The Abbott government’s insistence on secrecy regarding boats carrying asylum seekers has been justified as “not wanting to act as a news service for people smugglers.” We can’t tell them our tactics even though the size of our army and details of its weapons, the number and capability of naval ships and air force planes are widely publicised and reports and photos of towbacks and orange life rafts are all over the Indonesian press.

One wonders why they would not want to publicise intercepts as surely this would act as a deterrent both to the people smugglers and their clients. The excuse wears thinner when one remembers them posing in front of billboards and giving a daily commentary whilst in opposition. How come defence didn’t tell them to stop divulging information?

Is it so we can keep up the pretence that the boats have stopped? Is it so we don’t get busted breaking maritime laws? Is it so Indonesia doesn’t get cross with us for making it their problem?

And why this secrecy should extend to offshore detention camps is even more mystifying. Not only are we not allowed to know, the government doesn’t want to know. The few people who have authority to oversee the well-being of these innocent people who are seeking our help have been ridiculed, threatened, silenced, sacked, deported or ignored.

Government departments have been instructed to dehumanise asylum seekers. This is a very deliberate strategy.

Because if we did, we might wonder what we have become.

When, in Senate estimates in February last year, shadow defence minister Stephen Conroy told the head of Operation Sovereign Borders, General Angus Campbell, that he was ”engaged in a political cover-up” all hell broke loose. Julie Bishop said it was an ”outrageous slur, indeed libel”. The fact that this is a civilian coastguard peacetime exercise seems to have escaped them.

Which brings me to my question for today.

If we agree that operations need to be kept secret when dealing with asylum seekers (which I don’t, but let’s move on), why does that not apply even more so to our “war on terror”?

Before any invitation had been issued or agreement signed, Tony Abbott was announcing to the Australian media exactly how many planes and personnel we were sending to the Middle East, where they would be stationed and when they were arriving. He released details of how many flights were flown, how many bombs dropped, how many targets hit with film to accompany the daily commentary.

On the domestic scene, when hundreds of police carried out pre-dawn raids on a few houses, they filmed the whole thing including homes and handcuffed kids who were later let go with no charge, then gave this footage to the television stations and newspapers despite the innocence of these people. A plastic sword was taken out in a clear plastic evidence bag for all to see.

And why was the Sydney siege on live TV? Isn’t that giving a platform to a terrorist in a far greater way than Q&A did by allowing a person of and with interest to ask a relevant question? Did I hear anyone saying Monis is attention seeking which he clearly was. He wanted to speak to Tony Abbott who did as Ciobo did. He wouldn’t even take the call which is when the hostages got really scared.

“It was then that I knew that there was not going to be any negotiation and we were just left there. No-one was coming for us.” But they were certainly filming you, and filming those who escaped showing exactly where they were leaving the building. This apparently infuriated Monis. Where is the inquiry into the role this uninterrupted news coverage played both in the outcome of the siege and in promoting Monis’ message?

What about the newspapers that published the photo of the child holding a severed head – isn’t this crossing a line in giving the father attention and also very damaging for the child who they had no hesitation in identifying.

And how about Tony Abbott reading out in Parliament details from a video that had been made by two young men threatening to stab the kidneys and necks of a white person.

A high-ranking counter-terrorism officer said they had no idea Mr Abbott would reveal so much detail about the video and that it could potentially prejudice the court case.

NSW Bar Association president Jane Needham, SC, said if the matter went to trial, the court might find it “impossible” to empanel a jury unaffected by the comments.

“That could even mean the men would not receive a fair trial because the jury has already made up its mind,” she told ABC Radio.

Every day we are told exactly what the government is doing. How many passports have been cancelled, how many are fighting overseas, how many are suspected of aiding and abetting them, up to the point of showing maps of where they live during a photo shoot at ASIO headquarters. Since when did intelligence and police headquarters become television sets and photographic studios?

The Murdoch papers are full of photos of terrorists and their actions. Abbott and his chorus line are daily telling us everything they can think of about national security and terrorism even to the point of making stuff up. Abbott feeds into the mystique by his refusal to temper his language despite being advised that he is adding to the problem. He likes the sound of “apocalyptic death cult” – bugger the consequences.

Tony Abbott’s hysteria over Zaky Mallah has made him a household name. His public condemnation of the ABC has led to death threats and ABC employees being put in real danger.

So back to my question.

Why are we giving a very public platform to terrorists and detailing in the media every move we are making to combat them? Perhaps our newly appointed (by Abbott) Chief of Army, Lieutenant General Angus Campbell, could explain why talking about asylum seekers is forbidden but telling IS our every move is OK. Or newly appointed (by Abbott) head of the AFP, Andrew Colvin, in one of his many press conferences standing in front of flags with the PM, could explain why they have taken to filming covert operations to supply to the media and are happy to release the details of suspects, their families and addresses to the press before any charges are laid let alone trials concluded. Or newly appointed (by Abbott) head of ASIO, Duncan Lewis, could discuss the advisability of engaging in photo shoots at intelligence headquarters with sensitive documents on display when the alert level is high.

There is something quite odd about this latest decision to raise Australia’s terrorist alert level to ‘high’. I can’t see what it is supposed to achieve? Is there credible evidence that a terrorist threat is likely? If so, why let the perpetrators know that? Why tell them you are aware of their intentions?

This is what makes yesterday’s announcement by the Prime Minister, look suspiciously like a well-engineered stunt. By making the announcement in the company of the Director General of ASIO, David Irvine and the Australian Federal Police Commissioner, Andrew Colvin, Tony Abbott seemed, to me, to be playing politics.

Call me a cynic but that’s how I see it. My suspicion is that the government is testing the reaction of the public and will gauge that reaction through polls they will take this weekend as well as those commissioned by various media outlets. A positive movement in the polls immediately after such an announcement will tell them what strategies best suit their chances in the lead up to the next election.

The Prime Minister says there is no specific intelligence that tells us an imminent terrorist attack is likely, so what is the purpose of the announcement? “What we do have is intelligence that there are people with the intent and the capability to mount attacks,” he said. So what is new about that? We have always known that. You only have to go back and have a look at some of the news broadcasts of 2001 and 2002 to see that.

Immediately after 9/11 there were reports of suspicious characters of “Middle Eastern appearance” everywhere. There were scenarios that nominated which buildings were considered targets and media driven fear campaigns that implied boat people were the most likely group from which a terrorist might enter Australia.

A judgement by ASIO that the terror threat has increased here is understandable in the light of who they know has left Australia to fight in Syria and Iraq and who has returned. But in what way does advertising that judgement in the manner that they have, benefit ordinary Australians who go to football matches, go to shopping centres, airports, concerts and the like? Do we decide not to go? Do we hide under the bed? Of course not. We continue to go about our normal lives doing what we do. So why tell us? Upgrading security at major sporting events such as the AFL Grand Final and similar events is a ‘no brainer’ in a post 9/11 world. But this has been evident at previous Grand Finals, the Australian Open Tennis Championship, and the Melbourne Cup and, I am sure, at other major interstate events.

So why would you suddenly and very dramatically advertise it now?

One of the dangers with a terror alert like this is that, in some cases, some in our community may become excessively alert; they may allow their zeal to exceed their good judgement. They might see things which under normal circumstances they would ignore, but which now could trigger over-active imaginations leading to a reaction that could impact upon innocent people. That would make this warning counter-productive.

‘Lone Wolves’, so described by David Irvine, who have remained under the radar are not going to be bothered by an increase in public alertness. They would, most likely, use that warning to reassess the way in which they plan their attacks. 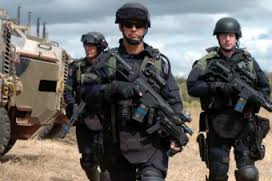 That is why I think this latest exercise by the Prime Minister smacks of political skulduggery. Our existing security organisations engaged in fighting terrorism are highly trained, well equipped and properly briefed. They have had over a decade to train and prepare. They are the ones who will maintain a vigilant presence and foil a terrorist plot, not you or I. They don’t need a nervous public overreacting, spreading fear and uncertainty, peering curiously at Muslim women dressed in the hijab; people who are simply going about their normal business.

That is why I think this looks fishy. It reminds me of the movie, “Something Wicked This Way Comes”, but I think it has less to do with a likely terrorist attack and more with a cleverly crafted plan by a political party and its leader to strike fear into the heart of the Australian community.