The following quotes are just a few ideas from Abbott and Rinehart:

“TONY Abbott has proposed banning the dole for people under 30 in a bid to entice the unemployed to head west and fill massive skill shortages in the booming resources sector.” The Australian, April 21, 2010

“Mr Abbott advocated all welfare-dependent families with children should have half their income held back for food and essentials.” The Sydney Morning Herald February 24, 2010

‘I was in Canberra last week and had the opportunity to ask Opposition Leader Tony Abbott whether a government under his direction would continue with the Rudd government’s goal of halving homelessness by 2020. His answer was no. In justifying his stance, Abbott quoted from the Gospel of Matthew: ”The poor will always be with us,” he said, and referred to the fact there is little a government can do for people who choose to be homeless.’ National Times, February 16th 2010

“Mrs Rinehart also suggests the government should lower the minimum wage of $606.40 per week and cut taxes to stimulate employment.” The Australian, August 30th, 2012

We don’t need class warfare rhetoric. What we need is a little consistency. 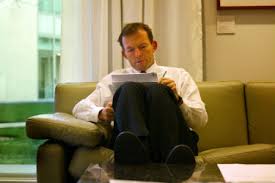 If only Tony Abbott were reading this letter (image by 4bc.com.au)

I notice that you’ve been getting a free run in the mainstream media over your whole career and it occurred to me that you are out of practice in responding to scrutiny. So I thought I’d do you a favour and scrutinise your supposed vision for our country, on the off chance that this experience might come in useful one day. Like, just say, if you become Prime Minister of Australia and someone dares to ask you what on earth you might actually do during your time in the top job. Assuming anyone cares.

Now bear with me as I examine your policies, as I do understand that you are very keen not to reveal these until the last minute before the election. So I’m just going to have to go by ideas that you’ve floated and talking points that your colleagues have mistakenly inserted in between the barrage of harassment, verbal abuse, smear and stunts that is your unique brand of Opposition conduct.

Let’s start with an important policy – the Carbon Price. We haven’t missed that you don’t like this policy. You resigned from Turnbull’s Shadow Ministry in 2009 in protest against his support of Rudd’s Emissions Trading policy. You won the Liberal leadership by one vote (probably Peter Slipper’s) by promising to attack this policy. You won the support of your fossilized front bench by mounting a mission to destroy the Carbon Price. And most importantly, you won the support of Gina Rinehart, someone who appears to hate the Carbon Price more than you do, by promising to ‘axe the tax’. This strategy has literally paid dividends to your party. So I can see, from your point of view, your opposition to this policy is a winner. But this is where I have a slight problem. It’s the whole ‘your point of view’ thing. You see, Tony, when I look at your policies, all I can see is that they are going to benefit you. You personally. When your policies also coincidentally benefit some of your rich mates like Rinehart, the end result is that these rich mates pay your party money to continue your quest to help them. Their support personally benefits you. You’ve made it very clear that you’re an ambitious person and you obviously desperately want to be PM. Tony Windsor has a voice mail from you that outlines this desperation succinctly. But here’s the rub. I feel you’ve also made it blatantly clear with your behaviour and ideas over your time as Leader of the Opposition that you are more interested in short term personal gain for yourself, than long term, difficult but ultimately beneficial reform for Australia.

Your Direct Action Policy is obviously bullshit and won’t go anywhere near meeting the emissions reduction target agreed to by your party. You don’t seem to mind that you’re attacking market based mechanisms (Carbon Pricing and the ETS), which is odd because your party is very fond of letting the market run free. Instead, you are advocating a centrally controlled, government funded scheme that will cost tax payers $30 billion dollars and would definitely be labeled ‘Communism’ by your friends from the Tea Party. $30 billion dollars, Tony, is a lot of electricity bills. And worst of all, you don’t seem to give a crap about the environment and the effect that Climate Change will have on my generation and future generations of Australians. (Notice how I used the word crap).

The Carbon Price was a difficult reform for the minority Labor government to implement. Good reforms are often challenging political battles to win. Successfully implementing the policy, of course, was made a lot harder by your anti-Carbon Price circus, but thankfully the Labor government prevailed, the sky didn’t fall down and Whyalla hasn’t been wiped off the map. In fact, emissions are already reducing. Good result! But rather than applaud this policy success, and acknowledge the good that it will do for reducing Australia’s emissions, and also the importance of acting as a responsible global citizen, you are basing an election campaign on a promise to kill this crucial, once in a lifetime reform. To deliver what exactly? Slightly cheaper electricity bills. So you’re appealing to the electorate’s lowest common denominator – their hip pockets – today – rather than being a leader and making the necessary tough decisions to ensure the safety and economic security of our nation’s future.

What about the National Broadband Network? Your so-called mate Turnbull is trumpeting this reform around town as a waste of money. Like a used car salesman trying to undercut a dealer down the road, Turnbull is offering a cheaper, lesser quality broadband network, in the place of the one that experts in the technology sector say is the only viable option for sufficiently increasing broadband speeds Australia wide. Getting the National Broadband Network right the first time, rather than paying less and installing a lemon, is, in my view, very important for the future efficiency and productivity of Australia’s economy. Your party likes to talk about increasing productivity doesn’t it? But again, you take the easy road to policy popularity and mislead the Australian public into thinking that you can wave a magic wand and fix everything with your supposedly bottomless pit of revenue. It’s clear that experts and you don’t see eye to eye. But I can tell you, the electorate is going to be rightly pissed off if you rip apart a high quality, revenue generating broadband network, and replace it with one that keeps Telstra in the arrangement, relies on rotting copper and will result not only in lower speeds but in tens of thousands of ugly fridge-like cabinets churning away on suburban streets and sucking power. That’s right, the NBNCo cabinets currently being installed around the country are small and don’t require power. The fibre being installed currently is waterproof, so it won’t cut out when an area floods (due to Climate Change) and will provide the fastest possible signal to most of the country. But you plan to replace this technically superior product with a dodgy ‘solution’ that will require a new coal fired power station just to run it, and will keep Telstra happily maintaining copper that is way past its used by date. In fact most experts are now questioning whether Turnbull’s Fibre-To-The-Node solution will end up costing more than the current NBN. It’s interesting to note that you don’t seem to give much thought to what might happen on the other side of September 14. There’s only one thing you care about. You and you being in power, right now.

I noticed that one of your policies (or so called ‘Discussion Papers’) about a northern Australian economic zone accidentally got leaked to the media this week. I see you have been busy denying that this plan will ever be put into practice, but excuse me if I don’t believe you. You see, we know how much Rinehart means to you (your pocket) and your future plans for your career. We know how important getting rid of the mining super profits tax is to Rinehart. Funny that you and your colleagues have been calling on Wayne Swan to resign because the Mining Tax so far hasn’t brought in enough revenue. Don’t you think this attitude is pretty rich coming from the party who has promised to get rid of the tax, and it’s resulting government revenue, altogether? No doubt you think you can get away with such hypocrisy since the mainstream media never call you out on anything. But we all know how much you would like to support Rinehart in her quest to pay little or no tax at all. So we can see that you’re working behind the scenes to bring Rinehart’s plan for this country to fruition. It’s really not a good look that you’d prefer to support Rinehart’s ever growing multi-billion dollar fortune, rather than sharing the benefits from the sale of mineral resources with all Australians. I think the electorate would think this was a pretty bad look too if the mainstream media bothered to make as big a deal out of it as they would if they had any professional integrity and journalistic skill.

The more I scrutinise the bare bones of un-costed ideas that claim to count as political policy, the better I get to know you Tony. You’re that five year old who takes the one marshmallow now, instead of deferring gratification in order to wait for two in the future. You’re offering the Australian people a magic pudding economy of higher government spending, lower taxes, a better economy, lower cost of living and no concerns about Climate Change, that anyone with half a brain can see that you have no hope of delivering. Yet you are so blinkered by blind ambition and selfish yearnings for personal success that it’s clear that you don’t give a shit about Australia. And this is why I think you don’t deserve to be captain of a CFS unit, let alone Prime Minister of this country.