A quick summary of the past three years:

“I’m not Julia Gillard, she wasn’t elected by the people but by the faceless men of the Labor Party, so vote for me.”

“I’m Julia Gillard. And I believe the following things.”

“I’m not Julia Gillard, so vote for me and I’ll stop the boats, abolish the carbon tax, reduce tax for everyone and get the budget back to surplus.”

“I’m not Julia Gillard. So vote for me.”

“I’m Julia Gillard. These are the things I want to do.”

“I’m Julia Gillard. AND YOU OFFEND ME!”

“I’m not Julia Gillard, so vote for me.”

“Yeah, yeah, I’ll do all that, and I have the added advantage – I’m not Julia Gillard.”

“…Ah… Julia should be PM, you weren’t elected by the people.”

Ok, that’s probably left a few bits out, but I think I’ve covered all the significant things that Abbott has said over the past three years. Voting, for a lot of people, is about perception. Kevin Rudd may be annoying, and remind people of their school principal when he’d try to show the kids that he was a “good sport” and could speak their “lingo”, but, for many, that’s the sort of person who should be running the country.

Abbott, on the other hand, has been suggesting that we need to have a change of Government. That Gillard and Swan need to be removed. In a way, that’s happened in the past week! No, no, complains Abbott, that wasn’t the change I meant. Mm, think the mob, that man is never happy. Of course, some will be thinking that he couldn’t get rid of Julia, but Rudd did. Rudd wins, Abbott is ineffectual.

Now, I realise that these are not sophisticated ideas, but that’s the point. There’ll be thousands of voters who switch based on their impression. Not on what they’ve read. Not on the detail of news bulletin. They’ll vote on what they perceive to be happening. “We wanted change, now we’re happy.” That’s why the Liberals flyer in my letterbox was telling me that this is the same Labor Government. Anyone who follows politics will know that; anyone who doesn’t probably won’t even read the pamphlet.

People do like to follow crowds and jump on the winning side. Will the swing back to Labor in the latest poll create an even bigger one in the next election or will the honeymoon period only last a week? I suspect the former, because Kevin Rudd now looks like a winner. Tony Abbott, on the other hand, continues to complain that we need an election now. It’s a simple message, and his supporters will agree, but I suspect that, for many, it’s starting to sound monotonous. Rather than sound like he’s keen to be Prime Minister, it has the faint sound of desperation. Politically, it also seems strange. If an election had been held straight away, the Liberals would have undoubtedly been saying that Kevin Rudd was worried that the cracks in the Government would start to show. Abbott’s constant demand for an election makes that line of argument a little harder to prosecute. “We want an election now, but calling one shows that you’re scared.” Surely, the Liberals would expect the sooner Rudd calls the election, the less time for his so called “honeymoon” to wear off.

Whatever, I’ve only noticed one poll appearing in the news in the past week. I wonder how many we’ll get in the coming fortnight. And I wonder if they’ll ask the question I asked last week comparing Abbott and Turnbull.

Contrast the Liberals approach with Labor’s:

Faceless Men are at it again, says Liberal ad as Rudd returns 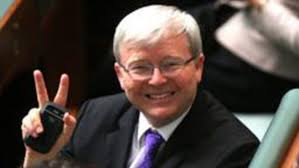 The media keep announcing that Kevin Rudd is PM again. He’s not!

He’s just been elected leader of the Labor Party. Julia Gillard continues to be PM until the Governor-General withdraws her commission. Which will happen shortly.

Then, it’s highly likely that Bryce will appoint Rudd Prime Minister, but she may wait till tomorrow and ask Parliament to demonstrate confidence in Rudd.

There is a possibility – not a probability, mind you – that Abbott will be PM by tomorrow. If so, I hope that someone asks him about repealing the Carbon tax on his first day as PM.

But at the time of writing, there is no certainty that the Governor-General will make Rudd the Prime Minister without his support being tested by the Parliament.

So, the blaring headlines: “Rudd Prime Minister again!” at the time of writing are just wrong. He probably will be, but it’s far from a certainty.

If the role of the media isn’t to explain things like this rather than announce what they expect to happen as fact, then they really have just become entertainers! We can’t expect them to inform.

Apart from the obvious differences such as Julia Gillard being a lady and Tony Abbott being a mere male, head to head how do they otherwise compare?

I have given this question much consideration and have come up with what I think to be a fairly accurate list.

Tony Abbott: Ducks and weaves or nods head to within a whisker of it flying off.

Tony Abbott: Dresses scantily, exposing as much skin as possible.

Julia Gillard: Has a sense of humour, laughs a lot.

Tony Abbott: Has a sense of outrage, snarls a lot.

Julia Gillard: Runs the country, no task too big.

Tony Abbott: Runs away, it’s all too hard.

Julia Gillard: Has the keys to The Lodge.

Tony Abbott: Hasn’t got the keys to The Lodge. A real sore point.

Julia Gillard: Wants to help poor people. Nothing in it for her.

Julia Gillard: Recognises we’ve been through the GFC.

Tony Abbott: Denies it ever happened.

Julia Gillard: Gets called a liar even though she isn’t.

Tony Abbott: Doesn’t get called a liar even though he is.

Julia Gillard: Has the guts to go it alone on QandA. Answers questions.

Tony Abbott: Doesn’t have the guts to go it alone on QandA (unless of course he could just sit there snarling, nodding and remaining mute).

Julia Gillard: Thinks before she speaks. Has the capacity to construct logical thought.

Tony Abbott: Has told the Queen we need an election. Has told everybody.

Julia Gillard: Is an atheist.

Tony Abbott: Immature. Needs to grow up. He can’t. Must be due to that time warp thingy.

Julia Gillard: Sensible enough to know that the sky can’t really fall down.

Tony Abbott: Expects it to fall at any moment. Looks for cracks after each Labor policy.

Julia Gillard: Has a map with Whyalla on it.

Tony Abbott: He hasn’t. He wiped it off.

Tony Abbott: Has a brochure.