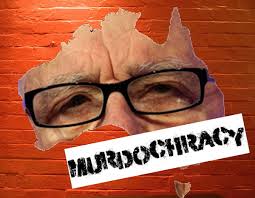 Nicole Clark looks at that propaganda machine – the Murdoch media (‘affectionately’ known of late as the Murdochracy) – and how it is determined to discredit climate science.

We are fighting a war on Climate Change in Australia, we are fighting a war against the strong scientific inference of climate change. It is a sad fact, that the absolute significance to changes in the earth’s climatic cycles are not acknowledged to the broader society.

Transnational media has been allowed to access false information on false pretences to formally and informally describe scientific consensus that is neither true nor conclusive. We are living in an age where it is these pretences that lead to the revulsions in public discourse. They perpetuate evidence to the people that anthropogenic climate change does not exist. We can attribute the gradual process of capitalist change to be an overt perversion of scientific reverence. Intelligent and scientifically minded individuals resist in vain, for the conservative social stance is both triumphant and celebrated, but why?

We can look to these clues with changes in social discourse, by examining the News Limited media. By examining News Limited we can incorporate a corporate capitalist phenomena, where an innate power for financial profit has lead to a democratic override, and the winner takes all. We are living in a time where neither a strong evidential basis nor bi-partisan approach will evoke change significant to stop the transgression of the multi-faceted 70% power distributed, Murdoch media. The shocking reverence of the situation is this: what you read, what you see and what you hear is all a representation of interpretivist opinion backed up by sceptics and conglomerate news bodies who seek to mandate public discourse – without true mass media approaches. These approaches are misrepresentations of facts and figures and bias which divulge the ever condensing incorrect views of climate change. These revered and conversely public trusted tabloids are the ones that are perverting the social justice. The very same justice that leads to the dilution and unstructured social opinion that not only persuades but integrates societal ‘know how’.

For those who are aware, this is what we know: it is not just the configuration of society that controls these aspects, and the dissertation of opinion underlying strong scientific background- as well as the complete and utter reverence that science can and should uphold. It is also something else; it is the greater understanding of complex concepts that are not transcribed in a proper ‘user friendly’ way or if transcribed at all. It is the external factor, the foundations of knowledge and the complexity of interpreting this knowledge to the people. I suspect the underlying consideration that we must address is the ‘denial’ and current ignorance that surrounds corporate body structures such as News Limited and the current Liberal Government and one Tony Abbott and their stakeholders. We can only deduce from these observations, a conformist acquisition, one, where media owned adversaries seek to ignore the evidence of climate change science for, their own initiatives for the favouring of their own financial gain.

For this idea to uphold, we must take into consideration the influence that transnational media can and does have on the wider public opinion. We must transgress this idea further, and consider the elements of . . . dare I say it . . . propaganda. Yes, propaganda! Consider this: it is not without thought that we go so far as to say, political factions of propaganda are truly evident in mass media.

Propaganda, whilst alluding the attitudes of political opinion also eludes the values and emotional upheaval of individual opinion; take for instance Adolf Hitler’s approach. As far as we know, we can see these attitudes transgress to the audience through the author’s personal epitomes and consumerist views. That is, through short worded slogans and repeated headlines that seek to optimize emotional and social relevance- often termed invoking the climate of fear, for example ‘Climate change not caused by humans” and “With Climate scientists like this no wonder we doubt”. A tactic that invokes contextual wording to interpret things that tug at fear and make people go ‘wow’, ‘The media doesn’t agree with experts why?’ But, does this transgress (mass media approach) to influence and persuade individual opinion? Does this really pervert public discourse?

YES and here’s why. We have only to examine the structure of hierarchy in Australian society, to exude confidence that indeed capitalist opinion has strongly and forthright berated the notion of climate change science. How, you ask? By decreeing the factual publication that follows it, in exchange for the more effervescent emotionally charged ‘writing on the wall’ and these short worded slogans are the misperceptions that invoke the general climate of fear. The wall has become no longer responsible for initiating freethinking thought or providing factual and progressive knowledge for adequate exploration of external stimuli, that is, exploration that provokes progressions in critical thinking before one accepts new knowledge. In place we have this wall, a safe cove r- a mask if you will, one that seeks to perversely calm and elude individuals away from real danger, pushing an agenda that ignores the kind of investigative thought that brought about the uprise of modern society, modern economy and scientific progression.

Indeed News Limited has exceeded these prospects, and further constructed a consumerist approach that not only constrains the individual, but also eludes them to the incorrect information that will eventually decimate social, emotional, environmental and political/democratic structure. News Limited will elude their audience to a point of no return in which case, we will see more than a group of troubled individuals with no free thought -but a group of troubled individuals that will vote according to these allusions that have propagated in their mass media world. The result you ask? Well, it’s a group of right winged zombies who neither understand nor amend their thought as to why they voted in such a contentious (conservative) way.

For all to see, News Limited got their wish, for the first time, democracy has failed and for the first time, transnational media came, crushed, killed and decimated an audience of free thinkers. News Limited poisoned their right to execute free thought or one that would favour their way of life. For the first time ever we see ‘tradies’, ‘parents’, ’single mothers ‘, ‘pensioners’ and ‘low-income earners’, vote against subsequent benefits that aim to target the particular struggle their respective bracket represents. What has Murdoch Media done? They have allowed Tony Abbot and his pack of liberal dogs to come forth for the kill and bring about the inevitable crumble of social justice. The Murdochcracy has created a new breed in society, once and for all-this new breed has gone against their own rights, their own free will and their best interests at heart- for favour of liberal conservative factions that aim to destroy the very things they are voting against . . . sound familiar? So, the political factions that were once opposition (for good reason), are thrust into power and News Limited epitomise these views with each passing day, so now, for the first time ever – a corporate capitalist structure has finally decomposed the walls of democracy and laid foundations of misadventure to the democratic right of the people.