Does your success owe nothing to luck, or circumstance? Then you probably think the poor actually deserve to be poor. Peter Barnes examines the conservative mentality that underlies the coming budget.

One of the great things about Australia is that any child can grow up to be Prime Minister.

Travel to any Western democracy and you’ll hear the same thing, with slight variations; the great thing about the USA is that any child can grow up to be President, and so on.

Which really makes you stop for a moment, because, hang on, isn’t half the population female? Isn’t that a bit weird, over a hundred years of Prime Ministers – twenty eight Prime Ministers – and so far only one girl has made it? Two hundred and twenty odd years of Presidents in the US – forty four Presidents – and so far only one person of colour has made it, and no girls at all?

Yet half of children are girls.

Perhaps there’s more to it than being a child and growing up.

While our constitution, our voting systems and our laws don’t prohibit any child from becoming Prime Minister, it’s painfully obvious that those aren’t the only things stopping at least half our children from achieving that goal. As Anatole France said a long time ago “The law, in its majestic equality, forbids both rich and poor alike to sleep under bridges, beg in the streets, and steal bread”.

Perhaps it helps to be a particular kind of child?

While we all may be born equal under the law, we are certainly not born with equal opportunity. Nobody can deny that a male caucasian child born to a rich family living in a capital city has some advantages; you only have to look at the faces in Parliament to see the truth in that. That’s not to say that any other child still cannot become Prime Minister; it’s just an unarguable fact that, so far, only one has succeeded.

That’s not the entitlement this article is about, however.

So, what other entitlement is there? Few would argue that, in general, your race, colour, gender, wealth, location and many other factors make it easier, or harder, for you to succeed.

It seems obvious, then, that circumstance and luck will play a part in any success – or so you’d think. But here’s the strange thing. Successful people don’t believe that. They might agree about it in general, but never in their own particular case.

How does it work?

There’s more. Having succeeded, they truly believe that anybody else could also succeed, if only they wanted to or tried hard enough.

In fact, they actually believe that those less fortunate deserve their misfortune! Why? Because they didn’t try hard enough.

The following poll comes from the USA, however the basic distinction between conservatives (Republicans) and liberals (Democrats) is also true in Australia. The poll asks the simple question: are poor people poor because of circumstances, or because of lack of effort?

Roughly half of Americans believe that poor people are poor because of their circumstances. However there’s a massive difference when you break that down by party affiliation. Less than 30% of Republicans think it’s because of circumstances, while over 60% of Democrats do.

Put another way, 57% of Republicans believe that poor people are poor simply because they don’t try hard enough.

Think about that. Nearly two thirds of conservatives think that poor people’s poverty is their own fault.

Which, when you think about it, could be translated into saying that the reason why we’ve had twenty eight Prime Ministers and only one female Prime Minister is that basically women just aren’t trying hard enough…

Another way to look at it is to observe that in the USA the top 0.01% of households earned an average of US$10.25 million per year. The overall average for the US was US$51,000. As Matthew Hutson points out in his excellent article, “Social Darwinism Isn’t Dead“, that logically means that the top households are 200 times smarter and work 200 times harder than the average household . . .

You hear stories about poor people who are successful “against the odds”, but strangely those odds don’t get mentioned when the more privileged are successful. It’s the same for arguments about intelligence, hard work, or any other quality. They don’t guarantee success, and successful people don’t necessarily have them.

Let’s face it, if you work hard and are successful you’d much rather believe that your success was due entirely to your own efforts and intelligence, and not just luck or good birth. It’s only human nature. It’s what follows that belief that’s dangerous.

So what’s the problem?

The problem comes when people with those beliefs – particularly when rich, successful conservative politicians – decide policies about social welfare, health and education.

Research here, and this article here, document how poorer people give more than twice as much to charity, proportional to income, as rich people. Simply put, the poor are generous because they know what hardship and privation are. The rich are not, either because they have no experience, or because they actually don’t think the poor deserve it.

Recent figures indicate that the world’s richest 1% own 46% of the world’s assets. And this research shows that, largely, they think they got that wealth because they’re better, and they deserve it. And the poor are poor because they don’t work hard enough.

If you’re conservative, or rich, or both, you’ll probably hold those beliefs. It’s not very hard then to see why you might not believe in age pensions, subsidised health care, unemployment benefits and many other publicly funded services. It’s not very hard to see why you would have no qualms at all in cutting back those schemes simply based on your personal beliefs and ideology, regardless of the economic circumstances.

The very way Joe Hockey uses the term “entitlement” clearly indicates that he thinks it’s optional, and its time is over. Of course an entitlement is a right, and most Australians believe our society has agreed that things like pensions and medical care are rights.

The following graph, again from the USA but likely to be repeated here, particularly on predictions of the coming budget, shows the change in cost of various goods and services over the last ten years. Chillingly, while “things” are getting cheaper, critical services like health and education are increasing in cost. Poor, unhealthy, uneducated people are not going to escape from this trap. 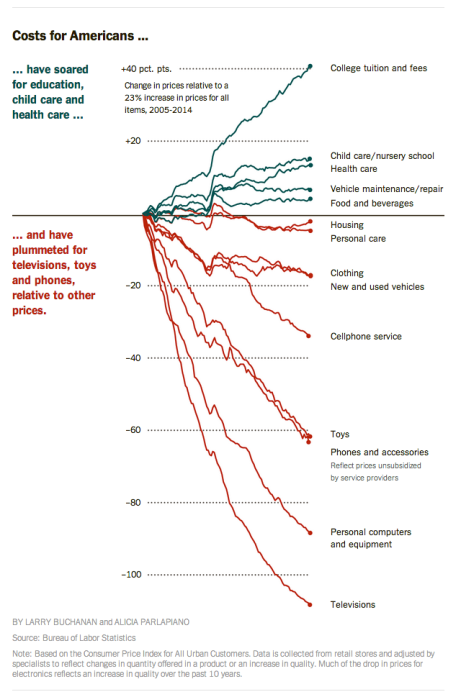 However the entitled don’t believe in a poverty trap.

In the article “Noblesse Oblige? Social Status and Economic Inequality Maintenance among Politicians“, Michael Kraus and Bennett Callaghan examine the policy and voting patterns in US government.

A scan of the benches in Parliament reveals many rich white males making our current policy decisions. Although parliamentarians represent us, they are not representative of us. For example, in the Australian population, about half a percent are lawyers by occupation. In the current Parliament, 60 parliamentarians, or 25%, are lawyers.

This is not a call to class warfare. Neither is it an assault on wealth. What I’m trying to point out is that there are well documented, honestly held beliefs held by conservatives and the successful that simply do not match up with reality. Those real beliefs, in turn, lead to policies that are generally harmful to people who are already vulnerable. If there’s class warfare, that’s its source. If there’s an unreasonable distribution of wealth, that’s where it starts.

So the Age of Entitlement is not over. It is over for the sick, the poor, and defenceless. It’s alive and well and built into the belief systems and psyche of a large majority of conservative politicians, and the conservative voters who support them.

We can trace the upcoming budget and all social legislation far more easily to the government’s personal and ideological beliefs than to any reality in the economy or the needs of the poor, the sick, the aged or the young. If those groups have problems, it’s their own fault!

In Australia a girl of colour from a poor background may one day be Prime Minister, but not while the current, entitled, incumbents govern, and the current incumbents truly believe that they’re entitled.

This article was first published on Peter’s blog infinite8horizon and has been republished with permission.