Your innovation package gives businesses more capacity to poach good people from overseas and it will also allow some foreign students to stay in Australia rather than take the skills they acquire back home. What do you say to Australians who might grizzle at that and say “Hang on, they are taking Australian Jobs.”

The first point I would like to make is Malcolm Turnbull completely ignored the question regarding businesses attracting more foreign workers. However, I thought I would check the percentage of foreign student’s studying ICT in Australia. According to the 2014 Selected Higher Education Statistics – 2014 Student Data (Australian Federal Government), the percentage of foreign students studying postgraduate ICT (as the level of study targeted by the Prime Minister) is 41.60%. This is less than half. Not over three quarters as the Prime Minister claimed.

Approximately one third of PhD students studying to write their ICT thesis are foreign students. The progression from undergraduate to PhD is not fluid, as in many postgraduate research students, will not have necessarily studied their undergraduate degree in Australia.

Many foreign Research Higher Degree (RHD) students review Universities from all over the world to select their University. This should be a reflection of the high quality of ICT research supervisors and programs in Australia, rather than this statistic being framed in a way that not enough domestic students are studying ICT at this level. We actually should be boasting that our ICT programs are attracting foreign students.

An increase in domestic scholarships including a living stipend for domestic Research Higher Degree students could very well see even more domestic students progressing into PhD level studies in this area.

More serious funding for universities to establish well developed university led women in science and technology programs, including properly funded recruitment and mentoring positions and more funding to employ more women ICT academics, could see the increase of more women engaged in this area of study. A serious investment in funding casual or better still, permanent teaching positions to free up existing women academics to do research would also assist.

I found it peculiar that Mr. Turnbull identified specifically postgraduate students in his interview, where he should be focusing on encouraging more students to take up ICT at vocational and undergraduate levels, if we are indeed talking about developing the innovators of the future.

I also found the focus on postgraduate students puzzling if his aim is to increase women in this area, when it is highly unlikely that women will enter through direct entry into a postgraduate program, based on the assumption that they are not working in the field and have not studied this area before. Women should be encouraged to take up ICT programs at undergraduate level and recruitment to engage women and all students should start from primary school.

All of these things take a commitment of serious funding. Will Mr. Turnbull and the Liberal Party actually act in good conscience on this, when they have not taken the Gonski reforms seriously? Gonski was a serious innovation in education reform and sadly it was not implemented by the Liberal party as the experts recommended. Its kind of like putting salt in a cake instead of sugar. It is still called a cake and you can say you have a cake, but it is a pretty useless cake.

I have posted the statistics below. I believe Malcolm Turnbull’s claim that over three quarters of students studying ICT in Australian Universities are foreign students is possibly incorrect. This is going by the 2014 figures. Perhaps 2015 has seen a stark increase in foreign students in this area. The 2015 data is not public on the ABS website or the Department of Education and Training website to determine this.

Mr. Turnbull could certainly be correct, if the scenario was for example a small increase in domestic postgraduate students in 2015 and a very high increase of postgraduate foreign students. Nothing is impossible. I certainly do not have the resources of the Prime Minister, but this certainly was not the case in 2014.

I think it would be great if journalists and ABC Fact Check would start checking more Turnbull facts. My personal opinion (and the reason I thought I would check this out) is that Mr. Turnbull does palaver on quite a bit with a decent smattering of verbosity. I feel this is to give voters the illusion that he is quite knowledgeable, but that may not necessarily be the case. 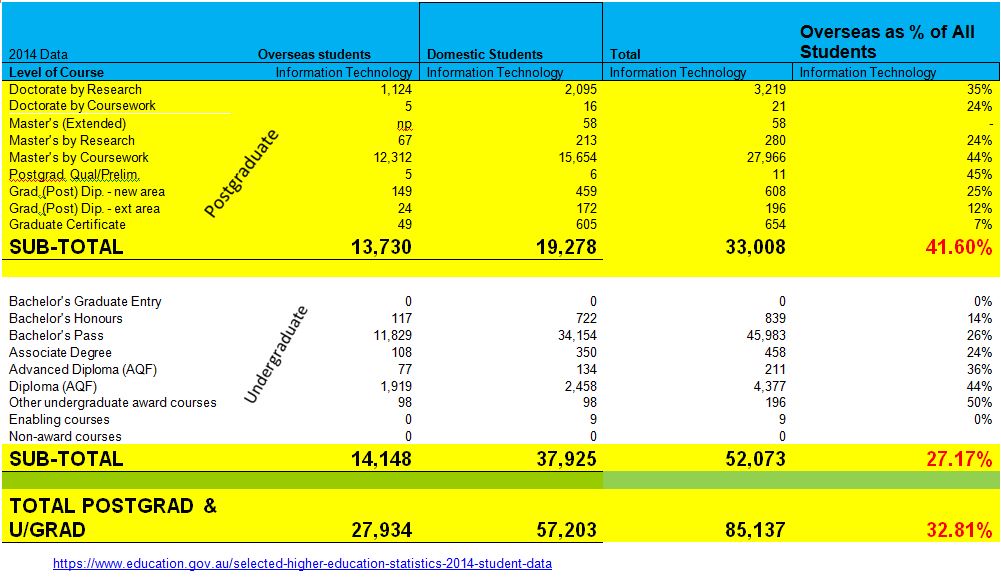 “Good morning, today in the studio we have the Minister for Hire Education, Mr Christopher Whyne. Mr Whine in August last year, you said that you wouldn’t be putting a cap on University Places, but today, we hear that you are?”

“What difference does that make?”

“Well, you can’t make changes from Opposition. Don’t be ridiculous, but now the big boys are back in charge, we can do lots of things we could do last year?”

“So, what you’re saying is that we can’t rely on anything you promised in Opposition?”

“No, of course not. We just said that we had no plans to make changes in a number of areas and, of course, we had no plans. Good heavens, we didn’t even have policies on most areas, so how can you accuse us of changing our plans.”

“So, what about Labor’s targets to ensure more people from disadvantaged backgrounds gain access to University.”

“Well, that sounds a little bit like class warfare to me. If people like that want to go to universities, why don’t they start their own?”

“Aren’t universities for everyone?”

“Well, yes, but we do want to ensure that there’s no drop in quality.”

“What about the changes to amenities fees? Many of the regional universities are opposed to this.”

“What you need to understand is we have a mandate. We were elected to run this country and that means we’re in charge, and if people don’t like it, well, they can always vote against us and elect a government like Labor who were just beholden to the faceless men and didn’t listen to the community.”

“But surely a mandate only applies to the policies you took to the election.”

“Our policies were a stronger economy, better government, stopping the boats from appearing on the front page and Tony’s daughters are really hot. I think this comes under one of those.”

“So basically you’re telling me that you have a mandate for anything?”

“Not anything. Just things that are good.”

“Has your party ever done anything that wasn’t ‘good’?”

“On that, when do you think you’ll have the budget back in surplus.”

“Certainly, not next year. Probably in the budget where sell off Medibank Private, and the rest of Telstra after giving them a fantastic deal on the NBN.”

“I said, ‘thanks for your time’. That’s enough for today.”