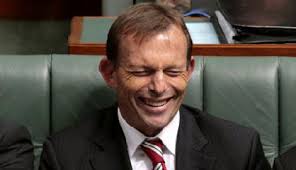 As Tony Abbott once said, “politicians are gonna be judged on everything they say”, (May 2010), and goodness knows, Tony has said some rather controversial things in the past. We are told that many of his more outrageous statements were those of a callow youth in different times, that he has learned a great deal, and changed his views on many things (some of them several times).

Now it’s not as if I expect Tony to be an expert in all fields. After all, “No one, however smart, however well-educated, however experienced, is the suppository of all wisdom,” (August 2013), and I realise that “sometimes, in the heat of discussion, you go a little bit further than you would if it was an absolutely calm, considered, prepared, scripted remark”, but Tony is rapidly clocking up an impressive list of recent quotes that makes one question whether a sow’s ear can be made into a silk purse.

To be fair to the new Tony, I have only included a selection since he took over the leadership of the Liberal Party thus becoming a prospective Prime Minister. The first quote below is an exception to this in that is was made a few months before Tony became leader but I have included it as being relevant to today’s “toxic tax” chorus.

Here are some of Tony’s pearls of wisdom on a range of topics – I call it my cringe list:

“The argument is absolute crap. However, the politics of this are tough for us. Eighty per cent of people believe climate change is a real and present danger.” – December 2009

“”The carbon tax is socialism masquerading as environmentalism…” – May 2012

“It’s a market, a so-called market, in the non-delivery of an invisible substance to no one,” – July 2013

”Well I think the official in question (head of the UN’s climate change negotiations, Christiana Figueres) is talking through her hat, if I may say so,” – October 2013

“What the housewives of Australia need to understand as they do the ironing is that if they get it done commercially it’s going to go up in price and their own power bills when they switch the iron on are going to go up, every year…” – February 2010

“If we want women of that calibre to have families, and we should, well, we have to give them a fair dinkum chance to do so” – May 2013

”A bit of body contact never hurt anyone,” he told the teens, sounding less daggy dad than dodgy uncle. ”Nothing wrong with a bit of modest sweat” – August 2013

‘If you want to know who to vote for, I’m the guy with the not bad-looking daughters” – September 2013

‘Where are the ladies, by the way?’ he asks. ‘There are some ladies in this delegation.’ – April 2014 in China

“He knows that we play our politics very hard in our country. And I think he understood.” – October 2013 re apology to Malaysia

“People seeking to grandstand against Indonesia, please, don’t look to do it in Australia, you are not welcome. The second point is the situation in West Papua is getting better, not worse” – October 2013

“Indonesia is in many respects Australia’s most important overall relationship.” – September 2013

“As far as I’m concerned, Japan is Australia’s best friend in Asia and we want to keep it a very strong friendship,” – October 2013

“We have always as a Coalition been against compulsory superannuation increases.” Press Conference, 23 March, 2012.

“We do not want to clutter up the G20 agenda with every worthy and important cause, because if we do, we will squander the opportunity to make a difference in the vital area of economic growth,” – February 2014

“Some of them will find it difficult, but many of them will probably be liberated to pursue new opportunities and to get on with their lives” – December 2013

”We honour the birth parents, including fathers, who have always loved their children.” – March 2013

Part of being a Head of State is to be able to think on your feet. Tony often does that by inserting his foot into his mouth. No wonder Credlin always sits within pinching distance.

Update: I forgot to include

“I was an opposition leader myself for four years; I know that that position has some exhilarations and some frustrations,”- November 2013 to Myanmar’s opposition leader, who spent 15 years under house arrest before she was freed in 2010