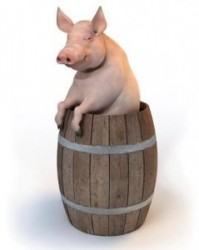 “Australians don’t want another election”, says Tony Abbott. Naturally, this reflects both his own achievement of the goal – personal power – and the government’s standing in the polls. For Tony Abbott, elections are not about fulfilling the will of the people. They are about putting the right people into government. The “right people” are already there, job’s done, so there’s absolutely no call for another election – even one that might strengthen the government’s own standing.

In any case, a new election at this point in the cycle would not suit the Coalition. It is standard political operating procedure. In your first year in office, you do the “Mother Hubbard” trick and use it as an excuse to bring in the most unpopular and difficult of your priorities. To some extent you can still trade off this dialogue for your second budget as well.

By the time you get to the third year in office, you need to start thinking about another election, which means you focus on what little tidbits you can feed to a battered population. John Howard was a past master at this cycle and it bought him three terms despite the most egregious betrayals of the electorate – including a “never, ever” GST. It was only the continued focus on Workchoices – introduced midway through a cycle and still “alive” at the time of the 2007 election – that ended his run. This was despite Howard’s late attempt, in mid 2007, to introduce a “sweetener” to his toxic IR platform, in the form of a fairness test.

This is actually a crystal clear example of the way the Coalition works: impose your ideological position early, and if required, water it down slightly by the time of the election. You still end up with most of your goals intact.

A couple of days ago Kaye Lee related the experience of a senior government official, who was confident the Coalition would win the next election: “The sweeteners are coming and that is what they will remember.” If this is true, then Australia needs an election NOW – before the Coalition gets the chance to bring about its full electoral cycle of “hit hard, then give ’em back some of what you took to win votes”.

This statement leads to consideration: what kind of sweeteners can the Team Big Australia realistically offer come 2016?

It is certainly true that the toughest changes in the recent budget are expected to come to pass later rather than earlier – either ramping up over the next few years, or budgeted to become active after the next election. In part, this is Tony Abbott’s self-limitation: his unwarranted promises not to impose changes to education, health, the ABC or seemingly anything else before another election. Those promises force Abbott to adopt a largely status-quo approach: no major changes for the first few years. How that must smart.

Politics operates on a long-term forward-planning basis, but it’s often not good at communicating that. See, for example, Labor’s MRRT, the proceeds from which are expected to ramp up significantly in the next few years. That won’t save it from the Coalition’s “barely any revenue” rhetoric or its intractible desire to repeal it.

Therefore, much of the pain of Joe’s budget, the budget that we’re all squealing so loudly about, doesn’t actually kick in until after the next election. Notable exceptions are the changes to Newstart / Youth Allowance eligibility, which start on 1 January 2015, and the medicare co-payment, scheduled to begin 1 July 2015. (Both dates presume the legislation can be successfully passed before those deadlines.) But many of the most painful elements, including the indexation changes to the age pension and the $80bn cuts to health and education payments to the States, aren’t expected until after 2016.

All of this indicates that come 2016, the Coalition has more pain in mind, not sweeteners. But lately, the conversation has notably changed tack.

Joe Hockey has previously stated that the 2014 budget is just the start. We don’t hear much said about this any more – the idea that the Coalition wanted to go further, cut more harshly. Instead, the promise of doing more, with the implication that this is necessary and good, has transmuted to an amorphous threat that more will come if Labor and the Greens don’t play ball and pass this budget. The conversation has changed. Instead of being the first step in a long-term dialogue with the Australian people, “starting a national conversation about how we can live within our means” as Hockey said at the time, the 2014 budget is now the magic pill that tastes bad but will make it all better by the time the next election comes around.

It seems like not too far a stretch to expect that the Coalition plans to begin handing out its incentives by the time the next election comes around. Again, what kind of sweeteners can it actually offer? And is there any possibility that they might be successful? Will the Coalition really “romp home” in 2016?

Having run so hard on the concept that “Nothing is for free… nothing can continue to be free,” it seems unlikely that they will offer to restore the social support structures they’re currently fighting so hard to dismantle. Changes to unemployment benefits, healthcare funding, and pensions are long-term structural changes. The intent is good even if the methodology is not; these are areas where ongoing expenditure must be controlled for fear of them outstripping the government’s ability to support them. It would be counterproductive for the government to offer to retreat from its changes, so it’s fairly certain that, once legislated, the six-month furlough of payments, the medicare co-payment, and the changes to eligibility and indexation of support payments will be here to stay.

They could offer more infrastructure. But Tony Abbott’s repeated mantra of being “the infrastructure Prime Minister” appears to be falling on deaf ears. This is partly because of the Coalition’s intent to artificially restrict the kind of infrastructure projects it will engage in, and partly because of a range of State Liberal governments backing unpopular or inefficient projects that lack the populist chops except amongst people who are already their strongest supporters.

Thus the Coalition is likely to find itself constrained by the time of the next election. Building more schools and hospitals will not be helpful if the funding for existing schools and hospitals has been gutted. By the time of the next election the promise of more toll roads is unlikely to be a big draw-card, and the Coalition doesn’t want to be engaged in building rail.

This leaves tax cuts: the perennial stopgap of conservative governments and darling of John Howard’s appeal to the battlers. Tax cuts are within the Coalition’s DNA – their raison d’etre is to reduce taxes, reduce government offerings, and reduce community support. For those who can’t prosper under those conditions, the Market Will Provide.

Past Coalition election sweeteners have included a succession of income tax cuts, company tax cuts, and bonuses – for instance, the baby bonus was introduced by Howard in 2001. The 2007 election campaign carried all manner of sweeteners – 9 billion dollars worth – if we would only give the Coalition another chance. In many cases these offerings were “me-too” responses to promises already made by Labor.

So any incentives the Coalition can offer are likely to come in the form of tax cuts. They might be named “bonuses” or “supplements”, and they might be one-time only, but effectively the government will offer cash, hand over fist. Labor’s offer to increase the tax-free threshold to $18k and adjust the tax brackets, effectively giving tax cuts to large portions of the electorate, will be entirely forgotten in the rush of joy we will all feel at the government’s largesse. Expect many congratulatory statements from Team Abbott about how we all “pulled together”, bore the pain, took our medicine and reached a point, thanks to the Coalition’s careful management of the economy, where we can afford the rewards.

But will sweeteners be enough to secure the Coalition another term? It’s been repeatedly said that elections are lost, not won. It’s certainly true that the past two changes of government have occurred in spite of offered sweeteners, rather than because of them. In 2007, as mentioned above, Howard offered more incentives to electors in addition to a concession of watering down his beloved WorkChoices regime, but that didn’t save him; public opinion was far too set against his government and Kevin Rudd led Labor to a resounding victory. In 2013, too, Labor had far more on the table than the Coalition, including the aforementioned adjustments to income tax that would have seen millions of Australians no longer needing to pay tax at all. Ironically, Tony Abbott’s repealing of this legislation means that many more people are paying more tax than they otherwise would. Regardless of the sweeteners on offer, voters resoundingly voted Labor out of power. Unfortunately, the corollary is that they voted Tony Abbott in, without ever necessarily being won over by his ideological intentions on policy. Labor warned the electorate, at length, about the likely outcomes of an Abbott victory. Tony Abbott blithely dismissed these warnings as political alarmism and promised that he wouldn’t be like that at all. So now that his reassurances have proven hollow, could the Australian people be hoodwinked a second time?

We’ve never seen a government with the trajectory of the Abbott government. Already it languishes in depths of unpopularity not traditionally seen until several terms into government and, usually, preceding an electoral loss. It would seem at least possible that One-Term-Tony could be a predictive term. Historically, Australians don’t vote governments out after only one term, but this government may prove the exception. It seems likely that the only thing that could save them would be an electorate that still thinks that Labor is unelectable by the time of the 2016 election, which is why rejuvenation and reform of the Labor party is so critically important.

If the Coalition is able to retain government at the next election, the faint consolation will be that it won’t take long after the election for them to tighten the screws further. Then we’ll be having this discussion again, three years later, and with each successive election the chances of Labor regaining power improve.

The question then becomes, how much damage will Tony Abbott and his fellows do to Australian egalitarianism and society?