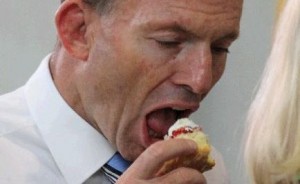 A term that originated on Usenet, Godwin’s Law states that as an online argument grows longer and more heated, it becomes increasingly likely that somebody will bring up Adolf Hitler or the Nazis. When such an event occurs, the person guilty of invoking Godwin’s Law has effectively forfieted (sic) the argument.”

A few days ago, I rather facetiously suggested that journalists could be rounded up as “illegal immigrants” and sent to Manus Island or Nauru if they asked too many difficult questions. Someone suggested that I should remember Godwin’s Law, and that I shouldn’t be comparing Abbott and the current front bench to Nazis, because once someone started evoking the Nazis, then one has lost the argument. (Actually, Godwin’s concept was that comparisons to Hitler and the Nazis frequently trivialised what they had done when compared to what was under discussion. For example, whether you believe speed cameras are revenue raisers or a safety measure, you can hardly compare their use to the Gestapo.)

Even though I wasn’t actually comparing Abbott and the Keystone Cabinet to the Third Reich, the comment did get me thinking. Yes, it’s true that people draw parallels with Nazi Germany far too frequently and that we certainly enjoy much greater freedom in Australia. Although the VLAD laws and certainly anti-terrorism laws lack the safeguards that would prevent me using them – should I become Prime Minister or Premier – to lock up Andrew Bolt and Tony Abbott. And anyone who objected to me locking them up.

However, I find the idea that we have nothing to worry about because the Nazis ended by exterminating several million people rather naive. We should always remember that the Final Solution was the Final Solution. It wasn’t where they started. And, while I believe that we won’t end up with death camps where we exterminate large numbers of people, I think that it’s wise to step back and look at what one is arguing.

One of my enduring memories was a man being interviewed on the radio at the time that Howard announced the restrictions on gun ownership after the Port Arthur Massacre. This person had been objecting to the proposals as a knee-jerk reaction and assuring the listeners that gun-owners were a responsible law-abiding group and that there was no reason to impose greater control on these people. Criminals and law-breakers would still obtain their guns illegally, so why punish these fine citizens who could be trusted. (So far, so good!) But then the interviewer mentioned that John Howard was going to tour country areas to explain his government’s position. At this point, the “responsible” gun-owner suggested that Howard shouldn’t come to his area because there was a lot of anger and there was no guarantee he’d be safe!! Mm, so can be trusted to only use guns appropriately, except when someone has made them very, very angry . . .

And recently, we’ve had a lot of similar stuff about the military. On one hand, we accept that they’re human beings who may occasionally stray. Stories of bullying, rituals, bastardisation, and sexual misconduct have all appeared in the media in recent years, yet when some people who are “attempting to break Australian law” accuse them of misconduct, we’re told that they’re just claims and if somebody makes a claim, there’s no need to investigate it unless we have evidence. Normally claims are investigated in order to discover if there is any evidence, but this seems to have been changed to a system where the proof needs to established before anyone looks into it – this principle should make police work a lot simpler. “Unless you bring us some forensic evidence that your house WAS broken into, we’re not going to open a file on your so-called burglary.”

Now I’m not making a judgement on the guilt or innocence in the burning hand claims. I’m merely trying to ascertain how one can dismiss an accusation so quickly. But the Liberals have been good at that. As Alex Downer argued when the AWB scandal was uncovered, he’d heard the rumours about bribes and corruption, but when he asked the AWB if they were true, the AWB said that they weren’t involved in bribes and corruption, so what more can you do.

And now we have the Liberals demanding Senator Conroy be sacked for suggesting that Angus Campbell was involved in a political cover-up. For those of you who don’t remember exactly what Conroy said.

Senator Conroy – It is a movie, and we’re living it, Colonel Jessup. I mean seriously, you can’t tell us the truth, you can’t tell the Australian public the truth because you might upset an international neighbour. That’s called a political cover-up,”

General Campbell – Senator, I feel I’ve explained the basis of my decisions

Now, apparently General Campbell was “extremely offended” by the comments. And Michaela Cash stormed out. For those of you don’t know or who’ve forgotten Senator Cash click here.

And someone commented the other day that Conroy shouldn’t go into any bars where ADF personnel are drinking. I don’t see why not. Then, for some reason, I remembered the interview with the responsible gun-owner.

Yes, we’ve entered a world where ADF personnel can’t be questioned or criticised, where we’re meant to adopt an Anzac Day/Remembrance Day attitude to the defence force all year round. We should just remember their sacrifices, be grateful and remember that they’re the ones in the front line in this war to protect our “sovereign borders”! This is not the time to show disrespect to our servicemen (and women).

FYI – Mike Godwin, of Godwin’s Law, has apparently tweeted that comparing Australia’s asylum seeker policy to the Nazis is not a trivialising comparison at all. I have not verified this so I’m only reporting rumour. If I’m not careful and continue to do such things, I’ll be a Canberra based political journalist working for a mainstream newspaper.