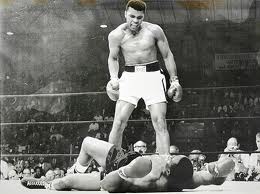 The ‘invincible’ Ali (image by servatius.blogspot.com)

Briefly, a recap on history. Muhammad Ali was almost invincible, but he was stripped of his medal for his refusal to be conscripted into the army. He fought the decision in the courts, and – after four years – was allowed to return to the ring. The time out of the ring meant that he was past his peak, and after losing to Frazier, he eventually defeated George Foreman, regaining his heavyweight title. I won’t go through all the fights, but I want to briefly mention the “Rope-A-Dope”.

Ali taunted Foreman in the lead-up, and Foreman fought the first few rounds as though he wanted to hurt Ali. Boxing, I know, is like politics – you are meant to hurt your opponent – but this seemed personal. And for much of the fight, Ali looked beaten. He wasn’t laying a glove on his opponent and he was absorbing punches to his body, but protecting his head and face, which is the scoring area. I can’t remember if it was Round 7 or later, but Ali danced out and started to fight back. Foreman was exhausted from all the body punches. It took a few simple blows, but Foreman went down. Ali had won.

I can’t help but think about this fight in the context of the current political situation. Rudd has been resting; Abbott has been trying to knock out his opponent, but he hasn’t succeeded. Abbott may have appeared to be great while on the attack, but does he have a defence against a fresh opponent?

Yes, there are things that trouble me about Rudd – I do think that he is a “whatever it takes” sort of man – such men are dangerous. But in terms of just looking at the “match”, I feel that he is dancing round the ring while Abbott asks the referee to make him stand still. Rudd’s latest asylum seeker move is designed to appeal to a particular part of the electorate – which it will. It will, of course, annoy another part. But I suspect most of us who aren’t sure that PNG is the answer will feel that it’s Abbott who’s mainly responsible for the politicisation of the issue. Abbott’s response: It’s a good idea, but it won’t work because we’re not the ones doing it! … Strangely, I don’t see that as a vote-winner whatever you think of the issue. If you think that boats are a bigger threat to Australia than almost anything you can name, well, you probably already vote for Abbott. If you don’t, and feel that this is obscene, then Abbott hasn’t won your vote back from the Labor Party, and when allocating preferences you’ll hardly preference a Cory Bernardi type ahead of a Doug Cameron.

” Ali’s theme this fight was to hang a nickname on Frazier as he had done to many of his opponents throughout the years. The name he chose was “The Gorilla”, and he rhymed out the singsong chant “It will be a Killa and a Thrilla and a Chilla when I get The Gorilla in Manila.” while punching an action-figure sized gorilla doll. “

“Debate me,” taunts Kevin, “you’re the boxer.” Abbott insists that he won’t get in the ring with Kevin until an election is called. Perhaps, he’s worried. Or maybe he’s just saving his energy for the next round.

Will the election be called on Monday? Or is this part of the Rope-a-Dope? “Let’s keep Abbott punching to the body, wearing himself out, but doing no real damage.”

Whatever – Abbott looks tired and devoid of strategy. Rudd looks ready for the main bout!