There is no arguing, Australia’s policies for dealing with refugees cost us a fortune. Off shore detention costs about $3750 per day, per person. Disposable orange life boats cost us a fortune, (about $7.5 million). To put that in a budget context that’s over $3billion of savings we could make right now, and that’s before one even begins to calculate the resettlement costs promised to Papua New Guinea or Nauru for taking on our responsibility.

But for all the talk of the persecuted innocents incarcerated or tax dollars squandered, there is a cost to us, as Australians, that is rarely spoken of; the cost to our collective humanity. The stories a nation holds about its self are a powerful force. It’s how we define our identity; it’s who we are as a people; and like most stories, tales of national identity usually contain a small grain of truth, mixed with a hefty dose of myth, metaphor and allegory, all neatly tied together with a sparkly bow of pure fiction.

While most of our stories are rousing, feel good little fables like, “Aussies believe in a fair go”, “Australians are great sports”, or “Aussies are an honest, down to earth, no bullsh*t lot”; many of our more common, jingoistic spiels are notedly less charming, such as; “asylum seekers are criminals”, or “asylum seekers are queue jumpers”. (These examples come courtesy of google auto fill).

Very rarely do we question where these ditties actually come from; they seem to just mysteriously appear in zeitgeist as fully formed epithets of some larger, unassailable truth. Without a second thought we attach them to our national identity and begin repeating them amongst ourselves ad nauseam. And what’s more, we are very attached to our little yarns abo­ut who we are and how it is; in fact a quick glance through history would suggest that we humans can be willingly led to the depths of hell in defence of our precious national narratives.

But every now and again some nebulous, imperceptible thing shifts; a tipping point is reached, and even the most rigidly defended of our stories give way to a new paradigm. It’s as if the vast majority suddenly wake up one day to realise the world is not as they thought it was; and they are not who they thought they were. This is rarely a pleasant phenomenon; for most nations it is usually the crystallising realisation that they are, (as a nation), significantly less good and right than they thought they were. Admittedly this doesn’t happen often, (most countries would rather wage bloody wars of attrition than accept that they may be on the wrong side of a long held ideology), but when it does happen its effect on the national psyche can be both persistent and profound.

To me Germany is one the most fascinating examples of this. In the early 2000’s I spent a few months writing in Berlin, and was really struck by the enduring resonance of WW2, a war that had ended some 58 years earlier. While cities like London have long since cleansed all traces of the war from their streets, Berlin -with an unassuming humility- bares her scars for all to see. From the holocaust photos on the remnants of the wall to the bombed out remains of the Kaiser Wilhelm Church, from the Jewish war museum to the rebuilt synagogue of the infamous crystal nacht, from her ubiquitous machine gun scars to check point Charlie, Berlin – for all her art and culture- provides her citizens with a constant, sobering reminder of the darkest aspects of their human potential.

Even though most Germans today where not even alive at the time of the holocaust, the war seems to have infected their national narrative with such a deep and abiding shame, (and the subsequent need for redemption) that their national discourse still remains largely dominated by ethical and moral imperatives.

And then there’s the USA. It’s over one hundred and fifty years since slavery was popularly considered a good idea, and yet the American story remains blighted by its legacy. To this day the anguish of slavery stalks the American psyche like a cancerous shadow that can never be fully excised..

While many Australians feel personally distanced from the stain that is the Tasmanian genocide, or the stolen generation, (probably because the vast majority of us are not actually descended from those responsible); I sense that we, as a nation, are starting to wake up to the fact that we can not shield ourselves indefinitely from responsibility for what is happening to innocent, persecuted refugees on our watch. I feel the worm is starting to turn and it will not be long until we reach the tipping point. Our rhetoric is changing. Even the most fearful and ignorant among us are starting to realise that the callous disregard with which we treat our refugees is extracting a price so high that it can not be measured or quantified; a cost far more profound than dollars spent, or the blow to our international reputation, (although that is undoubtedly taking a pummelling).

As the government’s veil of secrecy is slowly being prized off we are now starting to hear of our wilful neglect of sick children, of babies kept in scorchingly hot dormitories with not even enough room to learn to crawl, of the removal of medicines, spectacles and hearing aids, the reports of rape, torture, piracy and imprisonment in inhumane conditions.

With the UNHCR up in arms over such barbarity – even China is waving a disproving finger at our flagrant disregard for human rights and international law – the reality of what we are doing is starting to feel deeply and profoundly wrong, even to the most ignorant and cruel among us. Never in my life have I heard so many people declare that they are ASHAMED to be Australian, although this is hardly surprising. Given our current treatment of refugees there is no measure by which we can convincingly place ourselves on the right side of history/humanity, and deep down we all know it. People are waking up to the fact that we have, with our unbridled selfishness and cruelty, stabbed deeply at the heart of our nation; and in so doing we have inflicted a wound so egregious that our national sense of decency is now slowly bleeding out.

What both Abbott and Shorten fail to realise however, is that their current refugee policies are firmly aligned with yesterdays spin, a story born of Howard’s post 9/11 political opportunism, and supported, up until now, by fear mongering, ignorance and misinformation. But the tide is turning, today that story is vacillating, tomorrow it will be outright rejected for the shamefully barbaric atrocity that it is. 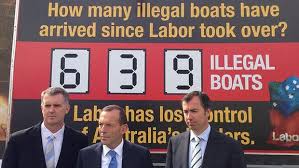 While I hold little hope that the coalition will shift on this issue, there is still time for Labor to cast a finger to the wind and feel the coming change in public sentiment. I for one hope that Labor can find the courage to come out swinging with a strong policy that favours decency, coupled with a powerful rhetoric that dispels the fear and economic irrationality that has surrounded the issue.