The Australian Council of Trade Unions (ACTU), in keeping with their reputation to doing anything to ensure that the nation’s workers receive their proper contractual award obligations, is going to the High Court to win sick leave entitlements for the workers of Qantas.

According to Scott Connolly, the ACTU’s assistant national secretary, the airline giant colloquially known as an Australian icon, and the giant red kangaroo logo usually being the first thing tourists entering Australia see when they go through the nation’s airports, has not been extending the sick leave entitlement to its employees for a number of years.

In some cases, it has been decades of Qantas workers allowing their sick leave entitlements to accrue, mainly due to the failure of Qantas’s front offices and human resources divisions to invoke its duty of care to extend those entitlements to employees who need it most.

One such hard-hit case is that of Peter Seymour, a 31-year Qantas veteran push-back/aircraft driver based at Sydney Airport who has been battling cancer since receiving his diagnosis a year ago, saying that the company has failed to pay out a single cent of his sick leave entitlement.

“I love my job but that was a huge smack in the face,” Seymour said on Wednesday, as the ACTU was announcing its High Court action with multi-union backing on behalf of the workers of Qantas.

“I was treated just like a number [by the company].

“I could not stay on JobKeeper because I’ve got bills to pay, so I was forced to take redundancy from the company. I’ve just turned 64 and I still have to work, I now have to find a job” despite his cancer diagnosis, Seymour added.

Instead, Seymour had to suffer the further indignity of being contacted by the company via an e-mail that he was being made redundant and forced onto the JobKeeper stimulus – which possesses a much lower rate to award to him than a payout from Qantas – in place of any accrued sick leave entitlement.

“Qantas’ behaviour toward the most unwell people in its workforce has been callous and illegal,” said Connolly, who also cited the case of one other unnamed Qantas employee who after receiving a diagnosis of heart disease, was also given the same fate by the airline company.

“That’s why we fully support this bid to have this matter heard in the High Court,” added Connolly.

The case – being brought under the auspices of the law firm of Maurice Blackburn on behalf of the Transport Workers Union (TWU), the Electrical Trades Union (ETU), the Australian Workers Union (AWU) and the Australian Manufacturing Workers Union (AMWU), all unions with vested interests among Qantas’s workforce – has found its way to the High Court after being rejected in the Federal Court last month.

Maurice Blackburn employment law principal Giri Sivaraman and the ACTU were united in agreement that this case being presided over by the High Court is bound to leave a precedent on workers’ rights cases over any sort of leave entitlements for years to come.

“This appeal is not just important for Qantas employees who’ve been unfairly denied access to their own sick, compassionate, personal or carer’s leave, it’s critical to all workers in Australia who may be stood down in the future,” added Connolly.

As expected, Seymour’s union, the TWU, is not only backing him but potentially countless others whose entitlements may become denied to them by any employer, and not one with the wealth of Qantas.

“Qantas has received over $800 million in [JobKeeper] taxpayers’ support to help it during the pandemic but instead of acting like a responsible employer in return it is trashing lives and trashing jobs,” said TWU national secretary Michael Kaine. 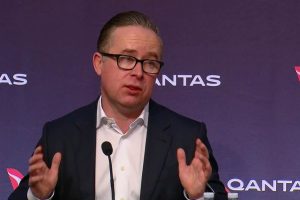 Qantas CEO Alan Joyce, whose company has received $800 million in government funding, JobKeeper and otherwise, during the pandemic. (Photo from abc.net.au)

And Kaine believes that any sort of government stipends, stimulus endeavours or other fundings should come with a strict set of terms and conditions, especially when workers’ lives and well-being remains at stake.

“Denying sick workers the leave they have built up and pushing them in some case out of their jobs in order to access redundancy payments to pay bills is utterly despicable.

“The Federal Government could tie conditions to the public money it is pumping into Qantas to force it to act responsibly but it is choosing not to,” added Kaine.

The other unions involved in the ACTU’s case remain resolute and defiant in fighting the case on behalf of all of its workers past, present and future.

“We make no apology for continuing our pursuit to right these wrongs. This is another very important step in the fight to ensure every worker in this country can access their sick leave when they need it most,” said Allen Hicks, the national secretary of the ETU.

“It adds insult to injury for sick Qantas workers who now have to defend their right to sick leave entitlements in the High Court,” said Steve Murphy, the national secretary of the AMWU, who added that the fight in the High Court amid Qantas’s decision could not come at a worse time in 2020.

“Essential workers stepped up during the year from hell, now Qantas is out-of-control, leaving it’s sick workers behind during their time of need – at Christmas,” said Murphy.