Really, there are times when I cannot believe what I am hearing from various members of our federal government. Never did I suspect that the present level of stupidity and incompetence could be so endemic within this extraordinary collection of misfits and idiots.

The most recent example is Christopher Pyne, Minister for Education and manager of business in the lower house. To the man’s credit he has worked tirelessly to have his bill to de-regulate our Universities passed in the senate, albeit to no avail.

Realistically, his multiplicity of amendments have shown his willingness to negotiate, but today, he made it indelibly clear on ABC’s Insiders when speaking with Barry Cassidy, that he has no intention of backing down on the principle of de-regulation itself. The bill with its changes will likely go before the senate this Wednesday.

De-regulation means increases in fees for students that will, in some cases, render a University education unaffordable, for others, carrying a heavy financial burden into their professional lives, assuming they are able to find appropriate employment when they finish.

This bill, if anyone needs reminding, originally included interest loans for students to be pegged to the bond rate, but has now been linked to the Consumer Price Index. It also contained a 20% funding cut to courses which now appears to be open to negotiation. 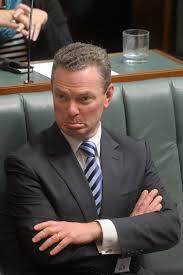 Today, however, Christopher Pyne made it clear that failure to pass the bill would mean the sacking of some 1700 scientists and researchers, claiming that if he cannot achieve savings in education, he will reduce funding for scientific research.

“There are consequences for not voting for this reform and that’s very important for the cross benchers to understand,” Mr Pyne told the ABC’s Insiders program.

What an extraordinary piece of audacity or is it blackmail? To hold 1700 scientists hostage and risk Australia becoming the ‘dumb country’ as Senator Nick Xenophon said, must be the most outrageous act of stupidity or recklessness in living memory.

With Labor and the Greens intending to oppose the bill, Pyne needs six of the eight cross bench senators to side with him. But with Senator Lambie in hospital, unable to vote and being paired, that means he requires six out of seven.

Minister Pyne must know that his bill will likely be defeated. To threaten the employment of so many as a consequence is highly provocative and not the act of a responsible minister. It smacks of bullying, it is juvenile and churlish.

To link the research fund to the de-regulation bill is cheap, tawdry politics. The minister has overstepped himself and it could well be his undoing. He plays a dangerous game.