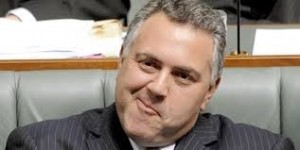 In a speech to the NSW business chamber, Mr Hockey promised a “genuine community conversation” about the demographic challenges facing Australia’s ageing population and the threat of lower economic growth without reform.

“There is a huge task that is ahead of us. If we want to remove the shackles, if we want to give people an incentive to work harder, to earn more money, to be more innovative, if we want to do that, we’ve got to start living within our means,” he said.

“Spiralling debt is not a legacy we can leave for the next generation. This is not the compact between generations we want.”

Well Mr Hockey, I’m up for the challenge. Let’s have a “genuine” conversation.

You have stated that defence is immune from cuts. Why?

According to the budget, the Defence Materiel Organisation’s (DMO’s) spend for 2014–15 will be approximately $12.6 billion. $6.3 billion will be spent on new acquisitions and $6.2 billion on sustaining our current equipment in this financial year alone.

However the budget contains a note that these figures are based on a US 90.30¢ exchange rate for US acquisitions. As the exchange rate is about 78c at the moment this means we will have to pay substantially more for our imported weapons of war.

The DMO will manage acquisition and sustainment worth about $50 billion over the Forward Estimates period, with only around 55 per cent to be spent in Australia. That means we are sending over $22 billion to other economies.

The latest Defence Capability Plan (DCP) contains around 160 projects, or phases of projects, worth around $250 billion out-turned (i.e. taking into account projected inflation rates and contingency). That’s a hell of a lot of money for a country that isn’t at war.

In the budget review it says that “The Government’s March 2014 announcement to acquire an unknown number of Triton Unmanned Aircraft System (UAS) from the United States has not been included in this Budget. The UAS has yet to successfully complete development with the US Navy.”

Why are we announcing we will buy something that hasn’t completed successful development?

Which brings me to Tony’s fighter jets.

“This project is approved to acquire 72 JSF aircraft and supporting elements to form three operational squadrons and one training squadron. This comprises 14 aircraft approved in 2009 and 58 approved in April 2014. The funding for the recently approved 58 aircraft and associated elements will be transferred to the DMO post the 2014-15 budget.”

Why were these not included in this year’s budget? And must we really have four squadrons of fighter jets? Liberal MP Denis Jensen has called it a dud decision saying “No one has had the balls to call a halt to it or to even call for a full capability analysis against requirements.” Do you?

One of the key programs mentioned is the “Future Submarine acquisition program which currently has an approved budget of $235 million. Of particular note, the Defence Portfolio Additional Estimates Statements 2013–14 (PAES) stated that the Government had ‘suspended work on Military off the shelf design options’ and would focus on Option 3 (evolved Collins) and Option 4 (new design) submarines. This approach was also confirmed in this Budget.”

What is the $235 million allocated in the budget for when we don’t yet have a contract? Do you really mean it when you say you aren’t buying off the shelf designs? And can someone please tell me why we need twelve submarines and what they will be used for?

Another key program to build three Air Warfare Destroyers (AWD), which has an approved budget of $7.8 billion with almost $5.2 billion already spent, has run over budget and is currently being assessed by an independent review team.

Considering, last October, that they disposed of almost 100 AGM-142 stand-off missiles costing about $400 million by blowing them up because they had never been used and they didn’t fit the new planes, do you really think more bombs, missiles and fighter jets are what we need?

Have you ever done a cost-benefit analysis of the return on money invested in defence? What military threat are we facing? Is it greater than the threat posed by climate change? How many lives are they saving compared to investing in health and research?

I know Generals and Admirals will always tell you they want new toys, but considering the staggering amount of money involved and that we are not at war, could you please tell Tony that he may have the fourteen jets currently on order and he may build 3 new submarines in South Australia to provide employment and stimulate the economy, but because of the state of the budget his allowance has been cut.