So, How Will You Do It Better?

A personal view of a failed democracy

I sometimes wonder if it is in becoming a parent, responsible for…

When Tony Abbott promised a “no excuses, no surprises government”, I must say I only half believed him. What I mean by that, is that I expected plenty of excuses, and because that’s what I expected, I didn’t think I’d be surprised.

But Tony Abbott has surprised me!

I really didn’t expect that anyone could be this incompetent.

As for the excuses, we have Paul Sheehan today complaining how Labor “booby-trapped” Australia’s future. He complains that Labor is blocking the carbon and mining taxes in the Senate, but overlooks Abbott’s blocking of the ETS in 2009. Only some things are a mandate apparently.

“And what do we get? Labor and the Greens opposing all four mandates, and everything else, and some of Labor’s booby traps already exploding. Rudd’s authorising of spying on Indonesia’s President and his wife blew up on Tony Abbott, who suffered further damage as he doggedly covered up for Labor. Labor’s multi-billion-dollar expansion into school education, a state issue, also exploded when Education Minister Christopher Pyne ineptly fumbled his attempt to rein in its costs and impositions.”

So there you have it, “Labor’s multi-billion dollar expansion into school education” which Tony Abbott promised to keep before the election wasn’t part of his mandate. Only the things that the Coalition truly believe are part of their mandate, and everything else is just something that you say to get elected. And surely, the voters know which is which!

You know, things like bringing down the debt, that wasn’t a “real” promise. And they’ve made a good start on that, by cutting $3 billion dollars worth of taxes that have been announced, but not enacted. “We don’t need taxes to pay off the debt,” they seem to be saying. “If only we could get rid of this MASSIVE carbon tax, we’d have the deficit ballooning out by so much that we could really complain about Labor… Oh, wait we’re the Government.. Doesn’t matter, it’s all Labor’s fault!”

Paul Sheehan’s article is so full of contradictions that answering it would be like allowing Mitch Johnson to bowl at a blind man. (Actually, not being able to see him may help the English batsmen.) Perhaps, he’s trying to outdo Bolt in the hope of boosting his readership, but somehow he just sounds like he’s making excuses.

Of course, he’s not part of the Government, so we can’t really hold Tony Abbott accountable for what some grumpy, old man writes to excuse the Coalition’s failings.

So, on the promise of repealing the carbon and mining tax, we have the excuse that it’s being blocked in the Senate. I suppose one could argue that’s a reason, not an excuse.

On “stopping the boats”, well, they’ve been very successful, haven’t they? They’ve slowed them, we’re told. But by only announcing arrivals once a week in a press conference that Morrison discourages the press from attending by announcing its location at the last minute, refusing to renew the contract of the Salvation Army to provide services to detainees and sacking the Howard appointed health advisory board they’ve certaining stopped the flow of information. Which is practically the same as stopping the boats, isn’t it?

And, anyway, it’s all the fault of the Indonesians. As Tony said, it’s high time they cooperated! I mean, we expected them to do that when we told the public that we had a good understanding about turning back the boats, and wandering in to Indonesian fishing villages with a wad of cash saying, “Who wants to sell their boat for twice what it’s worth?”

Again not an EXCUSE. A reason!

Christopher “Hey, presto!” Pyne had a neat little act with the incredible disappearing and reappearing $1.2 billion that sounded suspicious like an excuse to me. But Abbott stepped in and announced that Christopher didn’t know what he was talking about and there were no excuses needed because everything was going ahead, so no need to look at this closely any more.

Then we come to the NBN, which they aren’t going to be able to deliver on their promise of a 2016 date. Oh, and the costs have blown out.

“They were (cost) estimates done in the best of good faith from opposition,” he said.

“As far as the 2016 target is concerned, I’m very disappointed that the company is not going to be able to do that.” ‘

You see, the estimates were done in good faith. From Opposition. They can’t be held responsible for promises they made then. Sorry. ESTIMATES. Only Labor makes promises. The Liberals have aims, objectives, goals, aspirations, and ESTIMATES. And as for the target, Mr Turnbull is very sorry that THE COMPANY is not going to be able to deliver on the timeline that he ESTIMATED in Opposition. (Gee, I think he should sack the people running that Company and appoint more competent people… Oh, these are the more competent people that Malcolm just appointed. Better bring up your support for a conscience vote on gay marriage, Malcolm!)

There you have it, they’re all REASONS. I don’t know why some people keep calling them excuses.

I first published this before the election, but I think it’s time to shout bingo. 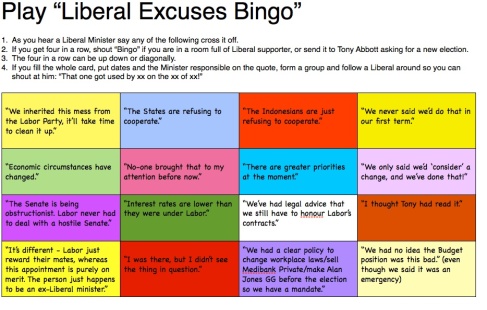 By Ad astra    Do you, like me, bristle as you hear the political class playing the blame game?Seldom have we…

Tony Abbott still makes me feel sick in the pit…