As fact is sorted from fiction about recent incidents involving members of Australia’s Muslim communities, I cannot but lament that the media is not making any effort to minimise the hysteria that is developing. Reporting events is one thing but to constantly speculate about aspects that have no foundation will cause great harm.

Publishing the wrong photo of the man who attacked two police officers in Melbourne’s South-East by the Fairfax media this week was disgraceful. The ramifications of such an error could have been enormous if any subsequent harm came to the innocent man concerned.

Prior to the 1990s, there was no issue in our country with Muslims. There may well have been an underlying, simmering degree of discontent in certain quarters. That is inescapable given that in our country, as in all countries, some cannot rid themselves from racial and religious intolerance. 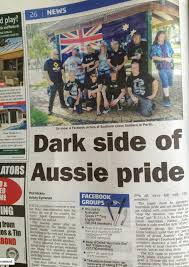 There are people among us who continually harbour a suspicion that those who are different and culturally unusual, are somehow a threat to our way of life. There are people who fear what they do not know. Ignorance breeds contempt. Many in the community are already spooked enough.

A man paying too much attention to his iPad causes Sydney Airport’s Terminal 3 to go into lockdown. A Virgin Airlines low level fly over at the MCG on Saturday, caused an AFP officer to reach for his gun. Who knows what went through the minds of those who weren’t expecting it. The AFL and Virgin management should have known better.

What has made our country so tolerant and so successful at peaceful integration in the past has much to do with our egalitarianism, the absence of a class structure and our layback approach to practically everything we do. In politics, up until 1996, immigration was always managed on a bipartisan policy agreement between the major parties. Had it been otherwise our population would not have grown and we would not be the success that we are today.

It enabled a post-Vietnam War exodus of refugees to seek a safe haven here with not so much as a whimper of opposition. They came in their thousands and in a matter of a few years had established themselves as hard working, diligent members of society. It was just what we needed.

Our already broad cosmopolitan make-up was richer for the experience. This could not have happened if either major party had objected. Our immigration and refugee policy was incredibly successful and neither political party made an issue of it. Prior to the 1996 election, an endorsed Liberal candidate in Queensland broke ranks and started an anti-Aboriginal rant that allowed that simmering discontent to rise to the surface. Her name was Pauline Hanson and such was the intensity of feeling in the electorate that she won the seat even after the Liberal party disowned her.

While there was righteous indignation within the party at what she had said, a subsequent anti-Asian rant was not lost on the Liberals. And when her One Nation Party had won over a large chunk of Liberal voters in a Queensland State election, too large in fact to be ignored, that was the beginning of the end of immigration bipartisanship in Australian politics.

Just 5 years later, John Howard seized an opportunity to win an election with the Tampa incident by appealing to the same racially minded mentality. It worked for him too. From that point on, to our national shame, the issue of immigration and management of refugees has become a game of political football.

But it wasn’t Asians that bore the brunt of this new degenerate attitude. It was aimed more at the religious than the geographical. And it was cultural. Greatly assisted by our engagement in a falsely contrived war in Iraq, the fear of Muslims became a dark, festering disease covertly encouraged by certain sections of the media.

This bred a sense of uncertainty leading to suspicion, alienation and eventually outward displays of dislike and rejection. Finally, it manifested into sporadic acts of violence by us which, as it happens, was the very thing we mistakenly feared from them. Now, radicalised young Muslim males are reacting. It should never have come to this. Not here.

This issue stands alone in our communities, and in us as individuals, as a failure of moral leadership; in religion and in community. Its nakedly, aggressive manner is a blight on a once welcoming nation and is covertly urged on by vested political interests.

In 2011, Scott Morrison, as Opposition Immigration spokesman, “urged the shadow cabinet to capitalise on the electorate’s growing concerns about “Muslim immigration”, “Muslims in Australia” and the “inability” of Muslim migrants to integrate.”

Democracy does not serve us well when elected representatives act in a manner that creates division. It is counterproductive. It may suit the interests of some but in the long term, everyone pays.