1 The Prime Minister’s and Minister Dutton’s responses to Senator Hanson Young’s objection to allegedly being spied on in Nauru was appallingly sexist and political overreach of the worst kind. For the PM to say she was “looked after” was insultingly gratuitous and condescending regardless of the rights or wrongs of the situation. And Dutton’s childish temperamental outburst was a reflection on his inadequacy as a politician. He should have stayed in the Police Force. Creepy indeed.

2 It has always fascinated me that unions can be so maligned for the slightest whiff of wrong doing yet business criminals like Bond, Skase, Elliott and others are considered by many to be folk heroes.

Did I see last night an advertisement promoting the budget? Is it taxpayer-funded? That would be a first.

Peter Dutton’s inability to get his facts right on the statement by Human Rights commissioner Gillian Triggs about Ministerial powers suggests that he is the last person to decide on one’s citizenship. Or anything else for that matter

1 As if to demonstrate, yet again, he and his government’s apathetic out of touch governess, Joe Hockey, the treasurer of Team Australia, in answer to a question about housing affordability said: “The starting point for first home buyers is to get a good job that pays good money”. 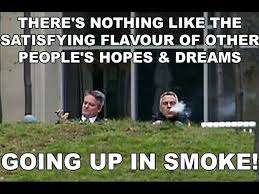 I would have thought it’s a problem easily solved. All they have to do is produce all the jobs they said they were going too. (Sarcasm intended)

2 The Abbott government appears to be running an orchestrated campaign to “destabilise or even destroy” the Australian Human Rights Commission, according to the nation’s first federal human rights commissioner Brian Burdekin.

They are at war with everyone who disagrees with them. Vindictive bastards. 3 Scott Morrison said: “If you say that you don’t get on board with the same-sex marriage bandwagon, then somehow you’re a homophobe or something like that – I don’t think that’s very helpful”.

“I think it’s time for people to have a bit of a breather about this and consider what the other options are.”

Could someone tell me what the options are to inequality? 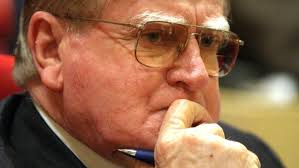 1 In NSW it seems Rev Nile is doing a deal with Premier Baird to get his Power legislation passed. It’s a sneaky Religious one of course. Parents of public school children will only be offered the Ethics course for their children AFTER they have turned down Religious Education courses. They won’t be told they are available on the course curriculum. Now that’s Christian transparency. Lying by omission.

2 “I’m for individual freedom … to the max. So you can imagine my profound disappointment, bordering on despair, when I see some on ‘my team’ thinking it is OK for a minister alone to take away a citizen’s rights – indeed, take away citizenship – in the blink of an eye. No appeal, no judicial process, just a ministerial decision. What were they thinking?” (Amanda Vanstone).

3 The conservative Christian forces in the Coalition are gathering their forces to confront Abbott on marriage equality. Extremists like George Christensen are determined to go against public opinion and govern for the minority.

4 NBN have let contracts to try and speed up its implementation.

5 Now hear this: Labor put in place laws that guaranteed 700 companies (including Packer, Reinhardt etc) would be more transparent in terms of tax liability. They respond by saying it would make them more susceptible to kidnapping, privacy, personal security and extortion. Without any evidence from any law enforcement agency to back up this assertion, the government decided to shield these companies from any disclosure. Rotten to the core.

1 “Even as a cabinet minister, sometimes it’s hard to pay a Sydney mortgage and I know over the years I’ve earned a lot more than the average person” (Tony Abbott).

If he finds it hard, what hope the average wage earner? Just as well he got free education and didn’t have to pay University fees. Gee you have to feel for his hardship being the world’s highest paid politician can’t be easy.

Meanwhile Treasurer Joe Hockey is selling his $1.5 million farm. Umm, it all reeks of privilege and elitism. And Glen Stephens thinks the housing market is crazy.

2 Scott Morisson said yesterday: “The institution of marriage came from religion. It was adopted by the state and I have always been a firm believer in the separation of church and state and the main reason for that is it protects the church – and I think the church’s institutions do need to be protected”.

He is factually wrong on the first count and on the second I am wondering what it is the church needs protection from.

3 Bill Shorten has moved to make the gender gap an issue for the ALP’s July national conference and for Labor more widely.

“At some time in the human narrative . . . in our history, man declared himself superior to women. It must have been an accident, or at least an act of gross stupidity. But that’s men for you” 1 The PM was certainly out and about yesterday. He described wind farms as visually awful and a danger to people’s health. Of course there is no scientific evidence to say people’s health is effected and no doubt he finds the sight of coal stations spewing their filth more aesthetically pleasing. I am an artist with a Diploma of Fine Arts. How anyone could say that Wind Farms are a blot on the landscape is beyond me. Thank God he didn’t pursue a career in industrial design.

A study conducted by the government’s own National Health and Medical Research Council recently found that there is no “consistent evidence” that wind farms damage human health.

On top of that he wishes a RET had never been implemented. His ignorance of the way the world is headed in terms of renewable energy is breathtaking in its arrogance.

His new-found frankness contradicts claims he and his ministers made before and after the election about how committed they were to renewable energy.

2 Good to see the Member for Gippsland (my electorate) Darren Chester has become the first National’s MP to openly throw his support behind same-sex marriage. Not much we would agree on but on this one yes.

3 Labor is considering changes to capital gains tax rules as well as negative gearing if elected, but remains tight-lipped about the policy it will adopt before the next election.

The PM responded by saying:

“If you look at what the Labor Party is proposing at the moment they want to hit your super with more tax, they apparently want to drive down the value of your existing home and now it seems they want to put rent up by fiddling with negative gearing”.

He neglected to say they plan to raid your bank accounts.

4 It seems AMEX has not paid tax in Australia for 7 years on a turnover of 8 billion. How is that possible? I wonder if Hockey might know.

5 This week’s Essential Poll is unchanged with Labor leading 52/48.

6 Abbott’s terrorist language is becoming more alarmist and sensational every day. The adults are still yet to take charge.

1 In denying to answer a question as to whether Australia paid people smugglers to turn boats back Tony Abbott has more or less confessed that we did. He just doesn’t like telling the truth. Does it then mean that we were complicit in people trafficking?

2 What a thoroughly detestable grub of a Prime Minister he is. A liar who will do or say anything that suits him at the time. His comments about wind farms are implausible. The one he referred to was on Rottnest Island, funded by the Howard Government, supplies 40% of the Islands power, and is perfectly acceptable to the residents. To say that they are ugly and noisy based on an experience some years ago is ridiculous. Any wonder international leaders call him a fool.

Must be Christopher’s turn next.

And this is the week that was. Well except that Bill Shorten made yet another speech about Australia becoming a republic. Perhaps he should just say that if elected a plebiscite is assured.

And I won’t comment on the Murdoch accession plan because its as clear as mud as to who is actually in charge.