After a string of ghoulishly inappropriate tweets it seems the irrepressible Rupert it is at it again. With very own his media empire poised and ready to dedicate swathes of precious air time to his every hashtag, it’s no surprise that the man cant keep his hands off his twitter account.

But given his latest round of tweets one has to wonder what on earth is Murdoch up to?

First he blasts Abbott for knighting that shining beacon of misogyny and casual racism that is Prince Phillip, and now he is saying Abbott needs to sack Peta Credlin?

I’m no great fan of Peta Credlin but blaming her for Abbott’s woes is like blaming a creme cake for Boko Haram. Admittedly she could have kept him on a tighter leash, but the reality is that Abbott is her boss, not the other way around, and if he is determined to go off like a loose cannon there isn’t really a lot Ms. Credlin can do about it.

While Murdoch’s call for Credlin’s scalp is understandable on one level, after all there is a well set precedent in Australian politics that powerful women are expected to clean up the messes made by the boys, and then thrown under a bus for their efforts, (Just think Joan Kirner, Julia Gillard, and more recently Sussan Ley, who – after Dutton’s abject failure- has been handed the delightful task of destroying Medicare… I guarantee you, give it 18 months and Ms Ley will be road kill), it is still a somewhat curious manoeuvre. 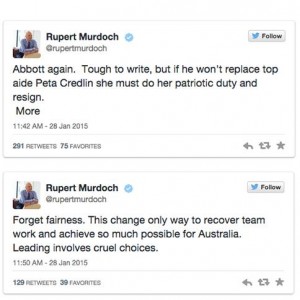 We all know that Abbott is Murdoch’s boy, bought and paid for, and no one would be surprised if Murdoch was suffering a touch of buyer’s remorse where Abbott is concerned. I for one would not be shocked if Murdoch, much like anyone else that buys a lemon, is desperately searching for an exit strategy that won’t leave too much egg on his face. But why would he slap Abbott down one day, and blame Credlin the next? Are we simply witnessing the random #’s of man who is getting on a bit and losing the plot, or does Murdoch have some kind of cunning plan?

Riding on the back of his media empire Murdoch currently enjoys great sway with the Australian voting public, but even he knows that in this social media age you can not take anything for granted. With the disgrace that was the phone hacking scandal in the UK, and the utter derision with which most of the USA views fox news (when Fox news can’t even raise enough votes in a racially polarised America to keep Obama out of office, you have know it’s a spent force), Australia is possibly the last place on earth where Rupert wields the kind of political influence he so clearly craves, and he certainly doesn’t want to blow it. Murdoch has now quite rightly assessed the public sentiment, and realised that sticking up for his man Tony is only going to erode his social and political capital. So what to do? Abbott is now so toxic, standing by him is clearly not an option, but who can Rupert turn to to be his new man in Canberra?

Trouble is, in setting a such a hideous policy agenda Abbott has managed to turn each and every portfolio into a poison chalice that is guaranteed to cruel the chances of any potential successor.

It is unlikely Scott Morrison will ever recover from his stint in immigration, George Brandis has been eternally lumbered with the racist tag (courtesy of the ill advised attempt at 18c amendments), Joe Hockey is forever blighted with his budget opus, Julie Bishop is a woman so forget that, and let’s face it Christopher Pyne was never going to be a saleable option.

What about Andrew Robb or Peter Dutton? Really? I don’t think so! And then of course there is the ever popular Malcom Turnbull, the only one who could probably save them, but Turnbull is way too much of centrist for Murdoch’s purposes, and he isn’t supported in the party room anyway.

So what is poor Rupert to do about toxic Tony, he can’t side with him, and he can’t find a suitable successor?

This is where the attack on Credlin starts to make sense. From Rupert’s point of view, (as the undisputed emperor of his very own personal 24 hour news cycle), it’s not hard to see how Credlin could make a credible scape goat for all Abbott’s stuff ups. She is powerful, she is a woman, she is unelected (which means no messy bi-election swings to have to explain away), and as she is largely attributed with Abbott’s successes surely it wouldn’t be too hard to spin her into the cause of his failures as well. 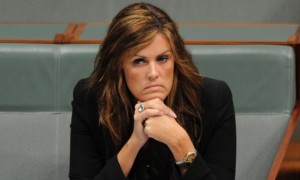 Will Murdoch be able to successfully to transfer Abbott’s stench onto Credlin, (because if his tabloids are anything to go by, he is certainly having a red hot go at it)?

To me it looks like Murdoch is throwing Credlin to the wolves in one desperate last ditch attempt remediate Abbott’s image. The question is will the electorate buy it?