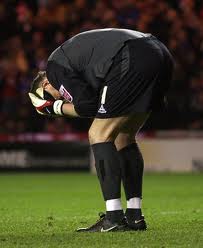 Over the past week or so we have witnessed examples of possibly the most mistake prone bunch of ministerial amateurs we have seen in the past 60 years. Each in their own way would qualify as a contender for the title, “Own Goal of the Year” award, should such a title ever become a reality.

Joe Hockey is claiming that Australia’s gold plated credit rating will be at risk if parliament fails to approve a path back to surplus. Joe is starting to sound desperate but I’m not sure if it has more to do with sharpening his leadership aspirations than his concern for the health of the Australian economy.

His comments to New Zealanders that our economy is in good shape are in stark contrast to what he has been telling us. His suggestion that our credit rating is at risk is simply laughable.

But now he is fighting off allegations that he was deliberately hiding budget papers prepared by Treasury that show low income earners to be bearing the brunt of the budget cuts. Did he not realise that we would see through that in a flash? One own goal.

Then, there is the Minister for Employment, Eric Abetz, who announced a revised work for the dole scheme requiring unemployed people to apply for 40 jobs a month if they want to receive benefits. That is spectacular in its absurdity. Professor Jeff Borland from Melbourne University says, “The international evidence is overwhelming. It’s hard to believe that the government couldn’t understand that this isn’t the best way to improve people’s employability.”

Professor Boland conducted an empirical study of the Howard government’s work for the dole scheme and concluded that such schemes are unlikely to help people looking for work. That’s hardly surprising. I could apply for 40 jobs in one week if I put my mind to it. Just how many replies I would receive is another matter. Just how many interviews I could attend if given the opportunity is questionable. Just how I would do all this while trying to fit in 25 hours of work for the dole is to question my capacity to replicate Superman. Abetz has even upset the business community. Collectively, they have voiced their concern that companies will be overwhelmed by job applications that could amount to 32 million a month. Pity the bulk of them couldn’t find their way to the office of the minister. I can’t believe Abetz didn’t see that one coming. Two own goals.

Now, we know that Social Services Minister, Kevin Andrews, wants to scrap the 90 minute rule that is used to determine how long is too long for someone to travel to work each day. Now, he is attempting to influence those couples in de facto relationships to get married for their own protection. Why the sudden concern now, or are his comments that de facto couples are more likely to separate, masking nothing more than Catholic Church teaching? His call is unlikely to result in any sudden rush to the altar though. His $200 coupons for marriage guidance have attracted just 1400 applicants from a budget of 100,000. Three own goals.

Attorney General, George Brandis and Communications Minister, Malcolm Turnbull are at odds over piracy laws. Brandis says that internet service providers were not ”innocent bystanders” and should contribute to the costs of an anti-piracy crackdown.
Malcolm says that rights holders concerned about copyright

infringement should sue those who illegally download material. One would have thought that such senior government ministers would have consulted one another before releasing statements that contradict each other. Neither seems to understand the internet very well. Four own goals.

Last week, Environment minister, Greg Hunt approved the multibillion dollar Carmichael Coal Mine development by Indian company Adani, which threatens the Great Barrier Reef. Hunt has incurred the wrath of Greenpeace which now plans to mount a campaign targeting any Australian bank that might be inclined to provide finance for the project. Putting aside Adani’s woeful environmental track record, Kate O Callaghan’s expose on the potential damage to the Great Barrier Reef and the dubious economic benefits to Australians spells out, all too clearly, that this decision will haunt Hunt for the foreseeable future. Five own goals.

But the “Own goal of the Week” must surely go to Tony Abbott for his ‘Leadership Call’ on the shelving of plans to alter Section 18C of the Racial Discrimination Act. It’s another broken promise and has even drawn criticism from trusted friends (Bolt, et al.). It has also caused great distress among Liberal party members who have flocked to their beloved Institute of Public Affairs (IPA), threatening to quit the party. Wow! Six own goals.

What a mesmerising collection of mixed messages that these utterly rattled and hopelessly confused people are sending out to the good folks in voter land; all of them, it would appear, determined to lead the charge to electoral disaster. I guess we can only hope that they will be spectacularly successful in achieving that.