“Good evening, Mr Turncoat, and thank you for agreeing to this interview.”

“Now let me just correct you here. It was my media adviser who agreed to this interview. If you can’t get your facts straight, no wonder you keep misquoting Tony Abbott about the ‘no cuts to the ABC and SBS’ that he’s alleged to have said.”

“But there’s footage of him saying it”

“Yes, but you have to put that footage in context.”

“And the context is?”

“It was in an election campaign where people were suggesting that we’d be cutting some of the programs on the ABC and, let’s be real here, we’re not in charge of the programming.”

“So Mr Abbott was promising not to cut ABC programs, as opposed to funding.”

“But didn’t you just say that you’re not in charge of programming? If that’s the case, then how could he promise that programs wouldn’t be cut?”

“Let me be very clear here. We’d been going around for months saying that there was a Budget Emergency and that we’d have to do all we could to get the Budget back in the black, so why would the ABC and SBS be immune?”

“You’d also said that you’d cut the Carbon tax, the Mining Tax, while maintaining all the concessions and benefits and that you wouldn’t raise taxes or cut pensions.”

“You changed the indexation arrangements so that future increases would be smaller.”

“See, we haven’t cut them. As you said, INCREASES. Pensioners will still be getting increases at the rate of inflation which is something our defence forces would love to be able to say.”

“On the subject of the “Budget emergency”, don’t you feel that it’s rather strange that one of the things you are doing is dropping the Carbon tax – revenue – and replacing it with your direct action scheme – spending? I mean, even if you don’t believe in climate change…”

“I do. I do believe in climate change.”

“You’re on the record as supporting an emission trading scheme…”

“Let me be clear on that. Tony Abbott is the leader and I support him one hundred and ten per cent.”

“Is this your way of avoiding facing up to all the things you said on an ETS?”

“I think you have to take what Joe said about a Budget emergency in context. After all, he wasn’t Treasurer and any Budget that the Liberals don’t bring down may take money off people who do all the investing and if you do that, you’d have to rely on the government to do all the investing and that’s socialism. Once you go down that path, you could end up like China.”

“Economically, yes. But would you really want to live in a country where the government listens to everything you do and the press isn’t free? Why, in China, the Chinese secret service could throw you in jail for revealing state secrets!”

“Couldn’t that happen here after the recent legislation?”

“Look, I don’t care what you’ve heard, the free trade agreement with China doesn’t entitle the Chinese secret service to throw anyone in jail… Well, not unless we agree to it first.”

“Just finally, in relation to Scott Morrison’s recent suggestion that the Minister for Immigration should be allowed to revoke the citizenship of any individual, even if they haven’t committed a crime, doesn’t it concern you that if Labor gain power, you could lose most of your front bench?”

“That’s appalling. I find that racist and offensive. Australia is a country that welcomes anybody. You only have to look at our record on 457 visas to see that.”

“We never had a White Australia policy. I think you’ll find that this is one of those myths like the stolen generation and Tony Abbott’s cuts to the ABC.”

“F*cking lefties, no wonder we’re selling you to Rupert first chance we get!”

“Nothing. And I’m sure that Tony’ll back me on that one!” 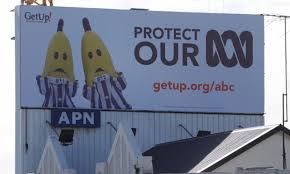