In this hard-hitting analysis of Australian democracy, the political parties that inhabit it, and other important components necessary for its existence, Mark Latham leaves the reader with an “if only” thought to reflect on.

That’s what I did before writing my piece Seriously, Is Our Democracy Stuffed?

If only we could look beyond our party affiliations and see that our democracy is in deep trouble.

Latham does so, and along the way gives his own party a decent serve, particularly its inability to construct an effective climate change debate based on factual evidence. He persuasively argues that to put the case where people saw it as weather, rather than climate, was wrong and he forensically reasons the way it should have been debated. In the process he takes apart people like Andrew Bolt and others who can only ever argue from a position of limited knowledge and say that “environmentalism” is a code-word for “socialism”.

The chapter on climate change will madden both sides but provides a good analysis of why the issue has degenerated in recent years.

There are a number of single issues that he addresses like the attacks on Gillard, (a whole chapter) the role of the media and its declining ethics, and the cult of personality. He does so with considerable gusto calling a spade a spade, not sparing a thought for the niceties of diplomacy.

Richard Fergusion of The Australian:

In true Latham fashion, a lot a space in this book is devoted to ripping apart old enemies and sneering at opponents. It’s a shame because under the rage and the bile and what looks at times like pure hatred, he does articulate a manifesto for governance that may intrigue people with a love of politics, even if it sometimes lacks coherence.

As I said Latham writes with a degree of straightforwardness but never indulges in hatred. But then Fergusion writes for Murdoch press so one would expect a degree of perfunctory mockery.

However the central tenet of his highly readable observations is that people have lost their trust in the system. That trust has collapsed.

He reckons that the average punter has turned off to the spin cycle, the hyperbole and manufactured outrage of people like Pyne and Abbott. The partisan politics that has nothing to do with the common good.

“Australians once trusted the democratic process. While we got on with our lives, we assumed our politicians had our best interests at heart.”

When Abbott came to power he promised to restore trust in Australian politics. At the launch of a book by Paul Kelly he said when asked about the state of our democracy.

“It’s not the system which is the problem, it is the people who from time-to-time inhabit it. Our challenge at every level is to be our best selves.”

The assumption in the answer was now that Labor, and in particular Rudd and Gillard were out of the system democracy would right itself. Nathan contends and illustrates that it is indeed Abbott as opposition leader and now Prime Minister who, by his actions and policies, has made the major contribution in the corruption of our democracy.

“Tony Abbott promised to restore trust in Australian politics but, as with most of his promises, it was dispensable.”

Still Latham maintains that both sides of politics are guilty of inflated or broken promises that only contribute to voter disillusionment. He concludes that the disillusionment with major party politics had given way to contempt, and leaders must adapt to a new reality: a more self-reliant, affluent and educated community that was less trusting of institutions, sick of old-style politics, and more attuned to the scourge of “spin”. 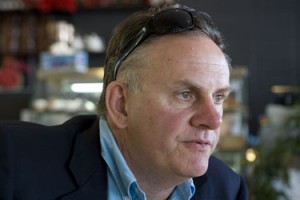 “We are witnessing a major disruption in democratic practice” (Mark Latham. Image from 3aw.com.au)

Latham says governments across the western world are struggling to deliver improvements for their people, with technological change and globalisation neutering traditional policy areas. In Australia the delegation of utility pricing to independent regulatory bodies and the advent of national competition policy has further reduced the role of government in economic settings.

“We are witnessing a major disruption in democratic practice”, Latham writes. “The formal structures of politics still function by their traditional rules and conventions, while the people they supposedly represent have moved on to a new world of self-reliance and institutional distrust.”

For all his criticism of the system and the people who inhabit it Latham doesn’t shy away from solutions. He lists 10 proposals for change that include the introduction of voluntary voting, on the basis it could force parties to develop policy ideas that captured public imagination, along with caps on election spending, transparency measures to expose meetings between lobbyists and ministers, and expansion of community ballots to widen input into the selection of candidates.

His 10 proposals for change include a prescription for arresting voter apathy – “the cycle of apathocracy” – is based on the belief that Australia “will never return to an era of mass membership politics and democratic participation”. Instead, party politics should be brought into line with public expectations: “less obtrusive, less grandiose, less pretentious.”

This is a most serious subject and this book is worthy of a considered read. It guarantees to please those like me who are in agreement with his premise that our political system has lost the trust of the people. It won’t please those with a right to rule mentality and for those who sit on the fence it might provide some answers to the ‘’what if’’ question.

If you want to read the 10 proposals click here.

‘A brilliant analysis of Australia in the era of Tony Abbott and fanatical right-wing politics.’ ROBERT MANNE

Mark Latham was the Federal Member for Werriwa from 1994 to 2005, becoming Leader of the Labor Party in 2003. Prior to entering Federal Parliament, he spent seven years on Liverpool Council in south-west Sydney. He is the author of eight other books, including The Latham Diaries (2005) and Not Dead Yet (2013).

Since leaving politics, Mark Latham has been a columnist for the Australian Financial Review and worked on radio and television as a political commentator. He lives in outer-south-west Sydney with his wife Janine and their three children.