For someone whose popularity was the envy of everyone in the new Coalition government earlier this year, Joe Hockey must be wondering what the hell happened. His pre-budget popularity among all voters was 21 points on the positive side (51% for and 30% against). Then came his first and possibly last budget. That budget is best described as a fart bomb, the aroma of which just won’t go away.

From that point on Joe has suffered from a lingering case of foot-in-mouth disease. Some of his revealing comments following on from his earlier, ‘end of the age of entitlement’ rant, and his dancing to the ‘best day of my life’ music, on budget night, include ‘poor people don’t drive cars,’ and just the other day a mind boggling, ‘we will find any way we can to take money out of universities,’ as said to Phil Coorey at the Australian Financial Review.

So, it’s pretty clear his star has hit a brick wall not just with the electorate generally, but with LNP voters as well. The odd thing is that Joe himself is genuinely surprised at how badly his budget has been received. So one has to ask, did he not think that being unfair to the disadvantaged would rebound on him? What was he thinking? Were the unpopular budget measures his idea, or was he encouraged to go down that path by others? Was he set up? One thing is for sure. The Treasurer owns the budget no matter who else contributed and Joe will own this one for years to come just like John Howard owned the 1982 budget that preceded Malcolm Fraser’s defeat in 1983. The full impact of Joe Hockey’s budget is yet to be realised because the economy is in much better shape than it was in 1982. That’s the good news.

The government, however, campaigned furiously on fixing the ‘debt and deficit disaster’ and that is the bad news. They did so not realising the nature of the problem which was, and is, falling revenues and excessive tax expenditures. They still don’t seem to realise it, or do they? They still want to curb spending but in fact are doing the opposite. Debt is steadily increasing. Perhaps that is why Tony Abbott wants a more mature discussion about the GST. They know they have to find some new money from somewhere.

Sooner or later the numbers will show them up as utter failures. They have already left it too late. And someone will have to accept responsibility for it. It almost feels like poetic justice that while Peter Costello benefitted hugely from a barrel load of money coming in from China and making him look so good, Joe Hockey’s barrel has shrunk to a tea pot and he is looking so bad.

Costello was never put to the test. Hockey is being tested severely right now and is not looking good at all. The analogy being, that when things are good the music is playing. When things go pear-shaped, the music begins to fade.

If the budget is ever to return to surplus, revenues must rise. That is fundamental. The only way that can happen, short of a revival in China, is to raise taxes and cut tax expenditures; the exact opposite of Abbott’s mantra about lower taxes. They won’t do it. What a delicious opportunity for Labor to exploit. If Bill Shorten and Chris Bowen can climb out of their lethargic slumber and show the Coalition up for the failures they are, Abbott will have to respond. 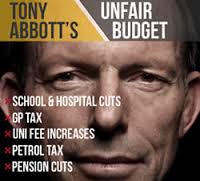 The likely response is to blame the Treasurer. That’s the way of politics. How long has he got left? Probably one more budget and if it does include tax increases of some description, Joe is screwed. If it doesn’t, by 2016 the Coalition’s economic credentials will be screwed and they will have to go.

The Coalition could have avoided all this last year by campaigning on Labor’s leadership failures and little else, but they had to engage in chest beating about the economy, pointing to their so called success while Costello was Treasurer. They chose to highlight, what seemed to be Labor’s economic failures. In reality, they shot themselves in the foot.

They didn’t hear the music fading. In 12 to 18 months’ time the music will stop.