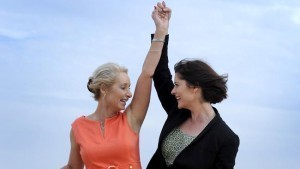 Thank you for your recent unsolicited advertising pamphlet. Unfortunately it contains a great many errors which I am sure you would prefer to know about rather than spreading incorrect information to your constituents, particularly since we are paying for your advertising.

You state that “Labor’s last Budget” projected a deficit of $50 billion in the 2013-14 financial year with no surplus over the forward estimates. This is entirely untrue unless Mr Hockey is a member of the Labor Party.

The last budget delivered by Labor in May 2013 projected a deficit of $18.0 billion.

In August Penny Wong and Chris Bowen released an updated Economic Outlook with a projected deficit of $30.1 billion moving to a surplus of $4 billion in 2016-17.

PEFO produced by Treasury and Finance in August agreed with the figures in the Economic Statement with a slightly larger projected surplus.

Three months into your term, Joe Hockey produced the MYEFO which estimated a deficit of $47 billion. To quote:

“The deterioration in the underlying cash balance since the 2013 PEFO is $16.8 billion in the 2013‑14 financial year and $68.1 billion over the forward estimates.

The deterioration in the budget position since the 2013 PEFO reflects two key factors:

– the softer economic outlook; and

Your projections about a “softer economic outlook” have proven unfounded, as many thought they would, with growth continuing at a better than expected rate.

The “essential steps” you talk about were spending decisions made by the Coalition:

We then move on to Mr Hockey’s budget brought down in May where we see that, since coming to office, you have borrowed an extra $50 billion – the gross debt has grown from $270 billion in September to over $319 billion. Your claim to be “reducing Australia’s debt” is rubbish as are the figures you use.

Now I have no problem with increasing the debt per se. What I DO have a problem with is you continuing to rail about debt and deficit as you continue to borrow money for the things you choose to spend money on.

And that is by far the greatest problem – not the spending but the priorities. You are inflicting dreadful harm on the most vulnerable in our society while choosing to spend a great deal of money on things we don’t need like school chaplaincy programs and marriage counselling vouchers and fighter jets and very expensive paid parental leave and Royal Commissions. These might be desirable in your opinion but they are hardly more important than education and health and welfare and jobs and affordable housing and childcare. You have cut funding to these most essential services and abolished advisory bodies.

You take money away from the Royal Commission into institutional child sex abuse to fund your pink batts political witch hunt.

You cut wage increases for aged care workers to provide bigger subsidies to the providers.

You cut wage increases for child care workers and cut the childcare rebate that parents will receive.

You make changes to the aged pension which, in the future, will increase inequity.

You give drought relief packages to farmers while disbanding water management groups and defunding research into irrigation and delaying the Murray-Darling buyback scheme, with no credible action to address the climate change that will send these very farmers to the wall. The photos of your party laughing and high fiving at the repeal of carbon pricing are looked on in disgust around the world.

You want to pay employers $10,000 to take on workers who are over 50 while telling our young unemployed that they must find a job or face 6 months a year with no income at all and cutting all the programs designed to help them find a job or suitable course.

You defund research causing many amazing programs with huge potential to be cut and scientists to leave our country.

You conscript a Green Army but then defund Landcare, the perfect people to oversee this group, and choose instead to give “service providers” tens of thousands of dollars per team and a free workforce who has no workplace entitlements.

You have slashed funding to Indigenous programs.

You have slashed foreign aid.

Yet you seem to have unlimited resources when it comes to searching for a lost Malaysian plane or fishing boats carrying a few refugees. And the defence budget just keeps on growing so fast they don’t know how to spend it all.

You promise me that my electricity bills will go down but I just got a letter saying prices will go up from July 1.

You say you are helping small business by reducing regulations. Tell that to small businesses involved in the health industry who will now have to administer your co-payment as well as GST. Will they have to fill in cards for concession customers and children to keep count of how many times they have paid a co-payment? Will you be developing and distributing the software to support this?

You claim to be saving $1 billion through cutting red tape for small business…could you tell me what you have done and how you came up with that figure? You cost us all money with the phasing out of the $6,500 instant asset write-off but I am yet to see anything that will help. Reducing company tax doesn’t help sole traders.

You say you are helping apprentices by allowing them to go into debt but you took away their tool allowance.

You say a new Commonwealth agency will open in Gosford bringing 600 new jobs to the coast. For starters, these aren’t “new” jobs as many people from the ATO have been sacked or will be offered relocation. Secondly, I notice you have steadfastly refused to answer any questions about this including why you are apparently building new premises when there are so many vacant already, and when this is likely to happen.

You will also need to adjust your boast about no successful people smuggling ventures. For my views on that I will refer you to Father Rod who was none too happy with the email you sent him from Scott Morrison on the eve of World Refugee Day.

“Firstly, I would like to say to Lucy Wicks that passing on this kind of misleading propaganda does your credibility no good.

Secondly, Mr Morrison has asked that I share this email. I do so gladly so that people may see this dishonest propaganda for what it really is. The use of language is interesting. The basis of this falsehood of that our borders are threatened. How can a few thousand weakened, terrified, dehydrated people threaten our borders? These Asylum Seekers are precisely that Asylum Seekers. They are not invading, or sneaking in or coming through the back door. The very nature of their journey means that the wish to declare their presence.

The entire foundation of the government’s policy is based on the lie that our borders are not secure. And this kind of propaganda is needed to sell the deception.

I have seen you asking Dorothy Dixxers in Question Time. Is that what we elected you to do? To read out lines you have been fed by others? You refuse to answer any questions and gag anyone who posts facts on your facebook page. Is your engagement to be limited to social functions, photo opportunities, and forwarding of party propaganda emails full of lies and distortions?

Your constituents deserve better than unthinking regurgitation. Our children deserve better from the future than what your party is offering. Do you feel no shame about leaving your children a society far worse than the one in which you grew up?

And before you start on the “Labor’s debt” line, I suggest someone in your party starts learning about Modern Monetary Theory and listening about the value of Job Guarantees and raising people out of poverty. Let demand drive supply and provide jobs. Your theory of trickle down economics is a proven front for those who facilitate corporate greed.