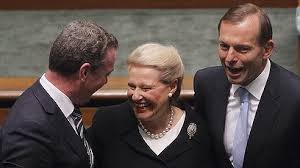 I swore I would never write again because of all the grammamatical abuse I received last time. But fair dinkum some, if not all, of the articles on your blog are just so misguided. So I want to put a few things straight. We won the bloody election and all you lot have done is complain.

Parliament is back in full swing and I must say how gratifying it is to have a majority of adult men leading the government in Canberra again. Yes, the adults are back in charge. People may call it a boys club but it will take men with balls to fix all the mistakes the feminists in the last government made. Men with character like our leader Tony Abbott and Scott Morrison. Shit when will you pricks wake up to the fact that Tony is the best thing to ever happen to this country?

And a speaker in Bronwyn Bishop who can recite the standing orders standing on her head in the midst of dangling petticoats. Now she is a women with balls and is displaying an unbiased approach to the job that has been lacking with Labor speakers.

Yes gratifying indeed. I was becoming increasingly concerned that all this talk of climate change was starting to be believed and that scientists actually knew what they were talking about. Fair dinkum if they want the truth why don’t people read more of Andrew, listen to Alan and there’s Rupert’s newspapers for unbiased reporting.

Goodness knows there are enough on our side to convince anyone. There’s no shortage of material. And their opinions are beyond reproach of course. Just ask any of them.

Anyhow now with the help of Clive and his puppies we will be rid of that that stupid carbon tax and thousands of new jobs will be created. Just you wait and sea.

And all this stupid talk about generating electricity from renewable resources can be forgotten. I mean really, what on earth is happening to our society? People need to turn their lights on more often. If Tony says Direct Action will work then people should take him at his word and trust him. I would. As John Howard said last year; his instinct is worth more than any amount of science. So I trust Tony on this one.

And all this talk of excessively wealthy mining magnets paying their fair share of tax. They pay more than enough as it is. That’s how the poor survive. Maggie said that’s how it would happen. By the drip down effect from the rich. If it hasn’t happened yet then they will just have to wait. Indefinitely if that’s what the economy needs. Don’t they understand that the rich need more money? They have larger bills to pay. Of course all the gossip going around that companies might have to treat workers fairly and pay them a living wage. I think everyone has lost all sense of appreciation that the wealthy supply the jobs and people should be thankful they do.

What about all this talk of equality of opportunity in education? The trouble is that people simply don’t understand their place in society anymore. They want more money spent on it. Well I pay enough tax as it is. What needs to happen is for people, instead of bludging, is to just get a job and work as hard as the rest of us. Then they could afford to send their kids to a good school instead of wanting everything for nothing.

All this crap about the budget being unfair. It was the fairest budget in fifty years. I mean what choice did Joe have? Someone has to pay to balance the books and it shouldn’t be those creating the wealth. People need to understand the stress involved in wealth creation.

Shit I worked so bloody hard this week overseeing my investments that I’m stuffed. Took me most of Wednesday morning which was convenient because I just had enough time for a round at Royal Melbourne before picking up the boys from the polo club.

We are just so fortunate to have a leader of the calibre, vision and character of Tony Abbott. I mean compare him with David Cameron who believes in human rights and tells everyone who is prepared to listen to stand up for them. I mean how misguided is that? And he believes in the science of climate change and reckons we should act. Bloody idiot. Doesn’t he know it’s just a green plot to replace communism? My brother’s best friend’s wife’s uncle, who works at Liberal Party head office tells me they have a team of ten trying to locate the headquarters and the leader of the plot. Rupert’s footing the bill.

And Cameron believes in marriage equality and has given the poofters what they wanted. Well it won’t happen here. Tony wears his faith on his sleeve. You can see his devoutness to Jesus and his preaching in his daily devotion to all Australians. We should all be thankful that he follows the example that Jesus set.

And I agree with Tony. We only need to know what we need to know. Operational matters on the high seas is for the Government to worry about. It’s none of the public’s business. I reckon Morrison (another follower of The Lord) would have thought of that. Anything to prevent people fleeing persecution. As Andrew is saying, especially if they’re Muslims.

Tony has the art of diplomacy. That’s why we call him “tough Tony”. Just like we called Howard “honest John” when he gave all those bottom of the harbour tax breaks to those of us who deserved them.

And good on him for standing up for George Pell at the Royal Commission. I mean the church doesn’t have an endless pit of money. I don’t know why people can’t just get over things. All this talk of compensation over a little abuse has gone far enough. The church has suffered enough from all the over the top publicity. George has been complaining for years but no one listens.

And speakin of Royal Commissions isn’t it illuminating, all these facts about Labor and the Unions? And they want one into the Com Bank. Don’t they realise people had freedom of choice? What more do they want from a party dedicated to the rights of the individual?

The one thing that really gripes me (well there a number actually) is all this talk about secrecy. There’s no point telling people bad news. They will become disillusioned. You only do that in opposition. Sure you can tell them about all the bad things Labor has done. The debt etc, etc ,etc, etc. That’s only fair. People just have to be patient for the good stuff. I’m sure it will happen even if I can’t put it in a time frame. And there’s always the next term. Or the one after. I’m sure Tony has great vision for the future of Australia and he will reveal it sometime in the future. As conservatives we believe in change, so long as it is not often.

Anyway, you probably won’t publish my letter. And it’s a pity because someone has to say these things. But I don’t think the writers and readers of this blog have the intelligence to fully grasp the wisdom of my words anyway. But then I was educated at Melbourne Grammar. You get what you’re able to pay for.

And someone should tell that fellow John Lord to get a manager. Hes been handlin’ himself to long.

PS: And give my love to Kaye Lee. She shouldn’t worry so much about what people think of her if she knew how little they did (sarcasm intended).

The Mongrel that is Murdoch