It’s been 43 years and 6 months since the election of the Whitlam government. Since then both Labor and the Coalition have been in government for the same amount of time (21 years and 9 months).

So how do they compare on managing the economy?

Jobs:
Annual employment growth was 0.216% higher under Labor. Given the size of today’s labour market that amounts to 25,710 extra jobs per year. Since 1972 565,000 additional jobs were created under Labor.

Growth:
Overall quarterly GDP growth was 0.03% higher under Labor. In today’s dollar terms that’s approximately $1.7 billion per annum. Over 22 years that accumulates to a difference of just under $40 billion, about $1600 per person.

Public Perception:
In a recent Essential poll, voters judged the Coalition better economic managers by a margin of two to one. 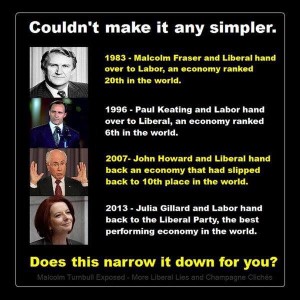