The Victorian State Election has become a defining moment for the LNP, whether they like it or not. The burning question on most Liberal minds right now is what to do with the dear leader, Tony Abbott.

On the one hand it is difficult to see the Liberals allowing Abbott to lead them to the next election. His propensity for appearing dysfunctional cannot be tolerated indefinitely. The odds that he will continue to embarrass his government in one way or another are very short. The likelihood he will change and assume statesman-like characteristics is a pipe dream. He is just so far out of his depth a submarine would struggle to find him.

And, historically the Liberals have limited patience for those who become an impediment to the image they have of themselves; an image of ‘born to rule’, of continued, ongoing governance of the peasantry. They know that sooner or later Abbott is going to drop another clanger either domestically, or on the international stage.

They also know the nation is, in effect, on 24 hour alert steeling itself as it waits for the next big blunder. The hope might be, within Liberal minds that as each blunder comes along we might start getting used to them and even become immune to them. Not likely. 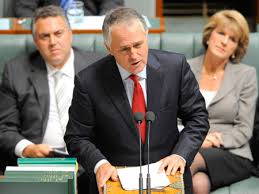 On the other hand, if the Liberals leave him there, keep him out of harm’s way and try to create a troika around Bishop, Hockey and Turnbull, it won’t be long before confusion, contradiction and back bench dissatisfaction cause a parliamentary meltdown. Whatever they do, Abbott will remain an electoral liability so toxic, the majority know it will send them back into opposition after one term.

But, by removing him they also paint themselves with the same brush they so savagely slapped over Labor when Julia Gillard replaced Kevin Rudd. The only difference is, we can all see Abbott’s dysfunctional nature. We would understand why he had to go and that might work in their favour. That small positive, however, is unlikely to work. The reason is that the options for a new leader are pretty ordinary. Whichever way they go, they are on a hiding to nothing.

At the beginning of the year Hockey looked the goods but it wasn’t long before he started suffering from foot in mouth disease and then, of course, he delivered his first budget, which turned out to be a self-inflicted blight on his aspirations for future leadership.

More recently, Julie Bishop has been seen as leadership material as she strutted the international stage, turning heads and getting pasted up in Harper’s Bazaar. However, we have not forgotten her foray as shadow treasurer at the beginning of the Rudd administration which saw her out of her depth too.

As Foreign Affairs minister we only get to see her in ten second bites shaking hands with other world dignitaries. It is difficult to see her holding up to the close scrutiny of national leader if she couldn’t cut it as an alternative treasurer. One thing is for certain; she is no Julia Gillard and that, sadly for her, is the current benchmark.

Which leaves us with the only other possibility, Malcolm Turnbull. While there are plenty in the party who would back him, there are more who simply won’t. It is questionable that he shares their ideology; many fear he might drag them, kicking and screaming, to the centre, away from Murdochism. That would leave them without a narrative.

And therein lies their dilemma, made even more difficult as their ideological approach to government continues to hit brick walls in the senate. Who would have thought twelve months ago that it would come to this ; the quickest act of political self-destruction in our history.

And how deserving of it, they are. 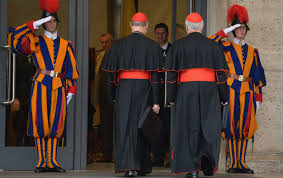 As I watched these pretenders parading themselves up and down the lower house chamber one day last week, I was reminded of the stench of arrogant superiority I witnessed in St. Peter’s Square in Rome some years ago watching the red hats of the Vatican do much the same thing.

And that, it seems to me, is who these ideologically, recalcitrant adolescents think, they are. These pompous overlords of Neo-liberal macroeconomics, these Reaganists and Thatcherite’s, the ‘trickle down’ team of wealth distribution. Only in the senate do they display themselves with any degree of humility and respect for the office they hold; a measure of their uncertainty and reliance on others beyond their control.

So, I say, let them continue to self-destruct and display themselves as they really are to those who voted for them; not their loyal members, their ideological clones, but the swinging voters who were sucked in by their lies, their spin, their false promises.

Let those who voted for them see what they got for their money. Let the 6-10 per cent of the electorate who decide elections squirm a little longer. Keep the dear leader in play for another two years as we watch the economy go headlong into recession and the false debt continue to grow.

Whichever way they go, we can be sure self-preservation will trump national interest and that, ultimately, will be their undoing.