The media, prompted by the Nationals, far right conservatives and Kevin Rudd, have decided that Malcolm Turnbull’s leadership must end.

The polls say Julie Bishop but they are, I suspect, heavily swayed by left wing voters aghast at the other alternatives.

Does she deserve this support?

Ms Bishop is articulate, well-groomed, and a fitness fanatic.

But what of the substance, the integrity, the judgement?

When given the role of Shadow Treasurer by Malcolm Turnbull in 2008, she lasted less than five months before being forced to resign due to dissatisfaction within Liberal ranks over her performance. She then moved to foreign affairs.

People say she is hard-working and she certainly travels a lot but, when you look a little deeper, so many of her meetings happen to coincide with her football team playing, or a gala ball, or fashion week, or the racing carnival, or the polo, or a celebrity event.

According to the article accompanying Julie’s photo shoot in Stellar last year:

Bishop’s enemies – and she does have them within her party, mostly allies of former Prime Minister Tony Abbott who believe, despite her denials, that she betrayed him – accuse her of being starstruck. They say she loves parties and globetrotting and celebrities a little too much.

And there are certainly endless photos to back up that view. 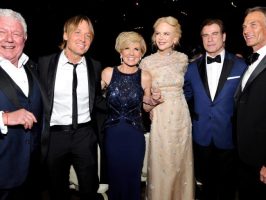 It is also said that the Foreign Minister presents a calm considered reaction but, when she gets cross, that seems to fly out the window as shown by her over-the-top attack on NZ Labour leader Jacinda Ardern when a Labor staffer inquired from a Kiwi counterpart about the law regarding NZ citizenship.

As the Coalition attack Sam Dastyari about his connections to the Chinese, they really need to be examining their own.

“Chinese businessmen with links to Foreign Minister Julie Bishop have donated half a million dollars to the Western Australian division of the Liberal Party during the past two years. All the donors have links to the Chinese government, and the vast bulk of the money was given by companies with no apparent business interests in WA.”

And let’s not forget the $100,000 donated by Yuhu Group executives to then trade minister Andrew Robb’s fundraising entity, including $50,000 on the day the China-Australia Free Trade Agreement was settled. Mr Robb’s former staffer Cameron Hill is now working for Yuhu. Robb now works for the Chinese company to whom he gave a 99 year lease on the Port of Darwin.

Julie has shown very poor judgment in the past about the people she promotes.

In 2006, Bishop was offered substantial donations to the Liberal Party by Tim Johnston, the Perth-based head of the fraudulent company Firepower International, who sought her co-operation in obtaining substantial Commonwealth funding for his operations. Bishop facilitated Johnston’s access to the Howard government at the highest level, compounding extensive official complicity and Austrade funding of the multimillion-dollar scam involving a non-existent fuel efficiency pill.

Then there was Bishop’s appointment of Bjorn Lomberg to her InnovationXchange. Emails reveal he was far more interested in assurances that all his travel costs would be paid for by the government than in what he would actually be expected to do. She also wanted to gift him $4 million to set up some sort of think tank except no university wanted him.

John Mashey describes Lomberg’s Copenhagen Consensus Center’s policies as a pattern of “profit-protective priorities, which might be cast as: kill mosquitoes and viruses, but burn coal, eat sugar, and thank you for smoking.”

In a December 2013 op-ed in the New York Times titled “The Poor Need Cheap Fossil Fuels,” Lomborg stated that Western nations “should not stand in the way of poorer nations as they turn to coal and other fossil fuels.”

Also appointed to Julie’s InnovationXchange was Sanjay Reddy, the son of Gina Rinehart’s business partner GVK Reddy. You will remember that Gina flew Julie and Barnaby Joyce to India in 2011 to attend the wedding of GVK’s granddaughter.

These are the people deciding how our ever-dwindling Foreign Aid dollars should be spent. 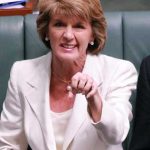 Julie also has a catty streak.

When Julia Gillard did a photo shoot for the Australian Weekend Magazine. Bishop accused her of behaving like a “fashion model or TV star” rather than a politician.

“I don’t think it’s necessary to get dressed up in designer clothing and borrow clothing and make-up to grace the cover of magazines,” Ms Bishop told The Sunday Times. “You’re not a celebrity, you’re an elected representative, you’re a member of parliament. You’re not Hollywood and I think that when people overstep that line they miss the whole point of that public role.”

Ms Bishop said posing for magazine covers was “not my style”, a view that sounded a lot like jealousy since she has subsequently done photo shoots for Who Weekly, The Australian Women’s Weekly, Vogue Australia, Harper’s Bazaar, Marie Claire and Stellar.

One former colleague says Bishop is not above using her femininity as an asset. “She can be flirty,” he says. “The persona changes, and the blokes like it. I’ve seen it work. She knows how to use it.”

Julie has made it very clear that she is “not a feminist”, telling Harper’s Bazaar that women should “stop whingeing and just get on with it.”

“Please do not let it get to you and do not become a victim, because it’s only a downward spiral once you’ve cast yourself as a victim,” Bishop told the fashion magazine.

As she teeters around Parliament in her Louboutin stilettos, the 61 year old Foreign Minister says she would “never challenge Malcolm”.

According to Peter Hartcher, the prospect of a Dutton takeover is probably the one scenario that would galvanise Bishop into contesting the leadership. Apparently, Bishop and Dutton loathe each other, but both are unlikely to challenge just yet.

Meanwhile, Julie will continue to grace the red carpet at celebrity events as she travels the world “living the dream.”