In challenging and winning the Liberal party leadership and the prize of becoming prime minister, he was responsible for sending a wave of relief across the country.

He got rid of an embarrassing, bumbling, ‘foot in mouth’ prone Tony Abbott and we were all extremely grateful. We immediately gave him the credit he deserved. Malcolm started by telling us how exciting it was to be an Australian. It was a bit corny but we went along with it, so happy we were that he wasn’t Tony Abbott.

Now, five months down the track and maybe five months or less out from an election, we are drawn to ask: is the gloss starting to fade? Malcolm appears not to be the Malcolm we were expecting. His innovative approach doesn’t seem to be leading anywhere. Even his normally easy going, relaxed flare in front of a camera and microphone has lost some of its sparkle. The government he leads is the same government Tony Abbott was leading. Nothing of substance has changed. The form has changed, we can see that and we are still grateful but if that’s all we get from a leadership change, why bother?

There are no new policy initiatives, no knock out, breakthrough approaches to solving the very problems his party insisted be urgently solved. It seems they weren’t problems at all. Debt, deficits, tax distortions, health and education, union corruption crises, all seem to be nothing more than a bad dream from a past life.

How do we know this? Because the media don’t talk about those things anymore. It seems all that doom and gloom we heard from Joe Hockey, the impending slaughter of our population by ISIS that Abbott warned us of and how important our new border force security was in keeping the flood of refugees away, isn’t front page news anymore.

So what is left? In case the government has forgotten, what’s left is good government. Where is it, we are beginning to ask. Have you noticed that the media, in their dutiful way, have now turned their attention to policies. Really? Except, on the government side, there aren’t any. And it shows, particularly now that Bill Shorten and Labor are beginning to steal the limelight with some really good policy initiatives.

So what does Malcolm do? He reverts to being Tony Abbott and tries to scare the wits out of us. He says, of Labor’s negative gearing policy, “Every home-owner has a lot to fear.” Oh, please, give us a break, Malcolm. That is just too melodramatic to be taken seriously.

Reading from the Liberal party script, other ministers have come out trying to discredit a good policy and are looking the poorer for it. Now the policy has been vindicated by independent modelling. The only home owners who have something to fear are the top 20% who have been flaunting the system for windfall tax breaks and laughing all the way to the bank. 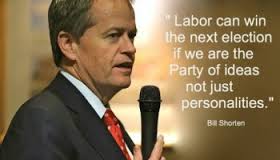 Malcolm has fallen for the Liberal engine-room spin and in the process is slowly stomping all over those credits we gave him for not being Tony Abbott, and he’s driving them into the ground. The attacks on Labor’s negative gearing initiative and Scott Morrison’s empty rhetoric at the National Press Club were so self-evident of a policy vacuum party in government, it has become clear that Labor has now grabbed the initiative and is off and running.

Perhaps the voters will forgive Bill Shorten for not being Barack Obama and start giving him and Chris Bowen some credit for showing the way on real tax reform.

After that, who knows?