Demand for ICT workers in Australia is predicted to grow by 100,000 by 2020 according to a report commissioned by the Australian Computer Society. That’s an average annual growth of 2.5%. Australia’s Digital Pulse produced by Deloitte Access Economics (DAE) outlines some of the challenges related to skills, jobs and education. 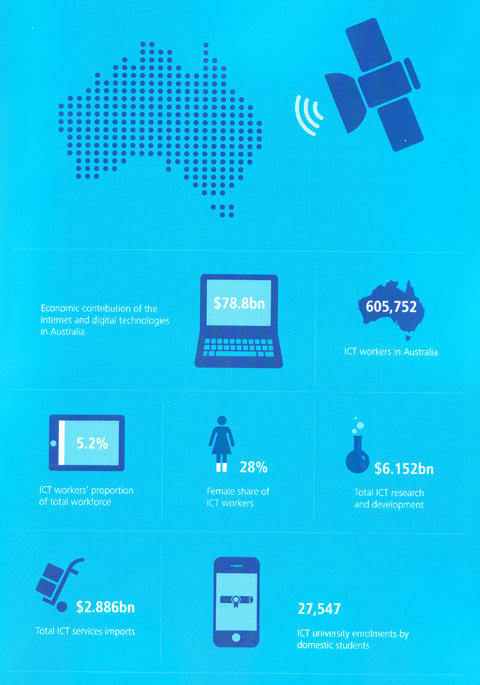 Those gathered at the Victorian launch on 8 July welcomed the report. According to ACS President Brenda Aynsley: “Victoria has a strong history of development in ICT and this is shown in the continuing growth in employment demand. An additional 3.2% to the ICT workforce is going to be required each year, right up until 2020. This equates to nearly 40,000 extra local workers needed over the next six years. With a sustained focus on digital education and training, Victoria will be better positioned to meet this high demand locally.”

However, she believes that it is “an urgent matter”.

Most of the audience were wearing their daytime uniforms, with grey suits predominating. However, there was nothing bland about the Q&A session after the presentation. Many in the audience expressed concern about the extent of the problems facing Oz ICT:

DAE has recommended “an increased national focus on growing Australia’s ICT capabilities and skills in the workforce”. When the report was first released in June, SBS’s The Feed concentrated on the workforce’s poor image in its segment Are TV nerd stereotypes holding back the industry?

Terence Huynh, aka the Tech Geek, is no nerd hiding in the backroom. His post Victoria needs 40,000 extra IT workers, according to new ACS data looks at the State data distributed at the Victorian launch:

Victoria will need 40,000 extra IT employees over the next six years in order to meet demand in 2020, according to new data from the Australian Computer Society and Deloitte Access Economics released today.

…According to the new local data, Victoria’s IT sector will grow by an additional 3.2 percent each year over the next six years – higher than the national average found in the Australia’s Digital Pulse report.

This will largely be due to the predicted growth in IT management jobs as a number of organisations are expected to base their organisations in Victoria. This was recently helped by Square announcing that they open an Australian office in Melbourne, and said they chose the city because of its “growing reputation as Australia’s technology hub”.

“Victoria has a large number of highly skilled workers, and as a result the state is an attractive place for leading edge companies to do business. What this report shows is that state based programs can deliver real results and because of this we are seeing the digital economy in Victoria reaching new heights,” ACS Victoria Chair, Craig Horne, said.

It was disappointing that there was not enough time for more discussion. The audience raised several hot issues including a perceived failure of government and business to take a lead.

More than one participant expressed the view that the 2.5% growth in the ICT workforce reflects a “pathetic trend” when compared with our international competitors.

If the sector is balanced some of 5 million Australian jobs tipped to go by CEDA (Committee for Economic Development of Australia), then it needs to get cracking. Ironically, the disappearing jobs will be the result of “technological advancements”.

This article was first published on Red Bluff.