While the spill motion two weeks ago was a point of interest across all demographics of Australian life, it has now morphed into something far more critical. Far from a handful of backbenchers calling for a vote on the leadership of the Liberal party, now practically everyone from anonymous cabinet ministers, shock jocks, business leaders, the man in the street, to some of Tony Abbott’s staunchest media allies, have joined the chorus.

This week, the second in the series of “good government”, senior ministers were sucked into the vortex of blunder, bluster and bedevilment, all trying desperately to get the ship back on course. But the more they tried, the more they failed.

The first week of “good government” began with what sounded like contradictory comments from the PM and his treasurer about the budget. Then came mixed messages about the future of the 1.5% levy intended to pay for the dumped Paid Parental Leave Scheme.

Then came Kevin Andrews and the Submarine fiasco, followed closely by the latest unemployment figures that revealed a 12 year high of 6.4%. That led to a debate about job losses and Abbott’s brain snap reference to the holocaust. By the end of the week, chief whip, Phillip Ruddock had lost his job.

By any measure you would think that a time-out would be called for and the government take a few weeks off to think about their tactical manoeuvring. Maybe they did take a minute or two, but what we have seen since shows an extraordinary lack of judgement on the part of somebody and nothing remotely like good government.

The second week continued where the first one left off when the Prime Minister’s attack on Human Rights Commission head Gillian Triggs turned out to be the mother of all boomerangs.

As HRC head, Triggs comes with some pretty impressive qualifications and experience. As lawyers go, there are few who could hold a candle to her. But it seems this minor detail didn’t stand in the way of the cretins in the government camp who dreamt up the plan to bring her down.

While her five year term doesn’t expire until 2017 the government decided it wanted her out now. Her ‘Forgotten Children’ report, a damning indictment of two governments on the treatment of refugee children in detention, had upset the delicate sensitivities of conservative propriety. It prompted Abbott, Brandis and others earlier this month to carry out a coordinated plan of attack to get rid of her.

In terms of monumental stuff-ups, it was a classic. Not only did they not think it through, but their approach was so poorly considered, so bullish and pugilistic, it resulted in knocking themselves out. They could have just taken it on the chin and accepted the reality of it. They could have pointed out that the number of children in detention now is considerably less than when they first gained office. If they did that, then all they had to do was promise to do better.

But no, they decided on a full frontal attack upon the person of Gillian Triggs. Both Abbott in the lower house and Attorney General, George Brandis in the senate let fly with a vitriolic outburst accusing her of bias and expressing a loss of confidence in her. Even Ian MacDonald took a blind swing. He said he had never read the report because he knew he would ignore it. Clever stuff, Ian.

It would appear, as they blustered and berated their way in parliament, that they never considered such an assault might backfire. They seemed more interested in the damage they could sustain. But when it was later revealed that Brandis had sent his department secretary, Chris Moraitis to broker a deal that would see Triggs employed somewhere else, the assault began to unravel.

Shadow Attorney General, Mark Dreyfus referred the matter to the Australian Federal Police for a possible breach of the law. Julie Bishop then became embroiled in the farce for an answer she gave in parliament and the matter became the story of the week for all the wrong reasons.

An opportunistic Malcolm Turnbull took the high moral ground and focused on the children. The resulting media coverage portrayed the government as a dysfunctional rabble.

So what does Abbott do? He deflects to the issue of national security in front of six flags. He tries to garner support by warning us of the threat of terrorism. Like we didn’t already know? Why six flags? Who knows? I suppose six flags looks more serious than the usual two.

I suppose they might have highlighted the threat of something immanent. But there was nothing in his security speech about which we were not already acutely aware. Perhaps Abbott thought it was worth a crack at deflecting from what was yet another “ragged week”. 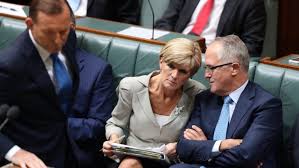 Whatever is passing through the mind of this man right now, he must realise his tenure as prime minister is all but over. My guess is, he still doesn’t understand why. Little wonder the leadership question was the main story over the last two days and is likely to be so for the start of next week as well.

While the PM watches the cricket in New Zealand with John Key, who knows what his senior ministers are planning for Monday.