Here I was all set to write about Donald Trump’s latest moments of brilliance. 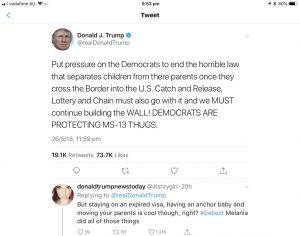 You may notice that he talks about children and “there parents”. Ok, in the scheme of things, it’s not such a big deal. However, you would think that as President of the United States, he’d be able to get someone to check what he’s written before he sends it out.

Still, if that were happening, then they’d probably have to point out all his factual errors and misconceptions… Like, for example, the concept that it’s his administration which has lost over thousand children, so criticising the Democrats for it seems a little strange. It would be easier to argue – as some are doing that – it should serve as a deterrent for those trying to get into the country. Come to America and you risk losing your chidren! You know, just the opposite of what do here when we hold children on Nauru indefinitely, keeping them with their parents until death do them part.

But my comments on Trump and his on again/off again soap opera with Kim Jong Un will have to be put on hold for a more pressing matter:

The defence of Barnaby Joyce!

It seems that everyone wants to get stuck into poor Barnaby at the moment. Even his colleagues are shaking their heads and telling the media that he’s lost all judgement.

Granted, taking $150,000 for an interview after asking the media all to back off because they’re breaching your privacy does seem a little hypocritical. And one could also suggest that it shows a certain propensity to sell your soul if the price is right. Yes, it’s true that it does make Mr Joyce look as though money is more important to him than a concern for the effect on his wife and daughters. And, yes it is hard to argue that his wife is in no position to complain given she’s the one who tossed him out just because he’d possibly fathered a child with another woman. Or that his daughters have no right to complain because… well, they’re girls and anyway, it’s really a matter for the grown-ups.

Now I know this may not be a popular view, but I think that it’s only fair to point out what everyone seems to be overlooking: Being hypocritical and valuing the dollar above everything are precisely the qualities that got him elected as Deputy PM, so why should he change just because he’s now a lowly backbencher?

Some people are even criticising the decision to put the money from the interview into trust for young Sebastian and suggesting that he’s only doing that to alleviate criticism.

Clearly, if the money weren’t put into trust for his son, then it would be part of his assets when the divorce settlement is made and he’d have to share it with his ex-wife…

I guess it would be a good idea to check my facts before I start shooting off my mouth.

I mean, it’s not like I’m US President or anything.

P.S. In the interests of clarity, the image is not one of Barnaby holding his new son.