With existing Australian emission control strategies insufficient to fulfil the modest commitments to the Paris Climate Talks (COP21), a new consensus-building around the issue of climate change should become the progressive agenda for 2016.

New Safeguard Mechanisms will be directed against the 140 worst carbon emitters from July 2016 under the supervision of the Clean Energy Regulator.

The modest achievement of the Emission Reduction Fund in 2015 can be acknowledged across the political divide.

The Emissions Reduction Fund in 2015 was highly attractive to rural and forestry sectors and land care after mining operations.

Implementation of the Safeguard Mechanisms to control the excesses of Australia’s 140 largest polluters from July 2016 will pose difficult challenges for the LNP with its traditional market orientation.

The challenges for Australia’s COP21 commitments are evident in the mismatch between actual attainment in emission control during 2015 and the broader range of carbon emissions which are not being covered by the existing abatement auctions.

This invites a return to some of the environmental problem-solving from the Rudd-Gillard Years which Malcolm Turnbull entertained as Opposition Leader.

1 The Spectre of a return to the Environmental-Economic Divide

In his address to the National Press Club on 25 November 2015, Environmental Minister Greg Hunt showed a willingness to return to the ideological divide between commitment to the environment and responsible economic management. The address included a serve against Bill Shorten for Labor’s more ambitious emission control targets which promised a 45% reduction in emission levels by 2030.

The serve came with a warning that penalties against emission controls on both electricity generation and industry would contribute to rising delivery costs and power bills.

COP21 has shifted the debate over global warming in Australia to the political centre around the precise commitment needed to move from traditional LNP market priorities towards sustainable social market goals.

The policy transition to incorporate the Safeguard Mechanisms after July 2016 might be a difficult one for the LNP. Labor can talk up its environmental credentials during this new transitional phase in environmental public policy.

2 Towards a progressive environmental consensus

It is in the national interest for Labor to seek greater bipartisanship with the LNP in implementing the commitments made at COP21. These commitments are an affront to a minority of conservative LNP representatives. Resistance to the forthcoming Safeguard Mechanisms can be expected from some sections of the business community who did not participate in the Emissions Reductions Fund. 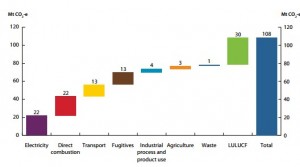 Resistance from the business community to proactive commitments by government also extends to creative accounting by major corporations to minimise legitimate taxation payments.

Most of the major polluters, particularly in the electricity generation sector, feature prominently in the ATO data.

The long-term trends in Australia’s emission levels show that there is an emerging bipartisan challenge for a developed economy with a very heavy environmental imprint that is amongst the highest in the world for a non-OPEC country.

The Department of the Environment has acknowledged the specifics of this environmental imprint for the period 2014-2020.

Bipartisan alternatives to any return to the carbon tax are available through taxation incentives, direct action and a continuation of market based strategies which underlie the Emissions Reduction Fund in an existing or modified form.

After the embarrassing cut-backs in the first two LNP budgets of 2014 and 2015, the LNP’s own National Innovation and Science Agenda Report still relies on data from 2011 to communicate the level of government investment in research and development. Consensus-building by the Labor Opposition can guarantee support for environmental commitments to become a more significant part of National Innovations for 2016-17.

A battery of market based, taxation and direct initiatives is available to reduce the impact of inefficient electricity generation, urban sprawl around freeway suburbs without adequate public transport and avoidable emissions from transport and resource production sectors.

Commitment to the environment can also be talked up at a household level with new initiatives in energy saving and a more thoughtful food intake to contain the obesity epidemic in Australia and most other developed countries. A greater intake of vegetarian food is an important way of lowering the environmental impact of modern lifestyles in the new suburbia.

The US statistics offer a rough guide to various food-print options from a country where personal levels of environmental impact are comparable to Australia.

The narrow definition of food-print vastly underestimates actual total levels of environmental impact from wider consumption, energy use and the other parameters of market-oriented consumer societies which generate almost 20 tonnes of emissions in both Australia and the US as measured by UN Millennium Development data.

The Climate Change Authority advised the LNP’s Minister for the Environment to take higher emission targets to COP21 and is largely in agreement with Bill Shorten’s commitments on emission reductions to 2030. This change from market priorities towards a sustainable social market approach needs to be steered by both sides of politics. If the bipartisan debate fails, expect a regression to the old issue of electricity prices from ageing coal fired installations to be a key focus at the 2016 elections.

The demarcation between emissions from electricity generation and other major sources of emission is highly appropriate to ensure that special consideration can be given to the impact of electricity charges for households to protect low income families from financial hardship during the implementation of the Safeguard Mechanisms from July 2016.

Whilst public opinion is highly supportive of commitment to stronger action on climate change, this current mood needs to be supported by media campaigns to keep wider community onside when adjustments to established industries interact with prevailing consumer instincts.

COP21 has potentially moved the public debate on climate change in a positive direction and invites a paradigm change towards a consensus-building approach that upholds the wisdom of the sustainable social market over the traditional market approach.

Denis Bright is a registered teacher and a member of the Media, Entertainment and Arts Alliance (MEAA). He has recent postgraduate qualifications in journalism, public policy and international relations. He is interested in developing progressive public policies that are compatible with commitments to a social market model within contemporary globalization.