It’s all over the news. Morrison is finally thinking about maybe allowing the word emissions to be said.

Not that he is going to increase our target or not rely on accounting tricks to meet it, or anything reckless like that. When asked for specific policies, the answer seems to be “technology”.

Only Labor puts jobs and growth at risk, like with their “uncosted, ineffective” 50% renewable energy target for 2030.

As bobbing head Kate Carnell told us, “A 50 per cent RET will put jobs and growth at risk,’’ further stating that modelling showed the existing RET pushed up electricity prices, costing the economy up to $28 billion and a net loss of 5000 jobs.

Yet today, The Australian is reporting that the government “is set to release a draft technology roadmap later this year, [which] lays out an investment blueprint and includes more than 100 new technologies and hopes for at least 50 per cent of energy sources to be renewable by 2030.”

Michaelia Cash screeched her valiant defence of tradies’ utes before the election, but when the government produced their glossy brochure, Climate Solutions Package, we find that they are claiming emissions reduction of “up to 10 million tonnes by 2030” for their as yet to be determined “electric vehicles strategy”.

They make these announcements but they have no plan, as bemoaned by Energy Security Board chairwoman Kerry Schott, who said the lack of national leadership to coordinate the sector is putting electricity security and reliability at risk, adding that the National Energy Guarantee – the plan that cost Turnbull his job – would be a good option.

Aside from the continual flip-flopping and lack of a coherent direction, Morrison’s spinning of the numbers shows this is all still a PR exercise for him rather than any genuine acceptance of the urgency of the problem we are facing.

The Coalition talking points advise all government politicians to parrot-like repeat the phrase “Emissions today are 50 million tonnes less on average each year under our government than under the previous government.”

What he neglects to add is that was thanks to the large drop in emissions under the Labor government. 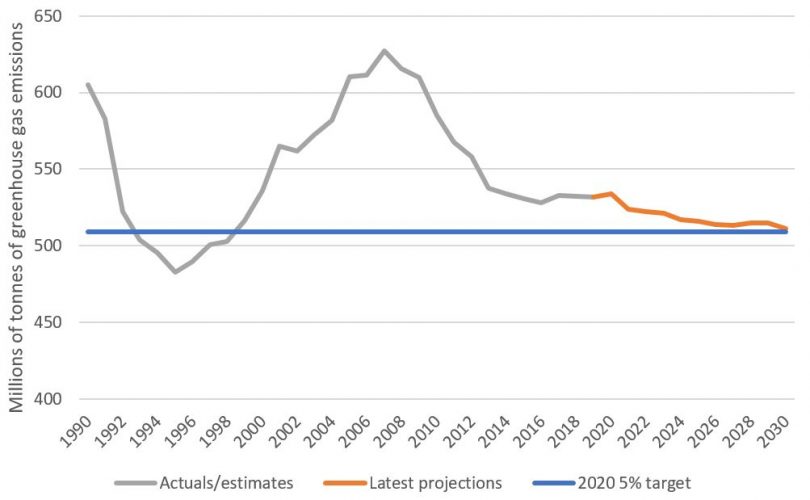 The talking points also insist that the government will “meet and beat” its Kyoto targets.

Would it be too much to ask that we drop the “talking points” crap and actually tell the truth about the current situation so we can make a plan that actually reduces emissions without having to resort to accounting dodges and PR spin designed to make it look like you give a shit?

Enough of the lies!