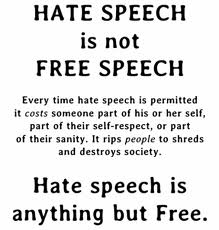 A recent article in The Australian newspaper asserted that Tony Abbott planned to roll back Labor’s laws that limit free speech. It said that if elected, he would work with his attorney-general, George Brandis, to champion, instead of restricting, the right of free speech in Australia. This would involve amending the Racial Discrimination Act, which prohibits remarks that offend others on grounds of race or ethnicity. This was the provision used to prosecute newspaper columnist Andrew Bolt.

Mr Abbott was reported as saying:

So does decency matter?

On the surface, these words may be acceptable to those of a conservative bent, but to people such as myself who like to scratch the surface, they are but a disguise. A permission or dispensation to insult, or assault another’s emotions or even worse.

It is positively unlawful to assault someone physically but perfectly fine to assault them emotionally.

The words of Mr Abbott reminded me of the now famous decision by the US Supreme Court in the Westboro Baptist Church vs. Albert Snyder. Mr Snyder’s son was a marine who died in Iraq. The Church pickets the funerals of servicemen, brandishing the most outrageous signs imaginable and shouting the putrid wrath of God at the families with all the vengeance they can muster.

The court effectively said that it was their duty to protect free speech even if it offended the grieving parents of American heroes. Even if it drove people to the brink of suicide or further. That people should have the right to freedom of expression no matter how evil their intent.

That it didn’t matter how loathing or despising your language was, or what harm your actions caused. You had under the first amendment every right to act in that manner. It’s called free speech.

Now it cannot be overstated just how vile this church is. I call it ‘’The Church of Hate’’ and is very active in many areas of American society. They say the most abominable loathsome things imaginable but the court says its fine and it is there to uphold the church’s right to do so.

There is something wrong with a society that condones hate speech and it is what Tony Abbott and his ilk are wanting for Australia.

“My first thought was, eight justices don’t have the common sense God gave a goat.” He added, “We found out today we can no longer bury our dead in this country with dignity.”

Only those who have been abused by it truly understand what free speech is.

I could rightly, I think, argue that it is impossible to understand the harm unrestrained free speech does to people until we have personally suffered from the abuse of it. I could also argue that we do not appreciate the value of free speech whilst we allow it to be exploited the way it is. I would even suggest that free speech is completely misunderstood.

If as a society our collective intention is the attainment of a better humanity. Then surely hand in glove with that must be our social intercourse. Using this precious gift of free speech to vilify others is not consistent with egalitarian pursuits and a fairer and sophisticated social order.

You can read the court finding in this article:

What it comes down to is what the Australian public wants. Free speech is one of the many gifts that democracy gives us and should be sacrosanct. However, at the same time, the right to use it should carry a heavy individual and collective responsibility. We need to enshrine a greater appreciation of it on our citizens together with an indebtedness of the individual’s entitlement to use it.

I mean by that, that along with the right to use it also comes a requirement on people to display decorum, moderation, fact, balance, reason, tolerance, civility and respect for the other point of view. Free speech does not mean it should be free from ethics. Like truth for example. Sadly, this seems to have been forgotten both here and in the United States.

Of course, the pedlars of verbal violence and dishonesty, the likes of Bolt, Jones, Hadley etc are the most vigorous defenders of free speech because it gives their vitriolic nonsense legitimacy. With the use of free speech, the bigots and hate-mongers seek to influence those in the community who are susceptible or like-minded.

And conservatives support their own particular concept of free speech because it caters for division untruth and above all keeps the proletariat in its place.

The original intent of free speech was to give a voice to the oppressed and to keep governments honest. In the United States, the first amendment is now used as a justification to incite racism, validate hatred and promote both religious and political bigotry.

In the Australian Constitution free speech is only implied. It is time we decided what exactly that means and in doing so, decide how it might shape the sort of society we want to be.

One where free speech is a force for needless destruction or one where it is used for the betterment of society.

Sure it can be vigorous and robust but let’s keep it respectful.