Next time you throw another snag on the Barbie – spare a thought for the fact that if the world stays on its current trajectory of global warming, this generation of Aussies may be the last ones to enjoy this iconic Australian summer ritual.

And it’s not just outdoor summer barbies that are at risk thanks to global inaction on climate change. It’s many other integral parts of our day-to-day lives: enjoying our long hot summers, the Boxing Day Cricket Test, parts of Bondi Beach and the Sydney Opera House. On the current trajectory for global warming – these will soon be gone, gone and let me repeat it in case you missed it the first time – GONE.

This summer, much of Eastern Australia has had just a tiny taste of what the future of Australia looks like due to climate change. At one end of the spectrum – the enormous unfathomable tragedy of the bushfires that have so far burned over 18 million hectares, destroyed over 5,900 buildings, killed over 30 humans and an estimated billion animals. In addition, they have covered much of the southeastern part of Australia with a smoke haze so dense the long term health impacts are yet to be determined.

At the other end of the spectrum, there have been many days when just going outdoors has become hazardous for those living on our Eastern shores due to poor air quality – not to mention the talk around cancelling cricket tests and tennis matches being halted as professional tennis players struggle to breathe.

This speaks nothing of the impact severe fires and unprecedented drought have had on rural towns and communities – some of which have been wiped out altogether. More concerningly, experts say many of these communities should not be rebuilt due to the ongoing risk climate-change now brings to their sustainability.

Wind the clock forward – and if the current trajectory of global warming is NOT stopped, here’s just some of the icons of Australian living that we can expect to lose as the impacts of climate change become more intense:

These are NOT doomsday scenarios – any more than saying that if you put your hand in the fire it will get burned. The scenarios outlined above are just a part of the reality of where we, and the rest of humanity, are taking the globe right now through our inaction on climate change. As David Wallace-Wells recently said:

“The science says climate change threatens nearly every aspect of human life on this planet, and that inaction will hasten the problems”

It doesn’t have to. But right now – despite the LNP’s new favourite three-word slogan promising to “Meet and Beat” carbon emission reduction targets, our policies and those of other major global carbon emitters – are not causing levels of carbon dioxide in the atmosphere to drop. In fact, the opposite is happening: 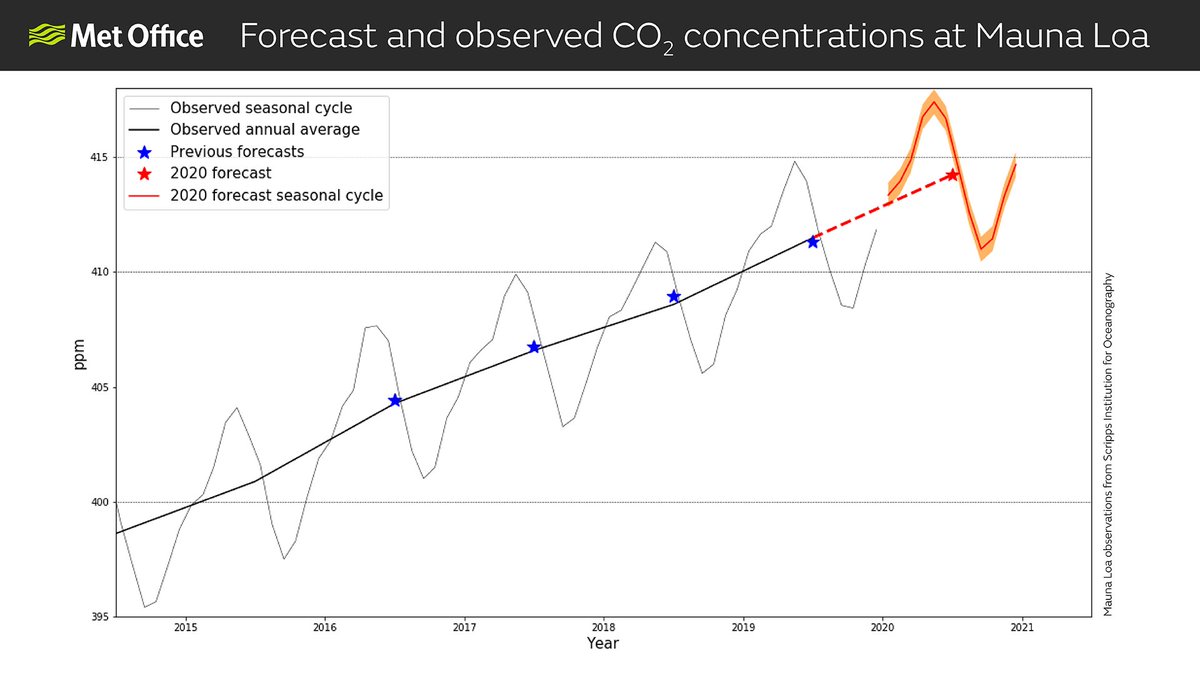 In Australia, our climate has warmed by more than 1-degree celsius since 1910 – and without action, we will continue to warm by as much as 5 degrees celsius by 2090. Five degrees may not sound like all that much in day-to-day weather terms – but in climate terms, it is mammoth. Ice-age mammoth. In fact, there is only a 4 to 7-degree celsius difference between the world we have been living in and the depths of the ice age.

So yes – it will get that bad if we continue to let our politicians do nothing about this. In the words of climate scientist Michael Mann:

You probably already know this – but we can’t just flip a switch and reverse climate change overnight – it takes time.

If we (and future generations) want to continue to enjoy Australia as we know it – we need to take urgent action now. More specifically – according to a review by the UN in 2019, we need to:

Truth doesn’t have sides – it’s not owned by the left or right of politics – it just is. To save much of what we hold dear about Australia we need our politicians to pull together and take real action to stem climate change. Now.

We can’t help drive a global solution to this before we take urgent action ourselves – and by ‘we’ I mean the politicians who represent us.

While Australia isn’t the world’s largest carbon emitter in absolute terms – on a per person basis, we are up there with the worst of them (as illustrated in the image below). 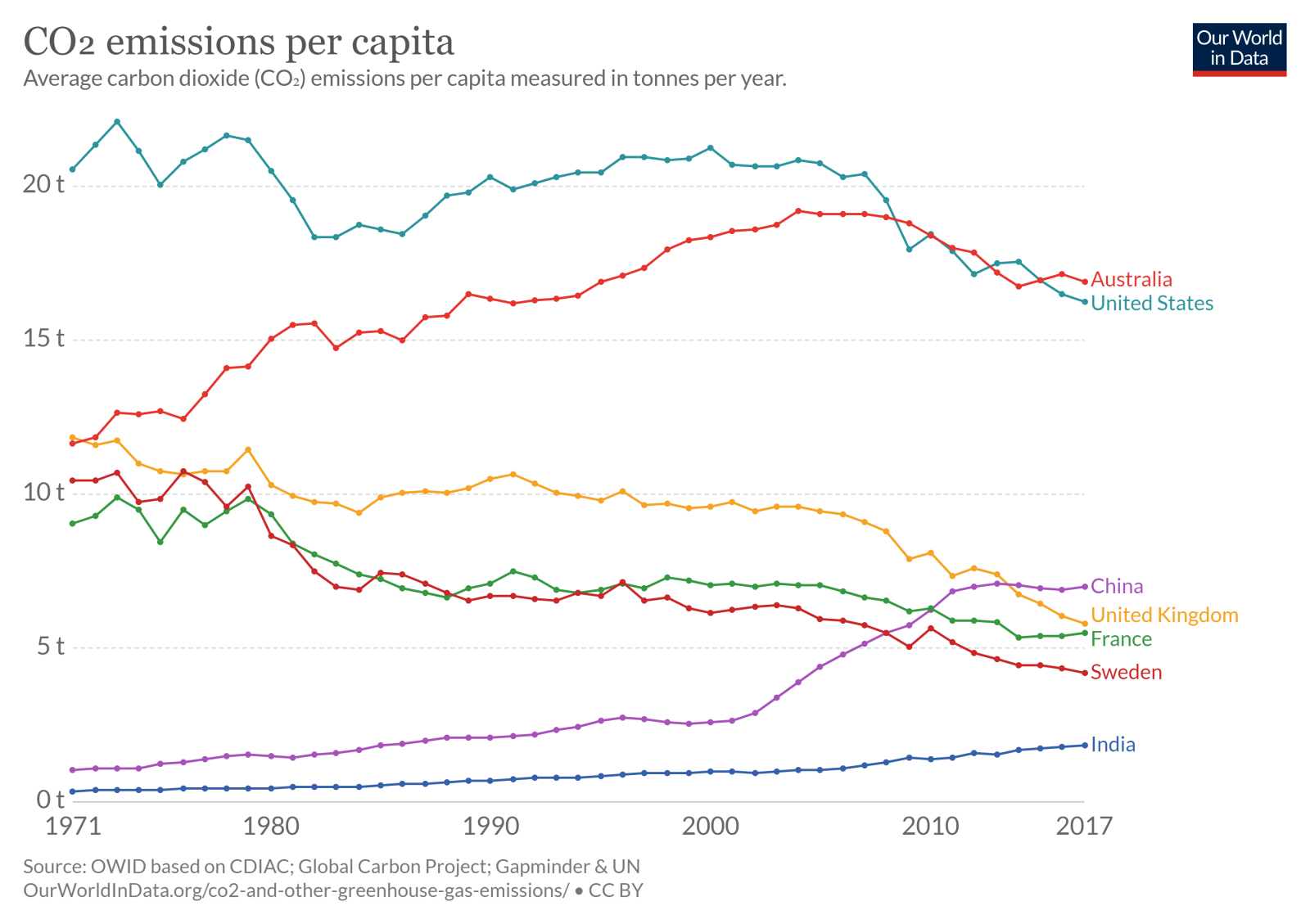 And before we can put pressure on the world’s largest global emitters to change we have to show we are serious ourselves. To quote Simon Holmes a Court:

“We cannot expect global progress if we ourselves aren’t prepared to at least pull our weight, let alone show any leadership.”

If you’re wondering just how far short current LNP policies are of where we need to be – take a look at the graph below. The bar in red on the left is what the government’s own projections show we are actually doing – and the bar in green on the right is what we need to be doing to keep warming at 1.5 degrees celsius. 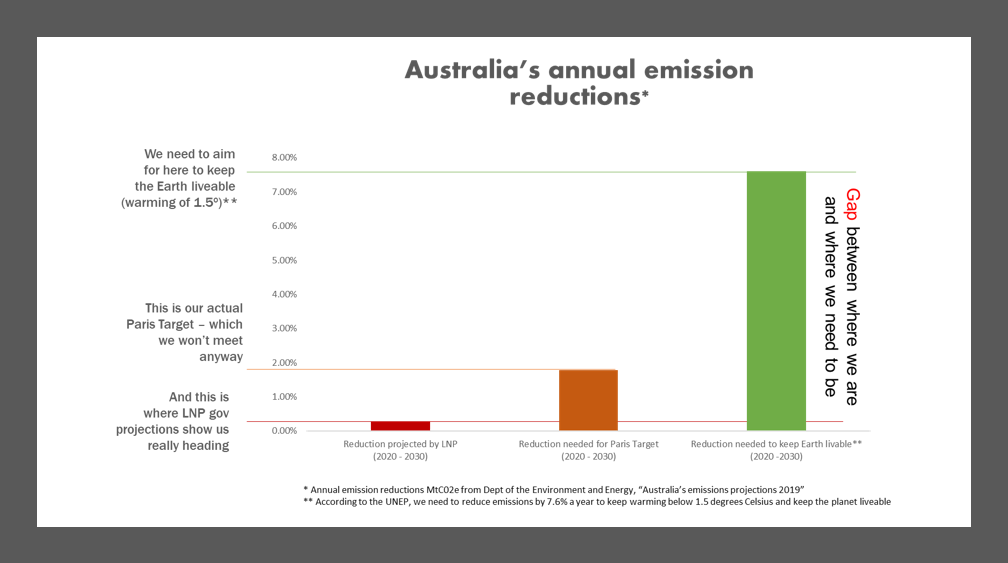 Unfortunately most politicians these days are influenced by one thing and one thing alone – fear of losing their seat. That means our most powerful weapon is public opinion.

If you don’t want facemasks to be the next must-have fashion accessory – #UCAN do something. Demand Urgent Climate Action Now.

The good news is that public opinion is controlled by you, me, and our friends and families. In the words of researcher Dr Rebecca Huntley:

What we need are thousands, millions of everyday conversations about climate change…..We must create a chorus of different communities united in asking, indeed demanding, that we act now to preserve a livable world and a viable future.

So get to it my fellow Aussies – if you want to save the world, or at least our little corner of it – tell your friends and families about this. And get them to tell our pollies they need policies that will bring about Urgent Climate Action Now.

I don’t care what you do – but do your bit to shift public opinion and let our pollies know they have to shift with it. #UCAN do this.

This article was first published on progressiveconversation.com