When the Charter of Budget Honesty was introduced by the Howard/Costello government in 1998 it was intended to provide a framework for the conduct of Government fiscal policy.

“The purpose of the Charter is to improve fiscal policy outcomes. The Charter provides for this by requiring fiscal strategy to be based on principles of sound fiscal management and by facilitating public scrutiny of fiscal policy and performance.”

Broadly speaking, the Charter requires that budgets must be in balance over the course of the economic cycle, which means the government can run a deficit in bad times as long as there’s a surplus in good times. But, as Alan Kohler points out, the problem was it didn’t say how big these should be.

Stephen Anthony of Macroeconomics wrote in a report he did for the Minerals Council of Australia last year:

“Essentially, the fiscal strategy objective (of the Charter) provided the wrong diagnostic tool as a benchmark for success over the business and commodity cycle. As a result, governments spent up big in the boom and got caught on the down side of the cycle. Windfall tax receipts were frittered away.”

According to Macroeconomics, commodity boom windfall revenues contributed around $160 billion to the Commonwealth budget bottom-line up to 2011-12. Yet all that the fiscal strategy required was for the government to run a surplus – of any size.

Because the resources boom led to unexpected returns, there was no danger of being in deficit. Add to this the sale of many assets and there was a motza to play with. The Charter was still adhered to despite a huge spending spree.

The last five budgets of the Howard government contained net discretionary spending of $133 billion and net tax cuts of $117 billion. The structural deficit was set up by John Howard and Peter Costello and not corrected by Kevin Rudd, Julia Gillard and Wayne Swan.

Prior to the 2010 election, Chris Berg of the IPA (and ABC) wrote an article bemoaning the leaking of the then Opposition policy costings.

The Charter allows the opposition to give Treasury its election promises to check the policy costs are correct. If they don’t, the government clobbers them for avoiding scrutiny. Hockey’s figures were subsequently found to have an $11 billion black hole, and the auditors found guilty of professional misconduct. No wonder they didn’t want them released early.

Berg suggested that this part of the charter overwhelmingly favours incumbent governments because they:

“have had three years to consult with Treasury’s nearly 1000 staff about future policies, test policy assumptions, and get Treasury’s recommendations. Much government policy is formulated by Treasury in the first place. By comparison, an opposition is just a few people in a room thinking up ideas.”

From what we have seen of the Abbott government so far, they haven’t expanded their consultative capacity regardless of how many expert public servants are at their disposal and they will sack or ignore anyone who offers advice they don’t want to hear.

In 2004, Ross Gittins wrote ”The government is largely feeding back to the bureaucrats their own costings, whereas the opposition runs a high risk of slipping up somehow and being monstered by the Treasurer.”

To address this problem, in 2012 Labor established the Parliamentary Budget Office.

“The role of the PBO is to inform the Parliament by providing independent and non-partisan analysis of the budget cycle, fiscal policy and the financial implications of proposals.

•Outside the caretaker period for a general election – to prepare policy costings on request by Senators and Members of the House of Representative, with the requests and the PBO’s responses to be kept confidential if so requested by the requestor.

•During the caretaker period for a general election – to prepare costings of publicly announced polices on request by authorised members of Parliamentary parties or independent members.

•To prepare responses (other than policy costings) to requests relating to the budget by Senators or Members of the House of Representatives.

•To prepare submissions to inquiries of Parliamentary committees on request by such committees.

•To conduct research and analysis of the budget and fiscal policy settings.”

One would have thought that the Charter and the PBO would have helped towards keeping the bastards honest but no, both sides still play silly buggers. They are under no compulsion to release costings by a set date and we have been subjected to the debacle of giving interested voters only a day or two to digest the material on many crucial policies. Others, like the NBN or Direct Action, are unable to be costed either due to lack of technical expertise or lack of policy detail. The PPL was based on rubbery assumptions which made the confidence level very low.

And then we have the manipulative approach to reporting that Joe Hockey sells to naïve voters. He pulled some pre-election stunts by using accrual rather than the accepted cash basis. 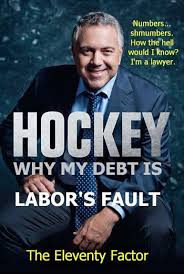 “Mr Hockey today admitted to using the accrual rather than cash bottom line for their numbers – which makes any figures Mr Hockey produces look much rosier than they actually are. The difference between cash and accrual bottom lines across the forward estimates is $16.6 billion. Were Federal Labor to use an accrual bottom line, it would be in surplus a year earlier, in 2015-16. What this means is that Australians will never truly know the state of the budget under an Coalition Government.”

And now, rather than using the independent PEFO as the true state of the inherited debt and forecast for the future, Hockey is using his propaganda sheet MYEFO, which included his revenue and discretionary spending decisions, as the starting point for comparison of how the government is performing fiscally. MYEFO is effectively saying that, under Coalition policies and spending commitments as they stood in December 2013, the gross debt in ten years’ time would be $667 billion. He then somehow sells that as Labor’s fault. I would love to see the same analysis done to the Howard government – what the debt would have been in ten years if his spending continued unabated. Using actual net debt when referring to the Coalition and projected gross debt when talking about Labor is blatantly designed to misinform.

It was interesting to read in the recent Commission of Audit that they recommend the transparency and rules about fiscal statements need to be tightened up.

Improved budget reporting requirements would improve transparency and accountability and assist the government in achieving its medium‑term fiscal strategy.”

They also take a veiled shot at Hockey’s forecasts and express their confidence in Treasury figures.

“Recent budget documents have reported large downward revisions to the economic and revenue forecasts. Against this backdrop, a number of concerns have been raised about the transparency of current forecasting arrangements.

The Review of Treasury Macroeconomic and Revenue Forecasting (Australian Government, 2012) found that ‘Treasury’s forecasts are comparable with, or better than, those of official agencies overseas’.”

The report goes on to recommend some changes.

Another option which improves transparency about how the Budget forecasts compare with the views of other forecasters could be achieved by requiring comparisons to be published between key economic forecasts and relevant consensus forecasts.

Confidence intervals could also be published for key forecasts.”

All I can say is good luck with that!

I am expecting General Jim Molan (retired) to be brought out of mothballs (if anyone can find him since he was given $1 million to be our ‘Special Envoy’ smashing the people smuggling business) and given Martin Parkinson’s job at Treasury. Launch Operation Bamboozle where, in the national interest, they will no longer be giving the financial bandits a regular update on fiscal matters.

“The repair job started from day one obviously with the election of the new government but it accelerates from today given that we will see the full extent of Labor’s debt and deficit disaster.” – Tony Abbott, December 2013

MATHIAS CORMANN: “Labor left behind a debt and deficit disaster after completely mismanaging public money over six years in government. We are taking responsibility to fixing up the mess they left behind.” July 16 2014