In May 2013, Wayne Swan estimated revenues for the 2014-15 financial year of $401 billion; this was two years in advance. In May 2014, Joe Hockey projected revenues of $385 billion for the same period one year in advance.

Just six months later, in December 2014, Hockey downgraded his original estimate to $374 billion. On this revised figure, Wayne Swan’s projection was out by about 7%, while Hockey’s was out by 3%.

While both men were taking advice from the same people within the Treasury department, each had their own input and their own ideological preferences. So whose projection was the more accurate? Taking the time factor and more recent information available to Hockey into account, Wayne Swan was more accurate.

Welcome to the world of revenue estimates. It’s an inexact science full of unknowns and Joe Hockey is now learning that the hard way. While we might be tempted to go soft on him, we all remember his heartless demeanor as shadow treasurer, one that was excessively critical of Wayne Swan as he conveniently ignored the difficulties Swan faced at the time.

Now, it is Hockey’s turn to receive some criticism. Hockey is a man all at sea. He really doesn’t know what to do. His body English gives him away. His Neo-liberal ideology has no answer to address how he should approach this difficult task. He says his budget will act as a shock absorber to protect the Australian economy, but he doesn’t say how. Whoever wrote that line for him, incidentally, should consider a career change.

For Hockey’s benefit and Cormann’s too, there is only one way to protect the Australian economy and that is by deficit spending and lots of it. If either man is going to ‘fix the budget’ they will have to do what Labor did and spend up big. This is both men’s ‘Caesar at the Rubicon’ moment. 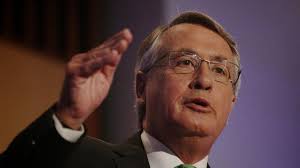 It’s no good trying to take a swipe at Wayne Swan for his earlier projections. These men should take a good look at their own. All the debt hysteria that Hockey whipped up prior to last year’s election is coming back to bite him. How well we remember the debt truck travelling around the country creating fear and uncertainty in the minds of those who don’t understand how a government funds its spending. Well, now it appears, he doesn’t either.

Back in December 2013, after the release of his first and quite dishonest MYEFO, I wrote an article telling Tony Abbott what he had to look forward to:

“In 2016 he will likely have to account for 6.5-7% unemployment, a lack-lustre private sector, a serious Terms of Trade deficit, a national debt of around $600 billion, no surplus in sight and a less than encouraging world economic outlook. The numbers will bury him. And in addition to all of this, we still don’t know what we don’t know.”

I should have addressed it to Joe Hockey. It wasn’t difficult for me to see what was coming. It should not have been difficult for him.

To produce a healthy budget you must have a fully engaged workforce maximising the production of goods and services. Ideally, this should be achieved by the private sector but when they are sluggish, as they are now, government must take up the slack and inject money into the economy; lots of it, targeted at producing goods that we, and the rest of the world want. It is deficit spending but it is not debt.

Their failure to understand this is Hockey’s and the government’s problem. Because they are hypnotised by neo-liberal economic ideology, they can’t see it. When Hockey says the budget will act as a shock absorber, he doesn’t really know what that means. If he did, he would follow it up by announcing a stimulus package to get the 1.8 million Australians currently unemployed and underemployed back to work. That’s a shock absorber. 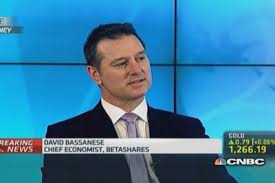 BetaShares chief economist David Bassanese says a perception that Australia’s longer-term budget problems are due to falling commodity prices is misguided. Mr Bassanese said that he estimates half of the $40 billion deficit this year is caused by unemployment being higher than normal – currently at 6.3 per cent, and forecast by this month’s MYEFO to hit 6.5 per cent.

He’s right. The underutilisation of the workforce is the big drag on the economy. Mr Bassanese argues that a gradual fall in unemployment and the revenue boost from income tax bracket creep are the key elements to tackle if the Government is to return to surplus.

The reality though, is that surpluses are not good for the economy anyway. They suck money out of the system, money that could be contributing to growth. Deficit spending injects money into the system, creates employment, creates demand, increases production, increases taxation revenues and growth. It’s not that hard to grasp.

If Joe Hockey and Mathias Cormann can’t see that and continue to cut spending they will only aggravate an economy already on a knife edge. ren’t so blindsided by the excessively wealthy to whom they owe their election victory, they would see that instead of attacking the less well off, they could have their surplus simply by abolishing tax concessions for superannuation and employer contributions, which would save them $36 billion this financial year and nearly $50 billion by 2017-18.

It is that easy.