Tony Abbott’s recent comments comparing himself with Ronald Reagan, Margaret Thatcher and John Howard prompt some interesting afterthoughts. Without commenting on either Reagan or Thatcher’s credentials, they are still strange bedfellows with whom he chooses to be associated.

Firstly, to have the gall to compare himself in any context with either Thatcher or Reagan is a grossly conceited act and not just ignores the political climate for both leaders at the time, but fails to see the vastly different economic world we live in today. And trying to claim some comparison with John Howard sounds like a vain attempt to restore some of his own crumbling reputation by association.

Neither of these pathetic efforts will work, even with the most rusted-on Liberal supporters. They may still plan to vote for him, but I can’t see them doing it with any conviction. Abbott has also forgotten how John Howard fared in the1998 election that so nearly made him a one term prime minister. 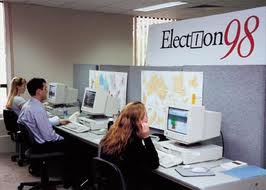 In that election Labor gained an additional 18 seats and fell short by just 6 seats of winning even though they won 51.54% of the two part preferred vote. The 2016 election will be more difficult for the LNP. The electoral boundaries will not be as kind to Abbott as they were to Howard.

If the LNP lose just 15 seats they will lose their majority and the independents will have the balance of power. Assuming the 5 independents are returned (unlikely as that is), it is hard to see all of them aligning themselves with the LNP. However, if Labor win 21 seats they will win government in their own right; not a huge ask if the present polls are any indication.

Upcoming state elections due in Queensland and New South Wales will doubtless restore the balance for Labor in both states after their previous disastrous results, even if they don’t win. This will place additional pressure on Abbott and will likely result in him making more mistakes, more gaffes, more blunders.

But even before that, Abbott needs to take a closer look at what the Howard government achieved after they scraped home in 1998. As economic managers their record is not very flattering.

They sold off highly profitable and productive assets including, Telstra, our remaining share of the Commonwealth Bank, Melbourne, Brisbane and Perth Airports and Dasfleet together with a litany of others. They ignored glaring infrastructure projects that could have been financed with the windfall of money pouring in from the mining boom.

They chose not to increase compulsory superannuation contributions at a time when salaries were going through the roof. They sold off 167 tonnes of our gold reserves at ridiculously low prices compared with what happened subsequently.

Between 1997 and 2002 they lost $4.5 billion gambling on foreign exchange markets. They squandered vast amounts of revenue that could have been used for projects that contributed to growth (GDP) and spent it buying votes with middle class welfare handouts that no one needed.

Peter Hartcher wrote in the Sydney Morning Herald in March 2009, “The big picture of Howard fiscal policy was much worse. As the Treasury reported last year, from the 2004-05 budget to the 2007 election the China boom and a robust economy added $334 billion in windfall gains to the budget surplus. Of this, the Howard government spent, or gave away in tax cuts, $314 billion, or 94 per cent.”

Another comprehensive article on the fiscally irresponsible behaviour of the Howard government can be found here. Yet despite this damning evidence, the general population still believes those wasted years represented good financial management. And, even today they rate the LNP as better financial managers.

If this is what Tony Abbott wants to be compared with, a government where he and Joe Hockey were ministerial members, he has overlooked one crucial factor.

Abbott and Hockey do not have a truckload of money to waste. They are in the opposite position to John Howard and Peter Costello.

It’s only going to get worse from here and compared with Howard, Thatcher and Reagan, he and his treasurer are out of their league and dropping further behind each day.