Now I know that many of you will have heard of Maslow’s Hierarchy of Need, but for those who’ve never seen it, it looks something like this: 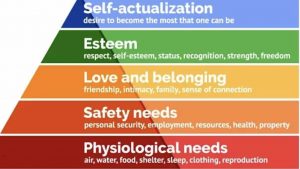 The basic idea is that one needs to meet the needs at the bottom before one aspires to the needs at the top. In order to demonstrate this, I’ll use a fictitious account of a young, homeless woman called Grace.

Grace is on the street and hungry when a man approaches her and tells her that he has a spare room and food and he hates to see anyone like this. While Grace is suspicious of his motives, sleeping rough isn’t safe either so she goes back to his house where she is fed and shown a room where she can sleep. With most of her physiological needs met, she barricades the door to make herself feel safe and gets some sleep.

After a few days, she comes to accept that the man has no ulterior motive and that she can come and go as she pleases and he is no threat to her. He gives her jobs to do so that she doesn’t feel like she’s relying on his charity. However, she feels no sense of belonging.

One day, on the way to the grocery store, she sees a guy rummaging through the bin looking for food. She approaches him and offers him some money so that he can buy food. He stands and looks her in the eye. He is strikingly good-looking. He tells her that his name is Pedro and that he has no need of her money because it perpetuates a capitalist system which is destroying the planet and that he prefers to scrounge for the wasted food and to live in the streets because that places less pressure on the planet.

Ok, I could go on for several pages with the love story that develops and how Grace is attracted to Pedro and all her dilemmas about whether she can leave her comfortable room to fulfil the next rung of needs: Love and Belonging. And how her decision to turn her back on the charity of the other man gives her Self-Esteem and that she rises above her need for food and shelter.

However, I’m not going to do that for three reasons: 1. I’d just be writing another sexist story about how a woman keeps getting saved by men. 2. It doesn’t fit with Maslow’s concept and 3. This is really more about elections and the story is just a vehicle for a lot of silly stereotypes that are so prevalent in the media.

And this brings me quite neatly to the problem with how polls are used, viewed, analysed, and in the end quite meaningless unless we get to vote on things much more frequently. In the end, people are most focused on their immediate needs so they’ll vote for the party that appeals to their needs at the lower end of the hierarchy. This is why a fear campaign works well at times. And a party can scoop up some votes with the next step on the hierarchy with a sense of Love and Belonging. “As Australians…”

Before one allows something as important as battling climate change to affect one’s vote, one usually has to be high up on the hierarchy of needs. Consequently, Joel Fitzgibbon is appealing to those in his electorate who feel their jobs are threatened by any action, even though inaction won’t save their jobs in the long term.

When we start to look at the next election in terms of Grace, we can clearly see that it’s not that she objects to Pedro’s ideas about helping save the planet; it’s just that her more immediate needs are being met by the man who took her in. And so it is with the current Coalition government: they’ve taken a lot of people in.

But when looking forward to the next election, the question needs to be asked, does the electorate feel a strong sense of loyalty and gratitude to Scott Morrison and his merry men, or does it – like Grace – just feel that they’re better than sleeping on the streets. While the electorate may not embrace the extreme Pedro, it’s not because they don’t want to help save the planet. It’s just that they don’t want to put their own needs at risk. And any political party that can make them feel like it’s not threatening those needs can make the electorate aspire to feeling self-esteem and to do their bit for the world.

This is not just true of climate change. There are a whole range of issues where the polls tell us that the electorate would be behind a whole range of changes – take the marriage equality vote as an example – but we’re made to view them as risky by those opposing the particular change. In the case of renewable energy, we used to be told that people were against it because it was more expensive. Now that the costs are down, we’re told that it’s because it doesn’t deliver “base-load power” when the sun doesn’t blow and the wind doesn’t shine, or whatever that slogan is. What happens when batteries make that argument irrelevant? Well, I can just hear the PM telling us: “Isn’t it worth paying a few cents more for your power to keep coal-miners employed?”

Snigger at that if you think I’m being ridiculous, but remember that this is the government that had Dan Tehan tell us that the vaccine rollout “wasn’t a race”. Why not? Well, because the Melbourne Cup is a race, so…