Villains often have the best tunes. In some cases, they also have the best evidence. The tendency in the latter is to suppress or distort that evidence if it is contrary to their interests. Exxon, now ExxonMobil, the world’s largest oil and gas company, has revealed, much like tobacco companies of the past, that excellent research that might prove costly to profits is best suppressed. Destroying ecological systems and ravaging mother nature are secondary considerations.

In the 1970s, it was already engaged in research of farsighted worth. As a co-authored study published this month in Science shows, the scientists in the employ of Exxon between 1977 and 2003 correctly predicted the rate of temperature rises as a result of carbon emissions, accurately predicted that anthropogenic global warming would be detectable by 2000 (within a 5 year margin) and even went so far as to throw in reasonable estimates as to how much carbon dioxide would lead to dangerous levels of warming.

In 2015, internal documents revealed that the company was already chewing over the issue of climate change in the latter part of the 1970s. In July 1977, senior scientist James Black stated that there was “general scientific agreement that the most likely manner in which mankind is influencing the global climate is through carbon dioxide release from burning of fossil fuels.” What followed was ominous. The current state of thinking held “that man has a time window of five to 10 years before the need for hard decisions regarding changes in energy strategies might become critical.”

The documents also showed that, between the 1970s and 1980s, scientists were brought in to participate in a research program that empirically sampled carbon dioxide and modelled climate change impacts. Exxon even went so far as to fork out $1 million on a tanker project to assess the absorption rates of carbon dioxide in oceans.

At the time of these revelations, the company, now ExxonMobil, unleashed its public relations battalions to douse the fires. “We didn’t reach those conclusions, nor did we try to bury it like they [the investigators of InsideClimate News] suggest,” complained ExxonMobil spokesperson Allan Jeffers to Scientific American. “The thing that shocks me most is that we’ve been saying this for years, and that we have been involved in climate research.” Shocking indeed.

Jeffers went on to blame those cheeky investigators for going down and pulling “some documents that we made available publicly in the archives and portray them as some kind of bombshell whistle-blower exposé because of the loaded language and selective use of materials.” The insinuation here: the company was being punished for its transparency and hounded by those nasty cherry-picking greenies and gossips.

ExxonMobil can hardly dispute the latest assessment of its quantitative climate change projections by Geoffrey Supran of Harvard University, along with his colleagues. Supran and his co-authors, on examining the documents, found that accuracy, in terms of predicting rates of global warming, was in the order of 63 to 83 per cent. They even go so far as to regard such predictions as skilful.

As Supran describes it, the projections were so accurate they proved “consistent with subsequent observations” and on par with independent models. Admiration is expressed for the scientific fraternity. “Excellent scientists modelled and predicted global warming with shocking skill and accuracy, only for the company to spend the next couple of decades denying that very climate science.” Supran is silent on the moral culpability for those same scientists who continued to benefit from the employ of the company, raking in benefits yet publicly muzzled. 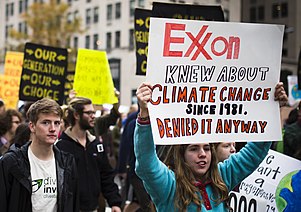 Parallel universes thereby functioned in the laboratory and in the company boardroom. The lab results were troubling, even disconcerting, though Supran is overly generous in suggesting that those working there “contributed quietly to climate science.” The boardroom grew increasingly belligerent in denying the broader implications of the research. All were compromised.

The public face of the endeavour was typified by a strategy that simultaneously spoke about positive efforts being made to mitigate climate change effects while claiming that the science on the issue was not settled. In April 2000, Exxon published a number of Op Eds across the United States with such titles as “Do No Harm”, “Unsettled Science”, “The Promise of Technology” and “The Path Forward on Climate Change.”

In his introduction to a booklet outlining the pieces, then CEO and Chairman Lee R. Raymond sums up the hedging mood. “As you will read, we believe that climate change may pose a legitimate long-term risk and that much more needs to be learned about it. We believe that enough is known to address climate change through responsible actions now, but not enough to impose unworkable short-term agreements like the Kyoto Protocol, which would adversely affect the well being of people everywhere in the world.”

The following year, an ExxonMobil press release pursued the lack of consensus theme, suggesting that “during the 1970’s [sic], people were concerned about global cooling.” In 2003, US Senator James Inhofe revealed the influence of the fossil fuel lobby – he had received to date $2.3 million in campaign contributions, including from ExxonMobil – by parroting the idea that the science on anthropogenic global warming was “far from settled”.

Now, as in 2015, ExxonMobil’s response is nothing but disingenuous. “Those who suggest ‘we knew’ are wrong,” yet another spokesperson claimed in a statement. “Some have sought to misrepresent facts and ExxonMobil’s position on climate science, and its support for effective policy solutions, by recasting well intended, internal policy debates as an attempted company disinformation campaign.”

The denial flies in the face of knowledge across the entire fossil fuel industry, including other companies such as electric utilities and the motor companies GM and Ford. The approach there is sly and dissimulating. Our scientists told us one thing, but our communications team prefers to tell you something else.

What Supran and his colleagues have shown us is that the very companies responsible for carbon emissions can be hoisted by their own petard. As they put it, “bringing quantitative techniques from the physical sciences to bear on a discipline traditionally dominated by qualitative journalistic and historical approaches offers one path to remedying this blind spot [regarding climate lobbying and propaganda by fossil fuel interests].” Ignorance was never a good defence, but it has now been entirely scuppered.