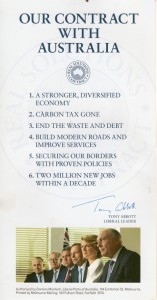 Last week, while acting as goal umpire, I signalled a goal to our team. Although it came out of a pack, I had a clear view of the ball leaving the player’s foot and going through the goal. The opposition started screaming that it was touched. I was tempted to ask which of them thought touched it given they were all about a metre away from the ball, but instead simply signalled the goal. (In such decisions, the field umpire will call “Touched, all clear” if he heard or saw anything – he didn’t.)

As the ball was going back to the centre an opposition supporter called out that I was a cheat and that I knew the ball was touched. Clearly, he had a clear unbiased, unimpeded view from thirty metres away, and knew that I must be cheating. His attitude reminded me of the various times I’ve been attacked a “left-wing moorun” or “Labour party supporter”. Logic has nothing to do with the argument. For many, it’s simply: I disagree with you, therefore you’re biased and unable to see this clearly because you’re an idiot, and even though I can’t spell, this doesn’t detract from the fact that I am always right about absolutely everything.

I try to make sure that I don’t fall into the same trap. Perhaps, Andrew Bolt really does have a point when he says that it’s not white people who are racist, it’s Asians and those people with non-white skin that he’s not allowed vilify any more because the law prevents free speech. So, in order to be fair and balanced, I thought I’d just examine the way that both parties approach the future.

On balance, you’d have to say that the Liberals have a clearer idea of what they want the future to look like.

P.S. I know that some rabid Liberal supporter will accuse me of deliberating ignoring the Budget deficit, but I feel that it’s been well covered in so many other areas. And yes, it is true that while Labor weren’t likely to return the Budget to surplus before 2017, the Liberals promise that they’ll do it within ten years. They also promised that they’d deliver Budget surpluses in their first term.