If you were on a fast moving train and someone came through the carriage and told you that the train had no brakes and only a brick wall would stop it, how would you feel? What would you do?

Right now, Australians are heading at full speed into an economic brick wall and the government won’t do what’s needed to stop it.

We boarded the train in the late 90s and early 2000s when mining was the buzz word and Peter Costello started producing surplus budgets. Everyone gave him a big pat on the back and told him what a great job he was doing.

Peter probably felt justifiably proud and continued doing what he thought was the right thing, i.e. producing more surplus budgets. Mind you, he was receiving shiploads of money from the mining sector, so it wasn’t all that difficult.

Unfortunately, only a select few at the time realised that Peter’s surpluses were sucking money out of the economy. He thought he was deploying it to pay down the Hawke/Keating government debt, which had grown to 18.1% of GDP by 1996.

But in doing that actually, he was forcing the private sector (you, me and the corporates), to replace that debt reduction with debt of our own using the credit card, the mortgage and corporate loans. The train had pulled out of the station. 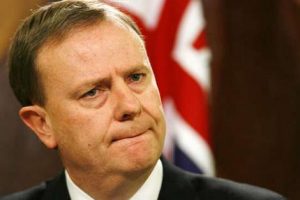 Nobody played much attention to that though. Everyone thought Peter was a genius and by 2007, he had paid down all net debt although, in gross terms, $58 billion of government debt remained.

All the while he was doing that, Newton’s Third Law of Motion was kicking in and private debt was on the rise.

Then, those nasty Labor people were elected once more. Just 12 months later the greatest economic upheaval since the 1930s depression exploded in our faces.

Banks collapsed along with the stock market and property values. Demand fell sharply as unemployment soared into the tens of millions across the OECD world.

A brief period of stimulus in Australia proved to be a masterstroke. Labor’s economic management was hailed worldwide. Yet internal bickering became its undoing despite maintaining the nation’s unique record of continuous economic growth.

By this stage, however, private debt had reached record levels as Australians continued leveraging up on inflated housing prices, buying up anything and everything they could get on their credit cards.

By September 2013, Government gross debt was a miserable $278 billion, just 25% of GDP. The new conservative Coalition government won office through a compliant media who convinced people that Labor’s debt would send us broke. Austerity was the new buzz word.

The new government promised a return to surplus budgets. Despite a fall in demand, rising unemployment and low wage growth, the government assured us they were on the right path.

More than six years later, none of their promises have produced the slightest indication of improvement. Unemployment, low wage growth crippled by a continued fall in demand is sending our fast moving train closer and closer to that brick wall.

The national government debt has skyrocketed to $465 billion, something the Coalition once thought would send us broke and our debt to GDP ratio has risen to above 36%.

The first negative quarter of growth (September -0.5%) was unexpected. The next quarter (December 2016) won’t be known until March 2017 and all the economists are saying it will bounce back to positive territory. That is Bollocks!

The train won’t slow down just because they say so. By March it will already be obvious to the private sector that demand has not improved. They will begin laying off people in February and Australia will be in recession.

Even if the March quarter produced a small albeit unlikely amount of growth (say, 0.2%), the 12 month figure will still show growth at a miserable 1.7% for the year 2016.

None of this needs to happen. The economy is tanking. It is being starved of money that should be coming from the government, that doesn’t need to be borrowed, that should be spent on nation building infrastructure projects, on interim stimulus injections and a job guarantee. 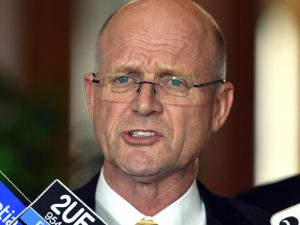 Yet what do we hear and read about daily via the media? The Health Minister, Sussan Ley tells us she didn’t plan on spending nearly $800,000 on a Gold Coast apartment while on an official trip paid by the government, Senator David Leyonhjelm scolds pensioners for being pensioners and now Centrelink, using a suspect algorithm, is advising people traumatised by demands for the reimbursement of welfare payments, to call Lifeline.

That train crash is getting closer and closer. What will the media say when it happens?