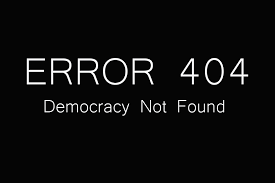 I have said it before but it deserves repeating. Democracy is not failing us; it is we who fail democracy when we fail to actively engage with it. Democracy, as we practice it today, has lost its essential direction and has been usurped by divisive, vitriolic, jingoistic spin. Democracy today is no longer government of, by and for the people. It is government of the most influential, the loudest shock jock, the focus group, the public relations consultant and whoever else is able to exercise their lust for power. This dysfunctional gathering ignores concern for national unity and prosperity. The voice of the special interest group has come to dominate the present model. Debate, divide and conquer is the aim and its tactic is to fragment the collective energy of the nation, split it down the middle, weaken its resolve and make it easier for vested interests to have their way. Unity is strength. Disunity is a recipe for failure.

The system we call democracy, the one devised by ourselves for ourselves, has been hi-jacked. It has been compromised by the wealthy for the benefit of the wealthy. The collective interest of the masses has been relegated to second place and has become a by-product. The ideology of conservative politics is to strengthen power within a subset of the privileged; those who have the means to exploit and develop resources. The people who own the resources are relegated to mere observers and see little of the benefits that result.

I am reminded of these basic tenets of democratic idealism when I observe the lack of them with the present government; how they go about their highly orchestrated routine of daily spin doctoring. Dressing up documents with headings like ‘Labor’s Mess’ is not just poor politics. It tells us how uncertain they are about their own legitimacy. They are reminding us of how they got there. It says they didn’t get there on their merits; they campaigned on negative values, on what was bad about the other side, not what was good about them. They couldn’t say what was good about them because they don’t know. They don’t think of such things. They have an uncompromising agenda, devoid of social morality and will favour those who support that agenda without consideration of the social implications. That agenda is essentially about wealth creation; developing, embracing, supporting and rewarding wealth creation. When successful and productive it has flow-on effects that benefit the greater population through employment, education and health, all of which benefits the nation as a whole. Conservative governments love that agenda. Their failing is that they place that agenda ahead of social responsibilities. And when things go pear-shaped it is the rest of the population who suffer, who bear the brunt of mistakes made by those whose only interest is wealth creation. This is not how democracy was meant to work.

How do we reinvent democracy? How do we wind it back to the way it was practiced in the past, when the voice of the people determined the future direction of the country. When we engage in collective discussion we are more intelligent than we think. When we argue for collective interest over special interest we strengthen the whole. Discussion panels need to replace focus groups. Councils for public interest should replace lobbyists. But I’m not holding my breath. The people will decide this government’s future, but it is likely they will not be able to see through this agenda, this ideologically flawed goal of wealth creation above all else. They will, more likely, be blinded by spin and deceit. And that means Labor, in opposition, will need to sharpen their communication skills and find more creative ways to deliver their message.

It remains to be seen if they can convince sufficient numbers of voters in at least 21 seats around the country to change their vote. It remains to be seen if such skills, properly developed, will prevail. A recent survey of 15000 people in Canada concluded that “people with low intelligence gravitate towards right-wing views because they make them feel safe.”
The study also concluded that, “Individuals with lower cognitive abilities may gravitate towards more socially conservative right-wing ideologies that maintain the status quo.”
This apparent connection between conservative voters and lower cognitive abilities should not surprise anyone. It is what has enabled conservative governments to win power for decades.

But dealing with, and overcoming, that anomaly is the challenge for Labor. That is what it will take to remove this deceitful and ideologically paralysed government from office in 2016. One thing is clear: this government should be removed. They are only interested in governing for their masters; the privileged, the wealthy and the powerful. They achieve that end by deceit, by carefully concealing their true intentions and by the constant repetition of three word slogans which they know appeal to the ignorant and the less intelligent.

But this isn’t how democracy is supposed to work.