On October 12 2016 Andrew Bolt wrote these words for the Herald Sun. Notwithstanding the austerity of his thinking, I took umbrage at the implication, or suppositions he was making.

Take this for example:

”As for Obama, he proved even the totally unqualified could now become president if he represented the right victim group in this whining age of victimhood”.

Firstly he is implying that Obama was totally unqualified to become President. He does so without backing his opinion with substantive evidence. But it is the second implication that intrigues me or better still maddens me.

In typical Bolt fashion he clouds his opinion in the hue of racism, or at least leaves it open for the reader to interpret it so. Clearly to me he is suggesting that Obama belongs to a minority black cohort who are continually whining. Again without attaching any evidence.

There is not a mention of the proven fact that there was a Republican plot to obstruct President Obama before he even took office.

”If he was for it,” former Ohio Senator George Voinovich explained, ”we had to be against it”.

And so it went for 8 years. Republicans hated him with a vengeance. He only ever controlled both houses for a short period of 6 months. In spite of that he has done much good work for his country.

In office he has presented a calm dignity and unflappable demeanour that should be written about and copied by other leaders.

But back to Bolt

Firstly, it must be said that Andrew is a convicted racist and has been found to on many occasions lie in his writing, particularly on the environment. In addition he has been convicted of defaming a female magistrate. He wants the law changed so that in the future under the guise of free speech he will be able to vilify at his heart’s content. Indeed, the question needs to be asked ”what does he want to say that he can’t say now”

I have no doubt that he is paid extraordinary amounts of money to proliferate the pages of the Herald Sun with this sort of gutter journalism. Let us not forget what Justice Bromberg, said about Bolt’s use of language.

”His style and structure is highly suggestive and designed to excite. His style was ”not careful, precise or exact” and the language not moderate or temperate but often strong and emphatic”.

”There is a liberal use of sarcasm and mockery”.

”Language of that kind that has a heightened capacity to convey implications beyond the literal meaning of the words utilised. It is language, which invites the reader to not only read the lines, but to also read between the lines”.

We should also remember whilst we are on the subject of racism that during the London riots, of the not too distant past Bolt in one of his pieces used the word ”aped” to describe the copycat behaviour of some people. The use of the word was legitimate in that sense until you appreciate that he was talking about black West Indians, and then the word became racist. And there we have the clouded hue of racism again. Bolt went on to say that.

”But surely some of Trump’s beaten Republican rivals were better. Marco Rubio is a tyro talent and Ted Cruz deeply informed on foreign affairs”. 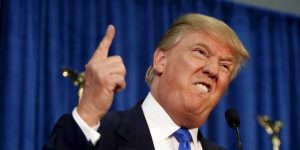 He is like a modernist artist who asks you to interpret a painting so that it doesn’t matter what you think the artist will always be right. Art lovers will know what I mean by that.

Here are links to both candidates’ policies. You work it out.

Another headline that took my attention this week was this illuminating one of Tony Abbott’s opinion of Donald Trump. Surely it’s a headline no one would want to own.

”Some countries make a habit of institutionalising mediocre minds”

When I read the article it occurred to me that whilst Abbott was critical of Trump’s behaviour with women, that Abbott himself, in this area, was not exactly Lilly white. And while the rest of the world, and politicians of all persuasions are outraged by Trumps policies and scandalous conduct, here we have the former Prime Minister of Australia more or less agreeing with the general thrust of his beliefs.

Remember these from Abbott’s past.

1 He referred to a woman Chairperson as ”Chairthing”.

2 He was accused of assaulting a woman at University, and was later acquitted. He was defended by a QC and the girl defended herself.

3 Another woman accuses him of throwing punches at her. And hitting either side of a wall she was standing against. He says it never happened but others corroborate her story.

And these views on women.

”The problem with the Australian practice of abortion is that an objectively grave matter has been reduced to a question of the mother’s convenience”.

”I think it would be folly to expect that women will ever dominate or even approach equal representation in a large number of areas simply because their aptitudes, abilities and interests are different for physiological reasons”.

”What the housewives of Australia need to understand as they do the ironing is that if they get it done commercially it’s going to go up in price and their own power bills when they switch the iron on are going to go up, every year”.

”Be as humane as you possibly can”.

Why any politician would want to draw attention to oneself via an interview about Donald Trump beggars belief but we live in strange political times. And the three aforementioned can also described as a strange political animals.