Yesterday I watched Bill Shorten’s address on the McKell Institute’s Report ‘Choosing Opportunity’ where he spoke passionately about equality and a fair go. However, to achieve real opportunity, the first thing we must acknowledge is that stigma and discrimination are not conducive to equal opportunity.

Income Management, Cashless Welfare and Basics Card all have the same aim. The aim is a paternalistic approach of a ‘guiding hand’ to set those unfortunate enough not to have a job on the path to ‘wholeness.’

The aim of income management is to enforce a patronising approach which places the burden of shame and stigma on the unemployed, because the Government cannot be bothered to engage in job creation; because oh! that’s right, “the market will sort it all out.” Bullocks!

The aim of income management is to inconvenience, stigmatise, and label the unemployed as ‘others’ who are not part of the ‘normals’ in society.

The aim of income management is to conduct surveillance of the unemployed (Dee, 2013).

The aim is to extend a measure that was originally aimed at reducing alcohol abuse and child abuse in remote communities and now has extended to so many. The current and previous Governments have placed control measures on those who do not need controlling. That is not the “Fair Go” Australians long to return to.

With the NT having more than four times the number of all the other income management sites combined, it really begs the question if this measure is indeed racist and the extension of this measure is to appear ‘not racist!’

The McKell Institute explains three types of welfare models in their report:

“The study identified three main forms of welfare state: the ‘liberal welfare regime,’ which emphasised market efficiencies and demonstrated limited government interventions; the ‘corporatist regime’ which is committed to preserving the traditional family, and invest in social insurance programs that encourage motherhood and provide benefits that encourage mothers to return to work; and finally the ‘social democrat’ model which pursues equality.“

If the underpinning construct of Bill Shorten’s speech and the McKell Institute’s report is equality; then income management simply must be high on the list to be abolished.

With donations reform and perks for politicians in a huge big glaring spotlight; Australians should be rising up and screaming about situations such as the excerpt below, instead of getting reeled into the agenda set by the media. I’ve seen an overwhelming amount of people absolutely fixated on the Dastyari saga and counter-attacking with dodginess from the Liberals. Meanwhile, in the land of cashless welfare, people can eat plastic or starve! 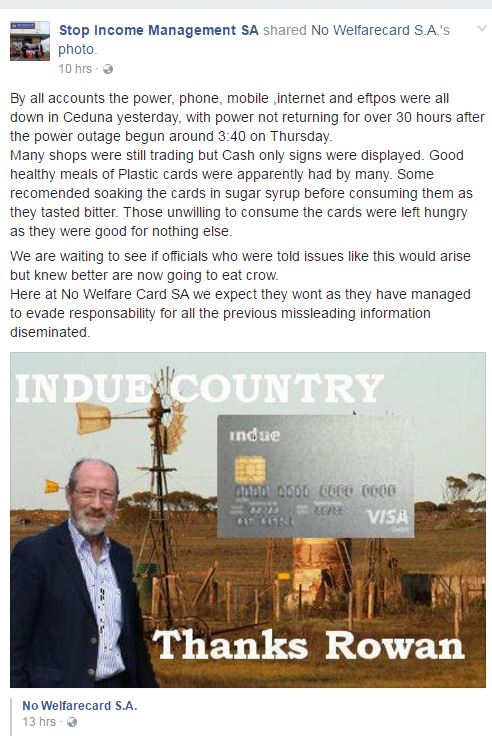 Senators in your state
Senators