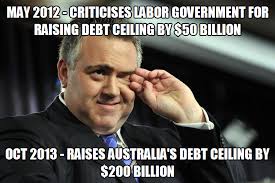 A few days ago, I upgraded the software on my iPad and the $35 million I’d accumulated playing Hold-’em Poker had just disappeared. There I was, back in the Garage with zero to my name.

Ok, it’s not real money so I shouldn’t be too upset, It’s only a game after all. I can just start again. That’s the way the cookie crumbles.But it sort of annoys me that it wasn’t my fault. It wasn’t like I’d gambled it or pushed the wrong button.

My experience with Hold-’em has helped to clarify exactly what’s wrong with the system at the moment.

Let’s start by reminding ourselves about the nature of capitalism. Basically, if I own something then I’m entitled to receive a form of reward for allowing someone else use of it. For example, if I own a house, I can charge someone rent to live in it. If I have money, I can charge interest when somebody borrows it.

Banks began to exist in order facilitate the transactions between the people with the capital and the person wanting to borrow. As such they provided a useful service both by bringing the lender and borrower together and also by spreading the risk so that if a small number of borrowers default on their loan, it’s not a major problem. And by giving slightly less to the lender than to the borrower, they earned money for their service.

Some of you will be saying that these explanations far too simplistic. You’d be right.

Capitalism is a lot more sophisticated these days, but when many people think of money, they still think of it as though it’s gold coins or cash. As though it’s a physical definite thing. But most money exists only as a concept – like my $35 million in Hold-’em. It can be taken away or added to with the stroke of a few computer keys.

(If that’s the case, why don’t people do it more often? Well, they do. But there are certain rules that need to be adhered to. When they’re not, we get the collapse of Enron or the GFC!)

Money is a concept, and if you have the right sort of message, you can make all sorts of things seem reasonable. How else has the government managed to go from a Budget Emergency to suddenly finding more than half a billion to help our security forces and more than half a billion to wage a “humanitarian mission” in the Middle East? Hang the cost, this’ll save lives… (Whereas doctors and hospitals obviously don’t so we need a co-payment there!)

Enron understood just how much of a concept money was, and managed to use it extremely creatively with their accounting system. When they did a deal, they’d count the future revenue was as soon as the deal was done without waiting to see if it actually brought in the revenue promised. However, in the end this was like the cartoon character who runs off the end of a cliff. Everything is fine and he keeps on running until he looks down.

Last week, the man who some call the Treasurer, Mr Hockey, was suggesting that talk of a “housing bubble” was just lazy analysis. To a certain extent, he’s right. Houses, like anything, are worth what people are prepared to pay. After all, why is an original Van Gogh worth millions when you can get a print for just a few dollars? Simply, because it’s unique and someone is prepared to pay for its uniqueness, whereas my painting (the featured image) would be lucky to sell at all.

However, over the long term, real estate rises in line with inflation. In the short term, there are disasters. Either house prices are stagnant – which the papers will tell us is terrible. Or they’re rising too fast for young, first home buyers to get into the market – which the papers will also tell us is terrible. At the moment, it’s the latter. Using things like the median price of a house relative to average earnings, it’s obvious that house prices are quite high at the moment, but that doesn’t mean it’s a bubble. When people start to tell you that there’s money to be made because the normal rules don’t apply and they know of someone who started out with $50 and managed to make themselves richer than Uncle Scrooge in just ten minutes, then there’s a bubble.

When the inevitable crash comes, the media will seek out someone who predicted it. The fact that they’ve been predicting a crash since the 1970s will be regarded as irrelevant -even a stopped clock is right twice a day – and they’ll be asked what should happen now. Inevitably, they’ll say some things that will look good after a crash and nobody will point out that this is slightly different from what they were saying a year ago. (“You said house prices were twenty percent overvalued but as they’ve gone up thirty percent since then, the fact that they’ve only dropped by twenty percent means that they’re still more expensive than when you said they were overvalued. Doesn’t that mean you should be telling us that they’re still to expensive rather than pretending this proves you correct?”)

But rarely do any of these commentators actually point out that part of the problem is how much capitalism has changed. We’ve gone from a system where it was possible to invest your capital conservatively, where the banks were reluctant to take risks, to a system where taking risks is the name of the game. If you place enough bets then some of them must pay off; if you invest in enough things then surely you should finish in front. And if you don’t, well, you just go back to the start. Like my Texas Hold-’em winnings, it’s just a game and the money isn’t real anyway. Where we once looked to the banks to provide a service where they invested our money carefully, they no longer need to worry. After all, they’re guaranteed by the government. Gambling with other people’s money has always been the best way to make sure that you never lose. And if they mislead us – like in the recent CommSec fiasco – well, their prime objective is to make money. Allegedly for their shareholders, but in reality, many are only out for themselves.

Well, that’s the trouble with the Liberals. They tell us that Australia has a terrible debt problem when it’s small, relative to GDP, but ask us to admire companies who are leveraged as far as they can go, because that’s how you make money. You use your capital to borrow. But not if you’re the government, then any debt is a sign that the world as we know it is about to end. Governments – well, Labor Governments anyway – shouldn’t use their capital to improve the future. Education and research aren’t considered investments – they’re just costs that need to be cut.