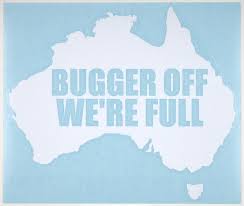 “We can’t take all these illegals, Australia is full!”

“Full of racists, you mean!”

OK, we know where this dialogue is going. The words “Nazi” and “bleeding heart” will be tossed around, but rarely do people ever go beyond abuse once a dialogue starts this way. Personally, I try to focus on the issues rather than simply resorting to abuse like those fascist bastard right wingers do! (See, Andrew Bolt, two can play at that game.) But every now and then it’s fun to bait the angry.

Of course, a lot of things are fun. It doesn’t make them right. We all need to demand higher standards of ourselves – except for Alan Jones and Andrew Bolt who always rise to the highest standards. (No-one can accuse me of lacking balance!)

And so, I write this in a state of some confusion. I’m no Julia Gillard groupie, but I admire her courage and toughness, and I do think that she’s been harshly treated. And I suspect that if I’d gone to school with Rudd, I’d have eventually been so annoyed by him that I’d have rubbed his face in the dirt, until someone pointed out that I’m actually a pacifist, and that I actually agreed with the first statement he made.

Having been on social media, read the paper, listened to the radio, watched TV and, generally, heard the forces of Abbott gloat as though they’d actually won the last election, I must confess: I like watching Rudd restore some sense of reality to these wanna-be “Tea Party” losers. They may still lose! Ha!

Of course, the whole asylum seeker issue disturbs me greatly. So let’s start with the things we agree about.

1. It would be better if people didn’t travel to Australia on unsafe boats.

I’m pretty sure that no-one will disagree with that. The “Stop the Boats Nazis” and “The Bleeding Hearts” and everyone in between.

The question is what is our second point of agreement. Can we agree that a strong deterrent will work? Well, if the strong possibility of drowning isn’t a strong deterrent, what is? So I doubt that will be the second point of agreement. From this point of agreement we spread off in different directions. Some complain that Rudd is no better than Howard. Others gloat that he’s removed an electoral positive from Tony. Yet others say that he’s admitted the Liberals were right. And finally, we have Abbott’s: It’s a good policy, but we think he’ll muck it up, because that’s all we’ve got now.

Will there be number two?

I’d like to think that we could agree to find the best solution possible. That people will be treated humanely, that we won’t resort to slogans. And that something better is possible, providing we think about it.

I mean, actually think, and not resort to emotive language, whichever side you’re on!