I am writing you this open letter as a concerned South Australian. Please don’t shut down your Holden manufacturing business in Australia. I know you are working hard with the big wigs at General Motors in the US, and I know Australia’s most incompetent Prime Minister of all time is making your job really difficult. But I just hope you don’t let Abbott’s stupidity destroy the car manufacturing industry in Australia forever.

I must admit I’m as confused as you are about Abbott’s recent statements regarding government funding to car manufacturers. Before the election it was almost impossible to hold him down to an actual policy, and even when he did provide some detail, the mainstream media didn’t bother to scrutinise any of it. But I did find this reference from August, to something Abbott apparently said:

“If the motor manufacturers want to come to us after the election, obviously they can and we will sit down and we will have an adult discussion with them about trying to ensure that those ­industries have a strong future, because that’s what all of us want.”

Note the word ‘adult’. I guess that sort of statement put lots of uninformed voters at ease. But what’s not putting anyone at ease now is the realisation that the words Abbott used to describe his potential behavior as Prime Minister appear to be the opposite of how he actually intended to behave. Calm. Mature. Adult. More like rabble. Chaos. Childish. Joke.

In fact, Abbott’s government is turning out not just to be a comedic joke, but is actually becoming depressingly dangerous. And their shenanigans in their negotiations with your business could be their most damaging legacy. I’m guessing you, like me, are beside yourself with rage that Abbott would be so flippant about a decision that is going to destroy the lives of thousands of Australian workers and their families. I know you know all these facts, but I’m reminding you again to show just how serious this situation is. In Adelaide, Holden’s decision to leave Australia could cost 30,000 jobs when you include all the component and parts manufacturers becoming unviable after Holden leaves. Anyone with the ability to count can easily understand the economic equation in favour of providing government funding to Holden to enable you to keep producing cars in Australia. Quite simply it will cost the country far less in monetary and social costs to give Holden government funding to stay, rather than paying possibly generations of jobless members of our community a lifetime of unemployment assistance once their industry disappears.

All us rational thinkers understand why every car producing country in the world provides government assistance to car manufacturers. The benefits of keeping a manufacturing industry alive instead of crushing communities through endemic unemployment are impossible to quantify in monetary terms only. But the problem we’re facing is that the man who is in charge of the decision to provide the government assistance your company needs to justify making cars in Australia, is too incompetent to make the right decision. You see Mike, as I’m sure you’re finding, this is all a big game to Abbott. He thinks he’s playing chess with you, but the problem is, he doesn’t even know how to set up a chessboard. He’s currently bouncing sideways like a broken ping pong ball, reiterating that the government won’t give any more funding to car manufacturers, whilst also contradicting himself by putting off an official announcement until after the Productivity Commission delivers their report, whilst also ignoring your very clear deadline of Christmas this year. And now he’s saying he wants Holden to clarify your position, after his government colleagues have been leaking to the press about your apparent plans to shut down, which no one at Holden can confirm as fact. This is beyond chaos. This is farcical. 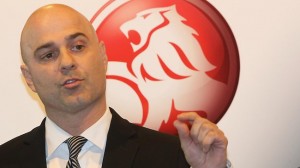 We just need you to hold on Mike, and don’t let Abbott put you off Australia. I’m really sorry about his behaviour. I’m sorry this country was fooled by three word slogans. I’m sorry so much of the business community got behind Abbott too. To think, Abbott claims his government is open for business. But apparently, Mike, no one read the fine print on this slogan. You see, Abbott is only open for business if you are open to helping him, personally. He doesn’t care about Holden workers’ jobs. He only cares about him and his mates. Like Gina Rinehart who is set to reap great returns from her investment into Abbott’s campaign, with Abbott currently working to remove the Mining Tax just for her and her fellow fat cats. And in doing this, he’s getting rid of tax revenue which could easily be used to fund the very affordable assistance to car manufacturers to keep you employing Australian workers. I can’t understand why even the most disengaged voters can’t see that this whole situation is blatantly ridiculous.

And that’s the other thing that upsets me about Abbott’s stupidity. Rinehart’s mining industry, which gets various types of government tax-breaks and subsidies, employs only around one seventh of the number of South Australians employed in manufacturing in this state. And Rinehart can’t take her business elsewhere because the dirt she needs is here. If she is forced to pay a super-profits tax on her already outrageous profits, that’s no disincentive for her to run her business here, because she can only make the money here. This is how her father set her up for a million consecutive lifetimes of fortune. But Holden cars can be made anywhere. Anywhere a government values employment and productivity growth. Anywhere a government understands the multiplier effect of investing in an industry to support the economy. This is simple economic theory. Again, I know you know this, but I’m just trying to show you that I feel your pain.

I implore you Mike. Don’t let Australia’s village idiot of a Prime Minister ruin this great country through sheer ideological fundamentalism and intellectual inadequacy. And please let me know if there’s anything I can do to help keep Holden here.