When I recently saw a photograph of Julie Bishop’s boyfriend David Panton sitting next to her in the official delegates section on the floor of the United Nations General Assembly, I wondered what the reaction would have been if that was Tim Mathieson sitting next to Julia Gillard. Imagine the outrage, the questions, the accusations.

For some reason, Julie Bishop has been treated entirely differently to Julia Gillard in so many ways.

When Ms Gillard did a photo shoot for an article in the Weekend Australian, Julie Bishop accused her of behaving like a “fashion model or TV star” rather than a politician, adding that posing for magazine covers was “not my style”. 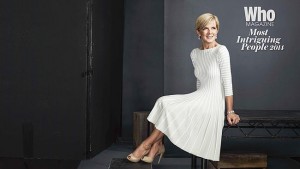 In the last two years, Bishop has appeared in Who Weekly, The Australian Women’s Weekly, Harper’s Bazaar and Marie Claire talking about her portfolio as well as fashion and fitness.

Unlike Gillard she has not been criticised for her magazine profile or her cultivation of social media and the blogosphere.

When Scott Morrison talks about childcare funding there is no Sophie Mirabella screeching from the other side to the childless Bishop “You won’t need his taxpayer-funded nanny, will you?”

There is no Bill Heffernan suggesting she is unfit to lead Australia because she is “deliberately barren” or George Brandis labelling her as “one-dimensional” because of her decision not to have children.

Bishop has largely avoided scrutiny of her time as a lawyer and her treatment of dying litigants as well as her very brief tenure as shadow treasurer.

She has never been grilled by radio shock jocks on the private lives and business dealings of her various partners.

Rather than having Germaine Greer telling her she has a fat ass and Anita Quigley telling her to “get a stylist her own age”, Bishop is always described as “stylish”. When, as deputy, Julie Bishop stabbed a first-term sitting Prime Minister in the back she was just doing her duty. Perhaps it was acceptable because she didn’t have the temerity to think she could be leader. Why would she when she is “living the dream” as Foreign Minister.

Did Julia Gillard cop the abuse because she was the first female PM? Was it because of the nastiness of the Abbott era unleashing the hounds? Was it due to the vitriolic campaign by conservative commentators and the Murdoch press?

Or was she just not pretty enough?