Breaking news! “In light of the complex and challenging security environment facing Australia” Abbott has made another captain’s call; the amendments to section 18c of the racial vilification act are now officially “off the table”.

Apparently while it was perfectly OK for shock jocks to indiscriminately hurl racial abuse a few months back, what we NEED now, as a nation, is to set aside what divides us so we can all come together in a big warm fuzzy hug of national unity.

That is, of course, except for when we come together in collective condemnation of anyone who has been to “a designated conflict zone”.

Under new legislation on the Coalition drawing board, any “Aussie” so stupid as to go to “a designated conflict zone” without having the forethought to film their entire visit, (as proof they are not a terrorist), could be jailed without proof, refused re-entry, expelled from the country, or simply have their their citizenship revoked, all without any proof whatsoever they did anything wrong.

While I can’t pretend I am not pleased that the racial vilification act has survived Abbott’s ill thought out onslaught, I must confess to being somewhat skeptical as to the motivations for his back down.

I am quite sure someone within the LNP has pointed out that, given his abysmal standing in the polls, it might be better to pick his battles. With his reforms to 18c almost universally condemned (and looking set to face defeat), and with the budget stench still clouding the air, maybe it might be prudent to throw us a bit of a feel good bone, particularly when a much more Machiavellian ambition – to establish a legal precedent for the removing the burden of proof – could be at play. 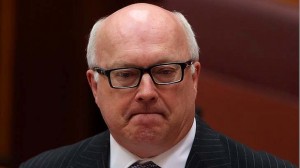 But then again maybe I am over thinking this, maybe it is just because, as Guy Rundle wrote this week in the Saturday Paper, “if George Brandis gets rolled on 18C, he will have no honourable choice but to resign as attorney-general”, and Abbott doesn’t want to lose a high profile scalp right now.